2 The Point News » Kelly's Panorama » Members Only » THE DEAD HEN 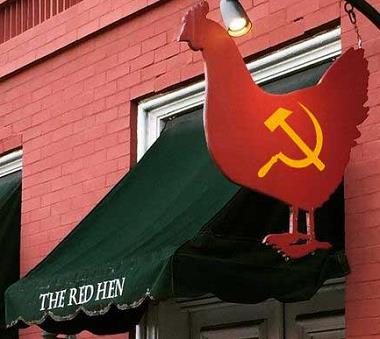 The Red Hen restaurant in Lexington, Va. has been getting lousy reviews on Yelp! ever since owner Stephanie Wilkinson denied service to Trump press secretary Sarah Huckabee Sanders and her family last Friday night. Here is one of the most devastating, from an expert in the hospitality industry:

A transplant from New York, Ms. Wilkinson is a cousin of actress Meryl Streep. Here’s a photo of Ms. Wilkinson with her husband and son, wearing pink pussy hats at a demonstration in Washington D.C. 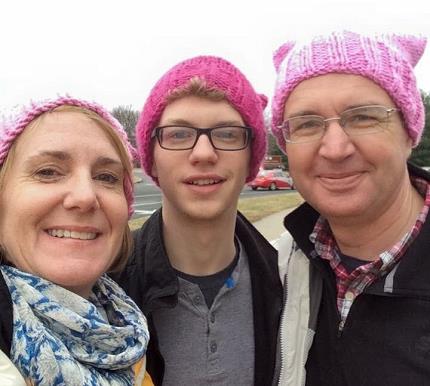 “I just served Sarah huckabee sanders for a total of 2 minutes before my owner kicked her out along with 7 of her other family members,” a waiter posted on Facebook.

Ms. Wilkinson then organized a protest at the restaurant across the street where the Sanders family went to eat after being kicked out of the Red Hen, Sarah’s dad said. 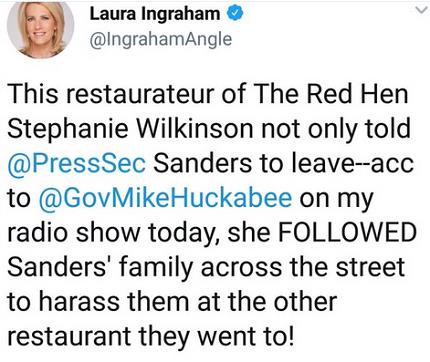 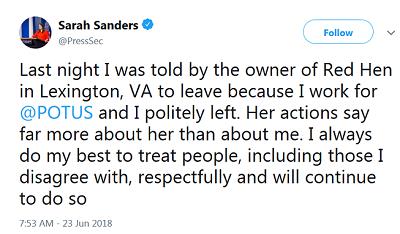 Sarah’s tweet generated lots of angry telephone calls and emails to the Red Hen, which was closed this weekend, I assume because of the hostile reaction of Trump supporters.  On Saturday night (6/24), their busiest, a local reported:

Ms. Wilkinson’s virtue signaling is proving to have been a bad business decision.

So Ms. Wilkinson is doing what leftists typically do when their bullying backfires. She’s claiming to be the victim.

You can read in this Washington Post story about how hard Ms. Wilkinson felt morally obligated to take a stand against Trump’s “inhumane and unethical” administration.

And now, because of the big meanie press secretary’s tweet, the Red Hen may be driven out of business. Boo hoo hoo. Soooo unfair!

Simply by mentioning on her official email account she’d been kicked out of the restaurant, Sarah Sanders may have violated ethics rules, said “former White House ethics chief” Walter Shaub.

I bet you can guess during which administration Shaub was the “White House ethics chief.”

Spare us this bit of hypocrisy, leftist dirtbags. Sarah was telling her side of the story in response to the Facebook post, which she had every right to do.

I’m delighted Sarah did. I don’t expect to be in Lexington Va. again anytime soon (it’s a lovely little town, home to the Virginia Military Institute and Washington & Lee university), but if I do go back, I’m glad to know not to eat at the Red Hen.

I very much hope Ms. Wilkinson will be driven out of business, that that snotty waiter will lose his job. I’d like to do whatever I ethically can to bring that about.

The First Amendment says the government may not prevent you from saying what you want to say (no prior restraint). Nor may the government prosecute you for whatever it was you said.

But the First Amendment will not spare you from other consequences if what you say or do gravely offends others.

A healthy society has three types of sanctions against bad behavior.

Criminal law does not apply to speech, except for inciting to riot, which has been a crime almost everywhere for lo these many years; or, as Justice Oliver Wendell Holmes said, for “shouting fire in a crowded theater.”

Under civil law, if you say something you know is false that causes injury to another person, you can be sued for libel or slander.

Finally, there are social sanctions. If what you say peeves, say, your employer, you could lose your job. And other people have as much right to say bad things about you as you have to say whatever it was that teed them off.

The hypocrites say we’re hypocrites to be angry at Ms. Wilkinson because we don’t think Christian bakers should be required to bake wedding cakes for gay marriages.

We acknowledge Ms. Wilkinson’s right to deny service to Sarah. But we think that was detestable, and we want her to pay a price for it.

Boycotts are typically a leftwing thing, but what goes around comes around.

Leftists don’t think the rules should apply to them. The wonder is not that we won’t put up with this double standard any longer. The wonder is that we tolerated it for so long.

We shouldn’t treat leftists the way they treat us, because then we’ll be just like them, say NeverTrump scolds who think losing with an air of superior morality is better than winning. Evan Sayet had the decisive answer to that in TTP last January. We can’t win the culture war unless we fight the culture war.

We must make leftists pay a price for bad behavior, or they’re sure to escalate to real violence.

“We will not stand by and let Sec. Nielsen dine in peace, while she is directing her employees to tear little girls away from their mothers and crying boys away from their fathers,” thugette Margaret McLaughlin of the Democratic Socialists of America told the New York Times.

We should strive to drive the Red Hen out of business, recognize this could take weeks, maybe months. So for weeks, maybe months, we should make dinner reservations we don’t intend to keep, post negative reviews on Yelp! and Trip Advisor, clog their email with vituperative messages.

Those who live nearer Lexington should organize group visits, see the sights, spend an hour or so picketing the Red Hen, then have dinner in a nearby restaurant.

We should confront Ms. Wilkinson at public events (but not at her home). We should post online her address, and that of her employees. No threats. That’s what leftists do. We just want them to know we know who they are and where they live.

This goes double for the Communist thugs and thugettes of Antifa and DSA. We should find out who they are, where they live, and for whom they work. Then ask their employers if they approve of their conduct.

When Members of Congress, such as Maxine Waters, indicate they do, we should demand they be formally censured.

If we go to places where we might be accosted, we should have non-lethal means of protecting ourselves.

Top of the line are tasers. I’m taking a hard look at this one, which is shaped like a pistol, is about the size of a .22 Beretta, has a range of up to 15 feet, can be fired up to 50 times before the battery needs to be recharged.

This pepper spray gun has a range of up to 150 feet, with a kinetic energy of a 50 mph fastball. I’m taking a hard look at this one.

James Woods, however, differs a bit.  Here’s his advice: