THE DAVOS ELITE PREPARES TO BOW TO TRUMP 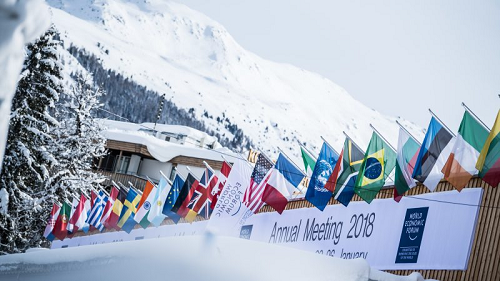 The US economic cabinet – Steve Mnuchin at Treasury, Wilbur Ross at Commerce, Rick Perry at Energy – said America has long been the victim of daily guerrilla warfare by trade hypocrites and is at last drawing its own sword in response, no longer willing to tolerate what it deems to be systematic gouging of the open US market.

“Trade wars are fought every single day: every single day there are always parties violating the rules and trying to take unfair advantage of things,” said Mr. Ross. “So a trade war has been in place for quite a little while. The difference is, US troops are now coming to the ramparts.”

Mr. Ross denied that President Donald Trump is retreating into commercial isolation, insisting that the blizzard of 84 separate trade measures, probes and sanctions over the last year are a response to mercantilist abuses that have been tolerated for far too long.

“What has provoked a lot of the trade actions is inappropriate behavior on the part of our trading counter-parties.  Many countries are good at the rhetoric of free trade but actually practice extreme protectionism, and that is a problem the president is quite determined to deal with.”

The Commerce Secretary said the US is invariably accused of protectionism whenever it tries to defend itself, but this is how others mask their own self-interest.

The White House is deeply irritated over the way foreign leaders – China’s Xi Jinping, India’s Narendra Modi, and some of Europe’s political class – exploit the Davos forum to pose as the defenders of free markets, when in reality they game the system in subtle ways with covert barriers, tax distortions or currency manipulation. In China it is often blatant.

President Trump’s team – the largest contingent ever to descend on this congested Alpine enclave – aims to turn the tables by pointing fingers and going on the rhetorical offensive. It may be an uphill task after the US was badly outflanked this week when eleven countries revived the Trans-Pacific Partnership (TPP) without the Americans, a doubly-galling development since Japan, Canada, Australia, and other ring leaders are normally US strategic allies.

Treasury Secretary Mnuchin sought to play down the embarrassment, insisting that America is “open for business” and eager to forge bilateral deals on an equal footing. “We absolutely believe in free and fair trade,” he said.

Mr. Mnuchin came close to inviting a further speculative attack on the US dollar, pointedly failing to talk up the currency when offered the chance by reporters “The dollar is one of the most liquid markets,” he said. “Where it is in the short term is not a concern at all. Obviously, a weaker dollar is good for us as it relates to trade and opportunities.”

The comments instantly sent the dollar index (DXY) into a fresh tailspin, tumbling to a three-year low of 89.67 and breaking through the psychological barrier of 90. It touched $1.2355 against the euro as hedge funds increased their record “short” positions on the Greenback.

The currency markets have clearly concluded that the Trump administration is trying to hold down the dollar, perhaps to offset any potential repatriation effect from US tax reform, which could lead to a homeward rush of corporate earnings held abroad.

Mr. Mnuchin dismissed suggestions that both global equities and Wall Street are becoming dangerously frothy and may be entering a full-blown bubble – a fear expressed sotto voce by many in Davos.

“What you see in the US stock market is a reflection of the economic program we’ve put in place, obviously not just lowering tax rate, but reforming regulation and the pro-US business cycle,” he said. “As we look at US economic growth versus the rest of the world, the US continues to look quite good.”

Wilbur Ross left little doubt that the coming weeks will be a stormy time for US trade policy, with talks over the North American Free Trade Agreement (Nafta) in danger of breaking down and a string of disputes with China over steel, aluminum, and intelectual property coming to a head.

Washington kicked off this week with stiff tariffs on solar panels and washing machines, to the fury of China and Korea. The US ambassador to the World Trade Organization fought a rearguard battle in Geneva against a 60-strong group of states demanding that Washington halt its blockade on appointments to the WTO court, brushing aside pleas that America’s hard line is wrecking the institution.

Mr. Ross adopted a steely tone in Davos. While acknowledging that China and other states may retaliate, he advised them to think twice before pulling the trigger. “You should also be aware to the degree that there is retaliation, there is the question of what does the US in turn do,” he said.

All sides suffer in a trade war, but the lesson of the 1930s is that those countries running a structural trade surplus (their poster child is China) ultimately suffer more.

The Davos elites may have to bite their tongues this year. They are dealing with an administration that no longer accepts the etiquette and codes of the cozy status quo.