THE DANGER OF SOCIAL MEDIA MONOPOLIES MUST BE ENDED NOW 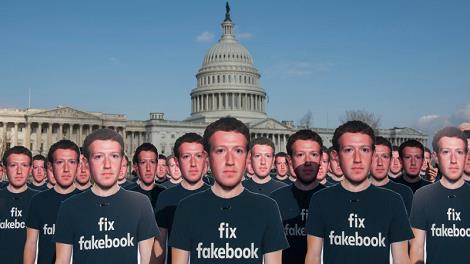 Facebook, Twitter, and Google are far worse than the original monopolies like International Harvester and Standard Oil and far more dangerous because they monopolize not just our industries but our brains. They control, or at least inordinately influence, how Americans and even much of the world think.

The news that Facebook has “trust” scores for users but will not reveal them to those same users is, to put it mildly, distressing. One wonders what the trust score of, say, George Orwell might have been. That Animal Farm was inflammatory stuff. And how about Aldous Huxley, the drug abuser who wrote Brave New World?

And what about you and me? How does that make you feel when your random comments and opinions are being cataloged for future use as they would be in a Stalinist police state? It’s one thing for the government to do that — and they do — but another for media that are so pervasive their reach dwarfs government.

Indeed, Facebook has a lot in common with Communist China these days. From the Daily Mail: Communist China will use a ‘social credit score’ to rank it citizens and give those with the most favored behavior perks.

Oh, but these people are liberals. They  are “good.” As the great Italian playwright Luigi Pirandello once said, “It Is So If You Think So.”

But before we discuss a cure, let’s examine how this can of digital worms came to be. The titans of social media are all relatively the same age. They and most of those who work for them are products of the same pervasively liberal educational system of rigidly enforced political correctness that begins at a very young age and accelerates through college.

It’s no wonder that they think within those constrained boundaries and almost inevitable that these same values would be reflected in the algorithms they construct to monitor their sites. Garbage in/garbage out.

It should not be in the least surprising that the mildest of rebellions at Google — a tentative, almost circumspect questioning of whether gender had more influence on our lives than dictated by PC culture — resulted in the expulsion of the rebel, James Damore.

Further to this education, it’s likely the leaders of these companies and their many minions, including those who write the algorithms, had little exposure to the principles of the founding fathers of our country or the European thinkers — Locke, Montesquieu, etc. — who influenced them.

They are largely ignorant of concepts of freedom and liberty that are glossed over in our schools, especially for young people whose studies emphasized tech and business.

The Zuckerbergs of the world and their cronies act like people who are so conventional in their thinking and so wedded to their puerile version of “liberalism” (not to be confused with “classical liberalism”) that they don’t seem to realize their enforcement methods veer to the totalitarian (cf. the unconscionable censoring — excuse me, “restricting of access” — of PragerU by YouTube).

Or they simply don’t care and will do anything to get their critics off their backs and continue their quests for wealth and power.

The most obvious solutions are either to boycott them or to start alternative institutions, both of which have been tried to some extent.

This approach, good as it sounds and consonant as it is with free market ideals, is unfortunately naïve and out of synch with the lives we are living. The first mover advantage of the tech giants is tremendous. It is hard to see how they will be replaced, at least in the short run.

So we are left with the uncomfortable specter of government regulation, something we “classical liberals” (read: modern-day libertarians) decidedly dislike. Yet we seem to have no choice. Social media have become a form of supra-government, more influential than the government itself, infecting the world almost like a living organism.

We do, however, actually have a choice — government-enforced deregulation. Legislation could be passed forbidding social media from keeping anybody out, censoring anybody, excepting a very few people such as child pornographers, already against the law.

Yes, I know these are private companies entitled to do anything they wish, but a line has been crossed that few ever anticipated. These entities have become the primary arenas of free expression in the world. They can exercise more control than any government. This cannot and should not be allowed to continue.

It should not, in fact, be allowed to continue past Labor Day (Sept 3rd), when the political campaign season begins.  The damage the social media monopolies can do to the viability of our electoral system between now and November 6th is gigantic and may be irreparable unless ended now.