THE CRIMINAL REFERRAL ON CLINTON, COMEY, AND LYNCH 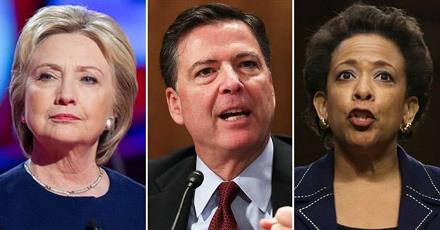 Congressional lawmakers made a criminal referral yesterday (4/18)to the Department of Justice Attorney General Jeff Sessions.

It was against former senior-level Obama administration officials, including employees of the FBI connected with the unverified dossier alleging collusion between the Trump campaign and Russia, as well as those involved in the warrants used to spy on a former Trump campaign volunteer.

The lawmakers also made a criminal referral on former Attorney General Loretta Lynch and threats made by her DOJ against the FBI informant, who provided the bureau with information on the Russian nuclear industry and the approval in 2010 to sell roughly 20 percent of American uranium mining assets to Russia.

All for their involvement in the investigations into President Trump and alleged violations of federal law.

Here is the Congressional letter of criminal referral in its entirety.  The letter states:

“We write to refer the following individuals for investigation of potential violation(s) of federal statutes.

In doing so, we are especially mindful of the dissimilar degrees of zealousness that has marked the investigations into Former Secretary of State Hillary Clinton and the presidential campaign of Donald Trump, respectively.

Because we believe that those in positions of high authority should be treated the same as every other American, we want to be sure that the potential violations of law outlined below are vetted appropriately.”

Page worked as a volunteer advisor for the Trump campaign and the information in the dossier was used in bulk by the FBI to obtain the warrants to spy on him.

“Accordingly, we refer to DOJ all DOJ and FBI personnel responsible for signing the Carter Page warrant application that contained unverified and/or false information for possible violation(s) of 18 USC 242 and 18 USC 1505 and 1515b,” the criminal referral states.

It refers to a letter drafted by House Intelligence Committee Chairman Devin Nunes to Sessions this March.

The lawmakers noted that Comey “engaged in questionable conduct vis-à-vis President Donald Trump,” and referred to an article reported by The New York Times, in May 2017, which highlighted memos leaked by Comey to a friend that was given to the paper.

In the criminal referral letter, the lawmakers state that “Comey wrote memoranda detailing alleged conversations between himself and President Trump, creating ‘a paper trail’ for ‘documenting what he perceived as the president’s improper efforts to influence a continuing investigation.’

The New York Times article reports that Comey “created similar memos – including some that are classified – about every phone call and meeting he had with the president,” the letter states.

The criminal referral also notes a Jan. 3, 2018, letter to Deputy Attorney General Rod Rosenstein from Chairman of the Senate Judiciary Committee Charles Grassley, where committee staff reviewed the memoranda created by Comey in a Sensitive Compartmented Information Facility due to the classified nature of the majority of the memos; of the seven memos, four were marked classified at the “SECRET” or “CONFIDENTIAL” levels.

Comey, whose book A Higher Loyalty, released this week, argued that his memos were personal reflections about his meetings and conversations with Trump, but admitted that some contained classified material.

According to FBI policy, however, the bureau forbids any agent from releasing classified information regarding ongoing investigations or sensitive operations without prior written permission. The bureau also mandates that all records created during official duties are considered to be government property.

“In light of the fact that four of the seven memos were classified, it would appear that former Director Comey leaked classified information when sharing these memos with Professor Richman. Accordingly, we refer James Comey to DOJ for potential violation(s) of 18 USC 641, 18 USC 793, and 18 USC 1924(a),” the letter states.

The congressional members also are referring former presidential candidate Clinton for her role in the dossier, assembled by former British spy Christopher Steele, who was hired by a cutout, now-embattled research firm Fusion GPS.

After months of investigations by Congress, it was eventually discovered that the dossier was paid for by the Hillary Clinton Campaign and the Democrat National Committee. However, the campaign did not reveal that they had allocated money to pay for the research on their disclosure forms, according to congressional members and news reports.

“A lawyer representing the Clinton campaign and the Democrat National Committee paid Washington firm Fusion GPS to conduct research that led to the Steele dossier, according to an October 24, 2017, report in The Washington Post,” the letter states:

“Accordingly, for disguising payments to Fusion GPS on mandatory disclosures to the Federal Election Commission, we refer Hillary Clinton to DOJ for potential violation(s) of 52 USC 30121 and 52 USC 30101.”

Lynch was referred after concerns were made regarding her decision to threaten with reprisal the former FBI informant, William Douglas Campbell, who first came forward in 2016 with insight into the sale of the Canadian firm Uranium One, which controlled nearly 20 percent of uranium mining interests in the United States.

Campbell had filed a lawsuit in Maryland federal court in 2016 against the Russian companies he was employed with and which he had kept tabs on for the FBI. He was asking for the return of the money he had to launder out of his own paychecks and had sent a Freedom of Information Act request to the DOJ for information on his case.

According to a letter written by Campbell’s previous attorney, the DOJ threatened to destroy Campbell’s reputation and prosecute him for violating a non-disclosure agreement he had signed with the FBI.

The criminal referral on Lynch is regarding “potential violation(s) of 18 USC 1505 and 1515b,” according to the letter.

As for  Strzok and Page, the two FBI employees at the center of the Congressional investigations, the lawmakers seek the criminal referral based on the pairs “interference in the Hillary Clinton investigation regarding her use of a personal email server.”

The lawmakers point to a Jan. 22, The Wall Street Journal article regarding the Justice Department’s second release of text exchanges between Strzok and Page, and revealed that the texts “show the FBI also eliminated evidence that Mrs. Clinton compromised high-level communications.”

“The report provides the following alarming specifics, among others: ‘Mr. Strzok texts Ms. Page to tell her that, in fact, senior officials had decided to water down the reference to President Obama to ‘another senior government official,” the criminal referral states referring to the article.

Other recent documents obtained by congressional investigators also suggest possible coordination by Obama White House officials, the CIA and the FBI into the investigation into President Donald Trump’s campaign. According to those documents, the senior Obama officials used unsubstantiated evidence to launch allegations in the media that the Trump campaign was colluding with Russia during the run-up to the 2016 presidential election.

The documents also reveal that former Senate majority leader Harry Reid, D-Nevada, sent a letter on Aug. 29, 2016, asking former FBI Director James Comey to investigate the allegations, which were presented to him by then CIA Director John Brennan.

Brennan had briefed Reid privately days earlier on the counterintelligence investigation and documents suggest Reid was also staying in close touch with Comey over the issues.

Sara A. Carter is a nationally known investigative reporter and Fox News Contributor.  Her favorite hobby besides exposing deceit in journalism, is practicing foreign accents in order to embarrass her family in public settings.