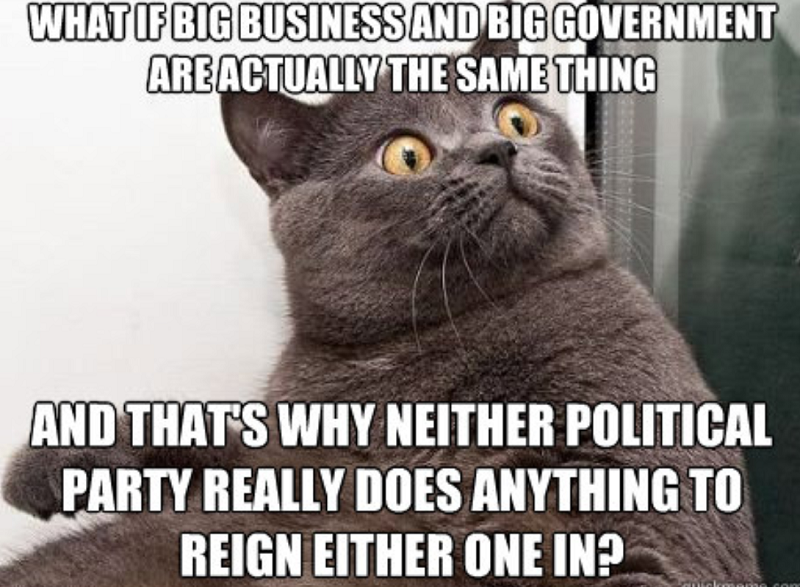 Politicians, when they are running for office, claim they love and support small businesses — but many of them lie.

Over the last three months, the political class has waged an intense war against those people who have risked their savings and countless time and effort to build viable small businesses — including personal and business services, restaurants, etc.

Business owners were told that they must shut down because of the spread of COVID-19 — and that mitigation actions such as distance limitations and enhanced cleaning would not be enough — unless, of course, you happen to have a big business like Walmart, Target, a major food chain, Home Depot, etc.

Millions of small businesses sell some subset of the same merchandise and services that are sold in the big stores. If you buy a 60-watt lightbulb in CVS, Home Depot or Joe’s neighborhood hardware store and stand six feet from the nearest customer, the chance of contracting COVID-19 is roughly the same.

Your chance of dying is much more a function of your age and overall health than where you buy a lightbulb.

But never mind the evidence. The big-store chains love the fact that politicians have made it illegal for smaller enterprises to compete with them. Do you think the politicians might be rewarded for doing the dirty work for the big guys during this political fund-raising cycle?

What has been happening has little to do with public health, but much to do with political corruption.

It appears that Jeff Bezos of Amazon — the world’s richest man — has seen his wealth grow by tens of billions over the last three months. When people could no longer go to stores to shop, they had to turn to Amazon and a few of the other online retailers. How much do you think Mr. Bezos is going to donate to the campaigns of those politicians who made him much richer?

People are getting wise to the scam of allowing big stores to remain open while criminalizing the small guy for the exact same activity.

Fortunately, courts are increasingly siding with the small-business owner — equal protection under the law, etc.

But the COVID-19 racket to destroy small business has not been enough for some politicians. In a number of cities where the riots have occurred, the police have been ordered to stand down or in other ways not to protect small businesses.

Yes, a few big-chain stores have been looted and even burned, but the damage to their bottom line has been minimal compared to the losses suffered by small business owners.

The response to the riots, by mostly Democrat mayors and governors, has further tilted the balance against the small entrepreneurs who do not have the deep pockets to pay off the politicians with campaign contributions, luxury travel or whatever.

Members of the government establishment and their allies now tell us that it is dangerous and illegal for small businesses to open to serve the wants, needs and desires of the public, and to create jobs — but it is good for people to cluster in large numbers and demonstrate against the police.

And oh, if some thousands of small businesses are destroyed in the process, well, that is too bad. It gets worse, some big media like CNN (which is owned by AT&T) encourage mayhem because it boosts ratings.

Many political leaders, rather than jailing the looters and arsonists, are pushing to get rid of the police. How do you think that’s going to work out for the neighborhood businesses and the public at large?

Studies are being suppressed that show COVID-19 is fatal for relatively few, except for the elderly who are suffering from major health problems — and that many people (perhaps even a majority) seem to have some natural immunity.

One of the best studies was done by Professor Anne Marie Knott of Washington University in St. Louis which I reported on in TTP: Hey America, Stop Worrying! (5/26). As could be predicted, she was immediately attacked by those who did not like her message. So, rather than cower to the mob, she expanded her study.

The preliminary data show that those countries, states and localities that were quicker to remove the heavy foot of government from small businesses and others are doing as well, if not better, than others in reducing COVID-19 deaths.

Some lessons are already clear. Small businesses should open despite executive orders (which are not laws) to stay closed — then challenge the authorities in court. (People who are fearful can voluntarily stay home.)

Those small-business people who are in communities where the laws against looting and arson are not enforced need to form armed community groups for mutual defense, which was common practice before the rise of professional police forces.

And finally, vote those politicians out of office who refuse to enforce the laws against looting and arson, but seek to restrict individual gun rights — leaving only the rich, well-connected and corrupt with personal security protection.