2 The Point News » Guest Authors » Members Only » THE CORONAVIRUS PASSPORT 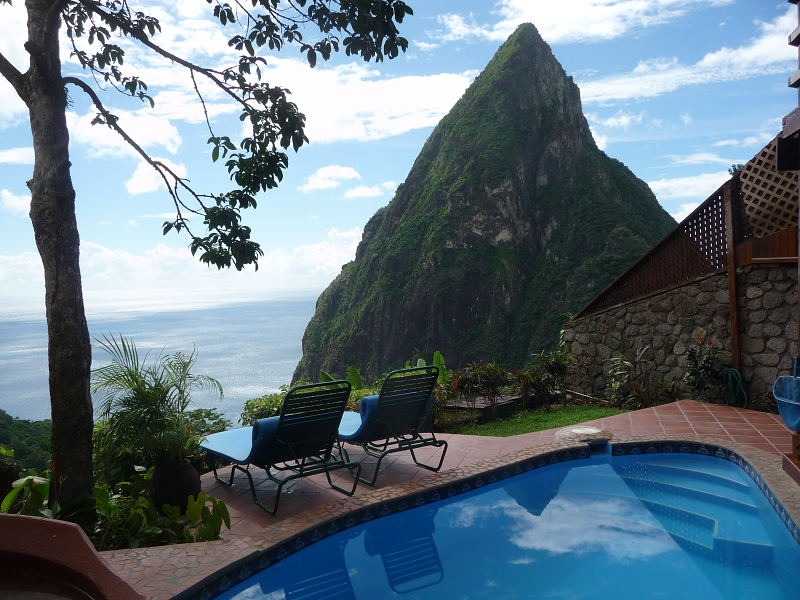 I’ve been a avid TTPer for some years now.  In that time I’ve gotten to know Jack, talking geopolitics applying to my specialties as an international lawyer — offshore banking, international trusts, and asset protection in foreign jurisdictions.

When I told him the other day about one of his favorite countries – St. Lucia in the Caribbean – and its “Coronavirus Passport,” he asked me to tell fellow TTPers about it.  So here we go.

The Coronavirus Pandemic that has been swamping the world the last six months and has brought death, destruction and economic devastation in its wake.  One silver lining in all of this negativity, however, for those seeking to protect themselves and their families, has been in the second passport arena.

A number of countries have rethought their Citizenship by Investment Programs (“CIP”) to make them more attractive as a way to attract international investment to replace government revenues lost to Covid19.

The value of any regular passport is determined by the number of countries to which one can travel without a visa (visa-free or on-arrival).  According to the Henley Passport Index, the current best passport in the world with visa free travel to 191 out of the world’s 199 jurisdictions is Japan.  The United States is at 185.  Afghanistan is last with only 26 countries.

The Caribbean countries are more/less clustered together, from Barbados at 161 to Dominca at 140.  St. Lucia is at 146.  I do not consider those differences to be material when compared to each other in determining the value of a passport.

Each of these countries are looking to make their CIP programs more attractive, but none have done so more than the country of Saint Lucia.  It has literally reduced its “Citizenship bond” temporarily by 50% making it the current top selection for bargain hunters.  Some are even referring to the current “nationality special” as the “Coronavirus Passport”.

Saint Lucia is in the middle of Lesser Antilles island chain of the Eastern Caribbean from St. Kitts to Grenada.  It was one of the most fought over land masses in history, changing its colonial ownership fourteen times between 1650 and 1814 when it became a British Colony.

It retains a strong influence from France in its food, language and culture.  It was nicknamed “Helen of the West Indies” (in reference to the Helen of Troy) due to all of the fighting which took place there. All 19th century history now.  It became an independent state on February 22, 1979 and is a member of the British Commonwealth with Queen Elizabeth II as its ceremonial Head of State.

Today, St. Lucia is as peaceful and charming as can be. It currently ranks in the Top 25% of the countries in the world according to the Heritage Foundation 2020 index of Economic Freedom, and the 7th freest economy among all 32 countries in the Americas (the US is #3, Venezuela is dead last). 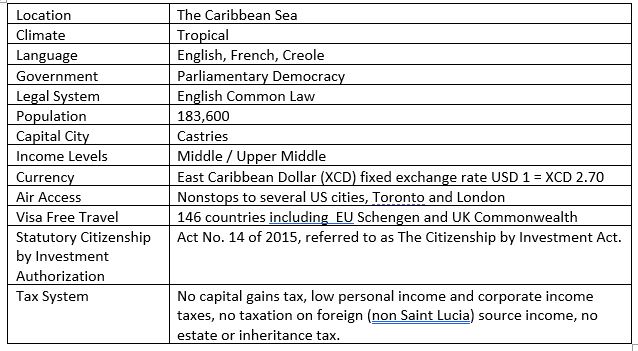 Saint Lucia’s Standard Citizenship by Investment Options include the following:

This is a non-refundable monetary contribution to the Saint Lucia National Economic Fund.  It is the most economical option which for a single applicant is $100,000.

This is a zero interest bond for which the principal is returned after five years.  The Saint Lucia Government has never defaulted on one of it bonds, so the Citizenship Bond is a relatively safe investment.  In comparing the bond with the single pay option above, the crossover is 4%, meaning if you earn more than 4% on average for your investments, it is cheaper to do the single pay option.

This investment option may be in one of the following 7 broad categories:

A minimum investment in this category to qualify for Citizenship is $3,500,000.

In addition to all of the standard options outlined above, there is for the short term a fifth and quite interesting option for investors seeking a second passport, the “Coronavirus Bond” option.

On May 12, 2020 the Parliament of Saint Lucia approved the issuance of a new emergency Coronavirus Bond as the basis for citizenship.

The crossover between the $100,000 single payment and the $250,000 bond over 5 years equates now to roughly an annualized return of 8% which makes it a much better ‘deal” for international investors seeking a second passport.

In addition, the Government of Saint Lucia incorporated changes in the law to expand the definition of “dependents” to include children up to age 30 (from 21), special needs children of any age, elderly and financially dependent parents and even adult siblings in some cases.  These changes will make the Saint Lucia options more attractive to a wider cross section of the public.

All of these options require additional one time legal fees, registered agent fees, back ground check fees and Government application fees that range from $25,000 to nearly $100,000 depending on the option selected and size of your family.

In conclusion, Saint Lucia is currently one of the best Citizenship by Investment available at this time.

The basic single investment application for $100,000 is one of the least expensive programs in the Caribbean for what is truly a very solid and high quality passport.

The current Coronavirus Bond option is the only option of its kind presently available although it appears several other Caribbean countries are considering similar discounted single payment or bond options. (Dominica has already signaled that it plans to follow Saint Lucia in creating its own “Coronavirus Bond.”)

The Saint Lucia expedite service option and the Immigration Department’s willingness to accept scan copies of documents and forms to initiate the process is also unique in the current lockdown environment.

You could literally have your new citizenship documents by Labor Day for anyone deciding to move forward with the Saint Lucia Citizenship by Investment Program right now.

If this interests you and would like to talk about it, I’m at [email protected].  Thanks… Joel

Joel Nagel is founder of Nagel & Associates LLC in Pittsburgh PA, an international law firm specializing in international corporate strategy and legal structures. He can be reached at [email protected].