THE COMMUNIST TRIUMPH OF PEARL HARBOR 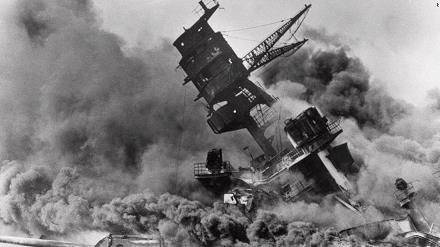 Tomorrow, December 7, 2018, is the 77th anniversary of the “Day of Infamy” as President Franklin Roosevelt condemned it, Imperial Japan’s attack on Pearl Harbor.

December 7, 1941 should rightly by condemned by history as one of the most infamous in the annals of mankind – but not primarily because of the Japanese.

Rather, it was one of the greatest acts of treason ever committed by citizens of a country against their fellow countrymen, resulting in hundreds of thousands of their deaths.  That would be American Communists precipitating the US entering World War II in order to save the Soviet Union.

Here’s who they are and how they did it.

To start at the beginning, George Washington’s Farewell Address of 1796 – the definitive statement of American patriotism – provides the basis for what has since been called American “isolationism”:

“The great rule of conduct for us in regard to foreign nations is in extending our commercial relations, to have with them as little political connection as possible. So far as we have already formed engagements, let them be fulfilled with perfect good faith. Here let us stop. Europe has a set of primary interests which to us have none; or a very remote relation. Hence she must be engaged in frequent controversies, the causes of which are essentially foreign to our concerns. Hence, therefore, it must be unwise in us to implicate ourselves by artificial ties in the ordinary vicissitudes of her politics, or the ordinary combinations and collisions of her friendships or enmities.”

At the opposite end of the presidential spectrum from the Father of Our Country was America’s First Fascist President, Woodrow Wilson, who engineered America’s entering World War I, demonizing and jailing as traitors anyone opposed.

The loss of over 100,000 American war dead in an impossibly stupid and bloody war reignited isolationist sentiments, which the Great Depression inflamed even further, given the war drums sounding in Europe and Asia in the 1930s.

In 1931, Imperial Japan militarily seized and colonized all of Northeast China or Manchuria.  In 1932, Hitler’s Nazis were elected to the German parliament (the Reichstag); by 1934 Hitler had transformed Germany into a Nazi dictatorship demanding “living space” (Lebensraum) for Germans in Eastern Europe.  In 1935, Italy’s Fascist Dictator Benito Mussolini militarily invaded and seized Ethiopia.

American isolationist sentiment secured that our government not be involved.  Such fervor was particularly strong among the Left, for after all, Hitler was a declared Socialist who hated capitalism.  What “Nazi” means is the abbreviation for how National Socialism is pronounced in German (not-see-oh-nahl sot-zee-ah-lees-ta-shey).

This became glaringly apparent when Hitler and Stalin signed a peace pact of non-aggression between them in August 1939, known as the Molotov-Ribbentrop Pact.

The American Left of the 1930s was more rabidly pro-Socialist, pro-Communist, and more traitorously anti-American than even today.  It was, in fact, straightforward Stalinist, with many of its members allies and spies for Stalin’s Soviet Union.  The Roosevelt Administration was riddled with them.

Thus, when Hitler started World War II by invading western Poland on September 1, 1939 – nine days after signing his pact with Stalin on August 23 – prompting England and France to declare war, the demand of the Left we not get involved was obdurate.  It became more so when, on September 17, Stalin’s Red Army invaded eastern Poland, carving up Poland between the Nazis and the Soviet Communists.

In other words, the entire American Left was completely on the side of Stalin and Hitler – and couldn’t care less about how many Jews Hitler holocausted, anymore than they cared how many Ukrainians Stalin genocided (the Holomodor).

Until, that is, June of 1941, when Hitler broke his pact with Stalin and attacked the Soviet Union with the largest invasion force in the history of warfare – four million soldiers – along a 1,800 mile front:  Operation Barbarossa.

Instantly, the entire American Left turned on a dime, becoming pro-war against Hitler.  Meanwhile in Moscow, Stalin was in complete shock over Hitler’s betrayal – and having a nervous breakdown over the Japanese.

Japan had joined England against Germany in World War I, was a signatory of the Treaty of Versailles which stole every German colony – and thus got all Germany’s possessions in the Pacific: the Marshalls, Carolines, Marianas, and Palau Islands.

But in 1936, Hitler reached out to Japan in support of its occupation of Chinese Manchuria and declared – be ready for it – the Japanese people to be “Honorary Aryans.” Relations improved, with Japan formally allied with Nazi Germany and Fascist Italy as one of the three Axis Powers in September 1940.

This did not bother Stalin as it meant Japan was part of his pact with Hitler.  With the Barbarossa invasion, his nervous breakdown was over the clear threat of Japan invading Siberia right across the border with Manchuria.

Stalin had a KGB (then the NKVD) agent in Tokyo, Richard Sorge, posing as a Nazi correspondent with a German newspaper.  From Sorge, Stalin learned there was an intense debate in the Japanese military, with the Army wanting to go north from Manchukuo (Japan-occupied Chinese Manchuria) invading Soviet Siberia right across the border, and the Navy wanting to go south for the oil in the Dutch East Indies.

The last thing Stalin wanted was Japan going north.  Sorge’s orders were to work with two Japanese Communists, Hotsumi Ozaki and Kinkazu Saionji, to use their influential relations with the Imperial Cabinet arguing for the Navy.

And now we come to the American traitors.

Stalin then used his agents in Washington, primarily Harry Dexter White at Treasury and Lauchlin Currie at the White House as FDR’s primary economic adviser, to insist on freezing Japanese assets in the US and place an oil embargo on Japan.  This FDR did on July 26, 1941, little more than one month after Hitler’s invasion.

Stalin thought this would strengthen the Japan Navy’s argument to go south.  Yet it ended up giving Japan’s Army to go north the upper hand.

By invading the Soviet Union from the east, the Army generals argued, and its German ally invading from the west, the USSR would be caught in a pincer movement against which it could not defend.  The German-Japan Axis would seize, conquer and divide up the entire USSR with its incalculable natural resources.

Realizing this, Stalin had the NKVD launch what it called “Operation Snow” – named after Harry Dexter White – by dispatching agent Vitaliy Pavlov to Washington who met with White at the Old Ebbitt Grill across from Treasury, giving him his marching orders to do everything possible to prevent Japan from invading the USSR, and sabotage US-Japan relations.

Humiliated, Konoye resigned in October, 1941, to be succeeded by warmonger Hideki Tojo.  Sorge-Ozaki stoked resultant Japanese enragement with every asset they had to get Tojo’s ordering the Japanese military to attack the US at Pearl Harbor instead of the Soviet Far East.

They succeeded.  The rest is tragedy on an unimaginable scale.

Japan’s invasion of Soviet Siberia instead would have given Stalin another war front he couldn’t withstand, fighting Germany at the same time.  Germany and Japan would have terminated the existence of the Soviet Union and of Stalin himself.

Hitler would have been so occupied conquering and dividing up the USSR, his ability to hold on to Western Europe would weaken – providing opportunities for its liberation with US help.

Yes, these predications are “What If?” history that’s all speculation.  Yet everything else above is what-actually-happened history.

Pearl Harbor was Communist Triumph.  The Soviet Union won World War II.  We had to fight a Korean War, then a Cold War for decades to finally liberate Eastern Europe and put the USSR out of its misery.  All unnecessary if not for traitors like Harry Dexter White.

Sobering history to reflect upon on December 7th.

Note:  The two books to read are: