The proof is in this picture, published by the official government news agency of Communist China, Xinhua, yesterday, March 28 – and in the article accompanying it:  “Xi Jinping, Kim Jong-Un Hold Talks in Beijing.”

You’re welcome to wade through it with all the Orwellian Commie-speak, but here’s the money quote:

Kim said: “The DPRK is willing to have dialogue with the United States and hold a summit of the two countries. The issue of denuclearization of the Korean Peninsula can be resolved, if South Korea and the United States respond to our efforts with goodwill, create an atmosphere of peace and stability while taking progressive and synchronous measures for the realization of peace.”

Is there any sentient being who can’t see that this is the doing solely and completely of POTUS-VSG Trump?  Okay, libtards driven wacko with Trump Hatred are excluded from being sentient.

Little more than a year ago (4/21/17), TTP told you, “How Donald Trump And Xi Jinping Can Earn The Nobel Peace Prize Solving North Korea.”  Well, here we are.

Five months later, the HFR of 9/29/17 followed this up with a section on Suicide by Trump:

“‘Suicide by Trump.’  It’s not just putting our domestic enemies on suicide watch, but our international ones as well.  Or get one enemy to knock off another.  This headline from yesterday (9/28):  Beijing Orders North Korean Businesses in China to Shut Down.

The Chicoms are coming to grips with the fact that Trump really will get rid of Rocket Man if they don’t.  Ereyesterday, Jack Kelly told of his suspicion that the two supposed ‘earthquakes’ that might trigger the collapse of the Norks’ Pungyye-ri nuclear site on Saturday (9/23) could have been the ‘secret kinetic option’ SecDef Mattis alluded to a few days before (9/19).

Kelly thinks that would be the “Rod of God” Kinetic Energy Projectile (KEP) – a ‘weaponized meteor strike.’

It is with my distinct satisfaction that TTPers were apprised of this weaponry 15 years ago in “Playing Poker with Korea” (December 2002).

In the section ‘Spearing Yongbyon’ (the Nork nuclear reactor), it describes how to destroy it ‘quietly, safely, stealthily and mysteriously’:

‘With a spear.  A steel rod forty feet long and four inches in diameter, fin-stabilized, with a needle-sharp tungsten-carbide tip, equipped with a small JDAM guidance package including a GPS.  It is non-explosive;  there is no warhead.  You’ve heard of smart bombs.  This is a smart spear.

You take a half-dozen of these Smart Spears up in a high-altitude bomber, like a B2 or B52. and drop them over Yongbyon at 50 or 60,000 feet.  The Smart Spears have such a big sectional density that it will be like a vacuum drop — with no wind resistance, they will be going faster than the speed of sound when they hit their target.

Going so fast and with almost no radar signature, the GPS-guided Smart Spears will punch through the Yongbyon reactor and keep right on going, burying themselves in the earth several hundred feet deep.  The North Koreans won’t know what happened, and all there will be is some holes in the ground — plus a melted-down reactor.’

Now they’re solid tungsten spears dropped from space hitting Pungyye-ri at a meteor speed of Mach 35.  Goodbye Pungyye-ri and the Norks don’t know what the hell happened.  The Chicoms have an inkling.  They’d better enact their plans quickly to have Rocket Man suffer a tragic event, replacing him with their stooge who’d denuclearize Norkland – before a Rod of God comes down on Kim’s head.”

That was followed last September in A Providential President with:

“Trump is telling the Chicoms:  it’s your call, have Kim suffer a tragic natural death and put in your guy to denuclearize the place, or I’m going to squeeze your economy’s gao wan so tight they’ll explode.”

Chief Chicom Xi got the message and told Kim it’s his call – to which Kim responded, “Hey, no problem, I’m your guy to denuclearize!”

Thus we get the story in Xinhua and this Trump triple tweet yesterday (3/28): 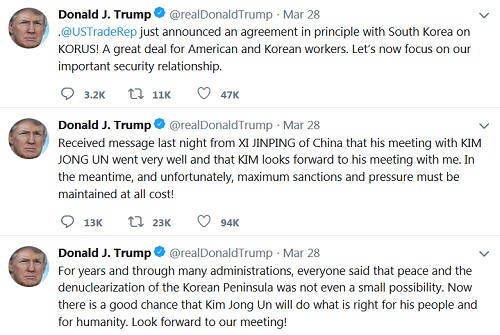 Quite frankly, the strategic genius of this is simply breathtaking – it leaves you awestruck.

In one fell swoop, POTUS-VSG gets the South Koreans on board with a new Korea-US Free Trade Agreement (KORUS) and sweetens the pot with new security guarantees – while getting the Chicoms to scare the daylights out of the Crazy Fat Kid to be no threat to us.

Of course, POTUS-VSG sweetens Kim’s pot by telling him he’ll be awarded the Nobel Peace Prize along with Xi and himself.

The three of them will stand together at the Nobel Podium of the Oslo City Hall to the applause of the world this coming December 10. No longer a World Pariah, Kim will be a World Hero!  You don’t get more world-class ego-stroking than that.

Our POTUS-VSG has taken Don Corleone’s “an offer he can’t refuse” to an entirely new level of carrot-and-stick brilliance.

Oh, yes – announcement of the 2018 Nobel Peace Prize by the Norwegian Nobel Committee (often awarded to multiple individuals such as in 2011) will be in early October – just a month away from the November 6 mid-term elections.

Let’s see the Dems try to retake the House & Senate with that… combined with a platform of hate, divisiveness, more taxes and illegal aliens over American citizens.

Yes, there are plethoras of possible Bardian slips ‘twixt cup-and-lips of the Trump-Kim Summit and Nobel October.

Hordes of caveats regarding verifiable inspections.  Don’t for a New York second dismiss worry that the Dems, the Deep State, and Waste Stream Media, fully demented with Trump Hatred as they are, will do their best to sabotage everything.

Yes, many of them would actually prefer a Nork Nuclear Threat to the greater nightmare of Trump standing on that Oslo stage with Xi and Kim.

So for now, let us simply stand in awe of what this one single man is trying to achieve for America.  We may truly be witnessing a Providential Presidency.