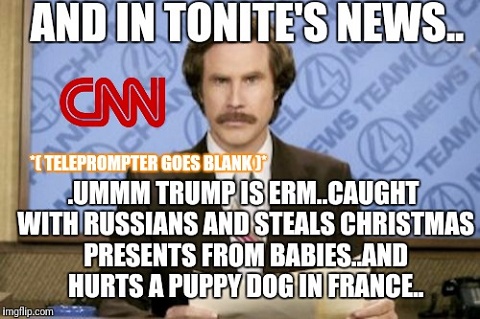 Having thrown in its lot with #TheResistance, the media now faces its inevitable, if not actually imminent demise.

Jobs in the newspaper industry continue to disappear, as physical publishing becomes an increasingly unprofitable occupation and advertisers bail for greener pastures.

On television, ratings for the cellar-dwelling CNN—once the premier brand in the cable-news racket—are abysmal. Yet the network stubbornly persists with an outmoded formula designed to keep its dwindling audience in a state of perpetual dudgeon, with zero appeal to anyone not already converted to its Manichean worldview.

As in the old Monty Python sketch, the media’s become a late parrot, pining not for the fjords but for the days when the public took it seriously as a relatively disinterested conveyor of information instead of a shadow Democrat Party government-in-exile, tubthumping for its ideological positions without a trace of embarrassment.

Amateurs vs. Professionals
The reasons for the media’s collapse include the rise of the internet and its instantaneous delivery system, the evaporation not only of its advertising revenue base, but of many of its former avenues of employment as well, including (from the newspaper days) linotype operators, printers, mailers, truck drivers, delivery boys, etc.

The democratization of publishing also has led to the withering of reporting staffs—the skills once prized and rewarded (news judgment, reporting, and writing ability)—matter increasingly less when, in a classic case of Gresham’s Law, the amateur product is outwardly indistinguishable from that of the professional, so why pay for it when you can have it for free?

Now the stench of rank amateurism has come to what’s left of the profession, and nowhere in journalism is that more visible than in the White House press corps.

Once upon a time, a gig in the Washington bureau was the ne plus ultra of the reporting vocation, inhabited by middle-aged wise men, who spoke soberly and dressed the part, knowing that the brass ring of Dean of the Washington Press Corps could be theirs someday, if not a promotion to the op-ed pages as a professional pundit with the ear of the president–Walter Lippmann, say, or the Alsop brothers.

Today, a collection of small children, the legacy sons of other network personalities, and supermodels graces the sets and standups at the news networks, chirping away in mouthfuls of clichés that would make the deceased Norwegian Blue parrot in the Pythons’ skit turn, well, blue with envy in its prime.

The old journalistic ladder looked something like this: a year or so on the police beat in Dubuque, followed by a stint covering the local county and perhaps federal courts for a newspaper in Portland, and then, if the reporter was able enough, a job on one of the big-city papers in New York, Chicago, or Los Angeles.

Not every piece had to have a political angle; not every lede needed to include a slighting reference to the President of the United States; not every opening graf needed to mischaracterize or refute the Republican/conservative position on any given topic.

In fact, attitudinizing was strictly forbidden: it was talent that mattered, not the correct opinions.  Those days are gone with the wind.

Media Bias in Its Purest Form
Now the White House beat has become an entry-level reporting job, in the course of which the callowest of youths, or the most airheaded among the former beauty queens, can sass the objects of their coverage, mock them, call them liars, and generally act out in public. (Yes, Jim Acosta, we’re talking about you.)

Here’s a very small but telling and typical example of everything that’s wrong with journalism today, by Catherine Lucey and Zeke Miller of the Associated Press (7/31, emphasis mine):

“Embattled White House Chief of Staff John Kelly has told senior aides that President Donald Trump asked him to stay in his role through 2020.

Kelly told staffers that he had agreed to stay on, five White House officials said Tuesday. The public show of confidence in Kelly, even if later reversed, appeared aimed at tamping down speculation about staff turnover, as well as projecting calm as the president gears up for his re-election campaign.

The officials who were not authorized to speak publicly about private conversations (sic).”

There you have it—media bias in its purest, most deceptive form.

“Embattled”? Only in the media’s imagination, as Kelly is practically invisible. Hearsay reporting attributed to five anonymous and perhaps imaginary “White House officials.” Weasel words like “appeared” in the midst of “speculation.” An ascribed political motive, “projecting calm.”

Extra bonus: a final sentence that makes no grammatical sense, probably thanks to sloppy editing either at the AP or the Chicago Sun-Times, which picked up the story.

This constant irruption of mindless prattle might be amusing were it not such a terrible commentary on the state of “journalism” today.

And when the tables are turned, and the public gives the reporters a taste of their own crude hostility, the media freaks out and, of course, blames Trump, falsely claiming that a little civilian pushback against a group of people who openly despise them is somehow a direct threat to the First Amendment and might even get some reporters killed.

Watch and enjoy Acosta getting his at the Trump Tampa Rally on Tuesday (7/31) – note the audience is having fun:

The fact that, as far as I know, there has never been a single pampered White House correspondent killed in the line of duty, not only never seems to pierce the veil of their heroic fantasies, but it also dishonors the many great reporters who actually did die for their profession, among them Mark Kellogg (who died at the Little Bighorn with Custer) and Ernie Pyle, killed at Okinawa in 1945.

Serving the American Public—Except for the “Garbage People”
Such is, apparently, the dangerous life at the gates of the White House, where a dark usurper has seized control of the nation, with the insidious help of the Russians, and now plots the further erosion of civil liberties and the conquest of the brown and black countries of the world, with only the weekend warriors of the Fourth Estate standing between him and Our Democracy.

They are the ones who Speak Truth to Power, bravely confronting the most powerful man in the world and his henchmen, putting their lives and livelihoods on the line as they serve and service the American people, half of whom are deplorably ungrateful “garbage people” who should die miserably.

Preening popinjays by day and fearful children by night, dreading to see what’s lurking under the bed.

But knowing for sure that something’s there, the ladies and gentlemen of the press selflessly go about their constitutionally appointed rounds, increasingly aware that the public loathes them for their partisanship and dishonesty, and yet wearing it as a badge of honor and proof of virtue even as they beg for protection from the nightmare they’ve created.

As Monty Python said of the dead parrot, lovely plumage, though.

Michael Walsh is a journalist, author, and screenwriter. He was for 16 years the music critic of Time Magazine. His latest book, “The Fiery Angel,” is scheduled to appear later this year.