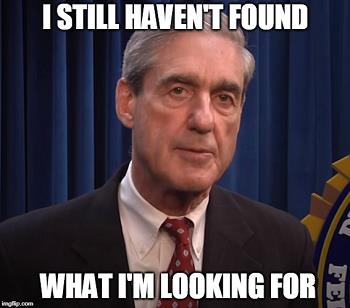 Like a long-running TV soap opera, the Boy Scout Show, starring the lugubrious Robert Mueller as the big bully himself, is back.

Off the air for some months as the people who brought you “Senator Spartacus Battles Brett Kavanaugh” and “Midterm Mayhem,” along with a special workshop on “How Democrats Can Manufacture Ballots at the Last Moment to Steal an Election,” the Big Bully Boy Scout is once again entertaining thousands across the fruited plain.

The producers of this interminable entertainment have learned a thing or two from other soap operas. For one thing, some of your favorite characters who had seemed to be written out of the script have made miraculous recoveries and, word has it, are signed for important parts in the entire season that just got underway.

Paul Manafort, for example, whom script writers seemed to have killed off last season, is back with gusto. The Bully Boy Scout and his stable of potty prosecutors (potty prosecutor No. 1: Anthony Weismann, who rumor has it is looking for another major U.S. company to destroy this season, the accounting firm of Arthur Andersen having whetted his appetite) are whining loudly about old Paul.

The season opener brought Manafort back with a bang as headlines blared that he broke his plea agreement with Big Bully Mueller. Part of the excitement revolved around the fact that no one who was not part of the inner circle had any idea what the sharp tooth emissaries of state power were talking about.

The charge was that Manafort lied “to the Federal Bureau of Investigation and the Special Counsel’s Office on a variety of subject matters, which constitute breaches of the agreement.”

But “a variety of subject matters” covers a multitude of possibilities, which of course is exactly the point of this Kafkaesque charade in which dozens of people are swept up in the insatiable maw of prosecutorial frenzy.

Remember George Papadopoulos? He apparently told prosecutors that his favorite flavor of ice cream was chocolate when they had phone and social media record demonstrating that it was strawberry. So he is just about to start a 14-day sentence in jail for the outrage.

Television audiences across the country wonder what will happen to General Michael Flynn, bête noir of the deep state, who was briefly Donald Trump’s national security advisor until the Bully Boy Scout sprang a perjury trap on him. His sentencing date is pending.

On Tuesday night (11/27), the Drudge Report had huge red headlines about Jerome Corsi, the Info Warrior who was granted limited immunity by the special counsel in exchange for information about Roger Stone, who is also making a comeback.

One thing that several observers have noted is that only one tranche of characters is getting the limelight. Roger Stone suggested as much when he observed, in one of the best lines of the entire series, “John Podesta makes Paul Manafort look like St. Thomas Aquinas. Where is the New York Times?”

Good question. Inquiring minds want to know. Why haven’t the New York Times and the rest of the Democratic party media apparatus—to say nothing of the office of the special counsel—taken an interest in the Podesta brothers, John and Tony? The latter  worked with Paul Manafort in the Ukraine, the former was the head of Hillary Clinton’s presidential campaign. Interesting, no?

And if we’re interested in people who lied to the FBI or Congress or Mueller’s office, why aren’t John Brennan and James Clapper and James Comey on the set, prepping for their comebacks?

What about Susan Rice and Loretta Lynch and Andrew McCabe and Glenn Simpson? What about Hillary “What’s an email server?” Clinton herself?

As everyone really knows, the entire Mueller sideshow has nothing to with any alleged collusion between the Trump campaign and the Russians for the simple reason that there was no collusion.

It is a gigantic blind, a smoke screen, concocted by people like John “I voted for a Communist for President and still became head of the CIA” Brennan and the Obama Injustice Department.

In a way, the despicable Robert Mueller is just a patsy in this surreal carnival. He has been empowered, at great public expense ($40 million and counting), to Get Trump. That’s the unspoken brief.

Along the way, of course, he gobbles up the lives of a wide circle of the president’s associates in order to make such association toxic. His lack of curiosity, and lack of ferocity, about Glenn Simpson and his X-rated, fact-free dossier, the fairy tale that got the whole “Russian collusion” meme started in the first place, speaks volumes.

So grab the popcorn and get ready for Season Two of the Big Bully Boy Scout Show. There is sure to be a lot more theater and probably some memorable performances.

What it has to do with the pursuit of justice is difficult to discern. But justice was never the point, nor was the truth about what happened in the 2016 election.

The point is to stage the great anti-Donald Trump burlesque, partly to correct the mistake of the 2016 election which somehow ushered him into the White House, partly to cover up the truth about the Clinton campaign’s and the Obama Administration’s involvement in the effort to rig and election and then, when that failed, to destroy the Trump presidency.

That is the biggest political scandal in American history, but it will never be aired on CNN or reported in the pages of the New York Times.

Roger Kimball is Editor and Publisher of The New Criterion and President and Publisher of Encounter Books.  His latest book is The Fortunes of Permanence: Culture and Anarchy in an Age of Amnesia.