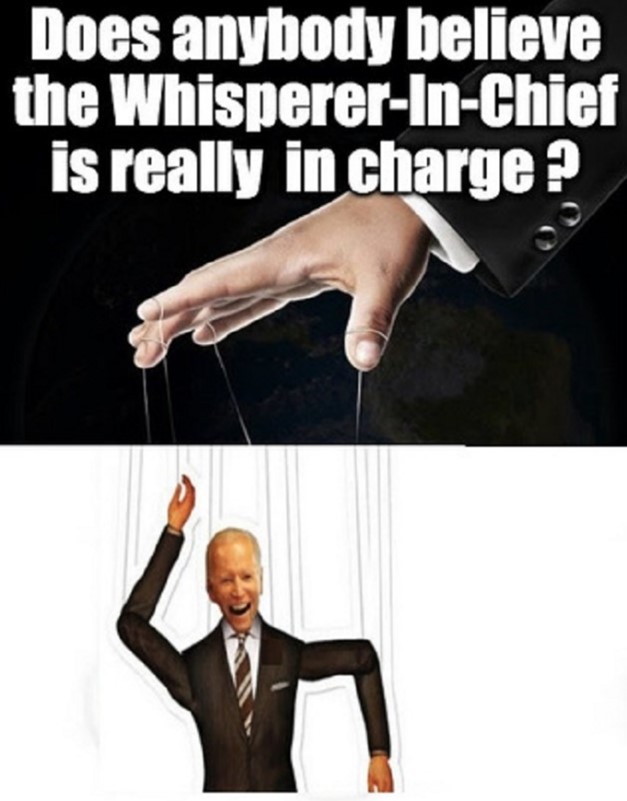 Last week, word emerged from the White House that Biden’s own staff can’t stand to listen to him. It’s not that they don’t agree with his policies (heck—they probably crafted them). Instead, it’s that he’s such a verbal loose cannon that they shudder when they hear him speak off the cuff.

Yesterday (9/13), the White House staffers paying attention to his answers about western wildfires were so worried about where his mouth was taking him that they pulled the plug on him in mid-sentence.

Last Tuesday (9/07) a Politico story explained that Biden’s staff constantly worries about Mr. Big Mouth in the White House. It appears that everyone in Biden’s orbit is begging him to keep his mouth shut and be the good little puppet they need.

The same Politico story noted that “[Biden’s] verbal miscues have been causing headaches for him and his team. Biden has delivered several self-inflicted wounds during freewheeling Q&A sessions that required immediate clean-up.”

That problem may explain why, on Monday, a panicked White House cut off Biden’s feed in mid-sentence.  As Fox reported:

“The White House abruptly cut the feed of President Biden‘s briefing on wildfires with federal and state officials.

During Monday’s visit to Boise, Idaho, Biden received a briefing about the ongoing wildfires that have plagued several states out west.

While Biden spoke for much of the briefing, at one point he said he wanted to hear more from George Geissler of the National Association of State Foresters.

‘Can I ask you a question?’ Biden asked.

‘One of the things that I’ve been working on with some others is — Biden said before being cut off mid-sentence.

BIDEN: “Can I ask you a question?”

Nor is this censorship an anomaly. The Fox News report quoted above points out that, in August, the White House cut Biden’s audio feed when a reporter asked him about the military’s deadline to withdraw from Afghanistan. The White House did the same in March when Biden volunteered to take questions from Democrat politicians.

Puppet politicians are all well and good when they take their orders and do as they’re told. They become a problem either when they try to seize real power or when they become so verbally incontinent that they can no longer be trusted to stick to the script and speak only when their strings are pulled.

In January, I predicted that Biden would be out by June. I was obviously wrong. I’m not going to risk picking a specific date by which Biden retires from office. However, I do not see how his staff can keep propping him up if they’re reduced to silencing him whenever he gets a head of steam and starts moving his lips on his own.