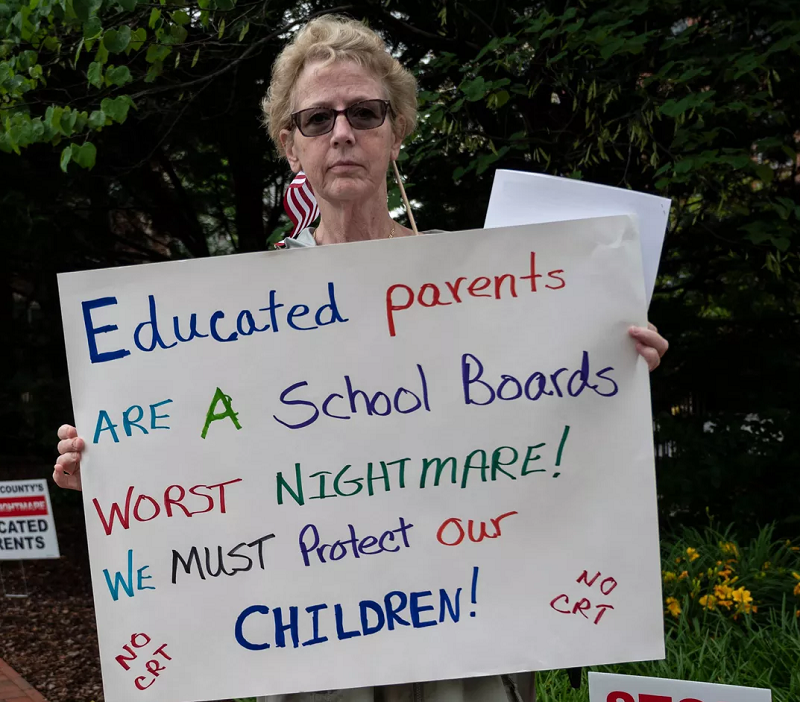 Even as President Biden shrugged his shoulders over progressives’ harassment and intimidation of a sitting United States senator of his own party — a crime under Arizona law — Biden’s Justice Department was running roughshod over the First Amendment, threatening to investigate and prosecute parents for protesting against school boards and teachers who insist on indoctrinating children with the cultural Marxism beloved by Democrats.

On Monday (10/04), Attorney General Merrick Garland issued a memorandum in which he wailed about the “disturbing spike in harassment, intimidation, and threats of violence against school administrators, board members, teachers, and staff.”

Clearing his throat with an empty nod to the inconvenient fact that the Constitution protects “spirited debate,” Garland incorrectly — indeed, outrageously for someone of his experience as a Justice Department official and federal appellate judge — claimed that free-speech principles yield not only to “threats of violence” but also to “efforts to intimidate individuals based on their views” (at least, evidently, individuals not named Sinema or Manchin).

Garland knows this is dangerous nonsense. I personally know that he knows it.

He was a high-ranking official in the Clinton Justice Department, which gave me a very hard time — though it ultimately relented — when I proposed charging a notorious terrorist with soliciting acts of violence and seditious conspiracy.

We had elaborate evidence, much of it in the form of recorded statements, showing that Sheikh Omar Abdel Rahman (the “Blind Sheikh”) believed himself to be in a forcible war against the United States, that his followers had carried out and plotted terrorist attacks, and that he had personally called for both bombings of American military installations and the murder of Egypt’s then-president.

Yet, with the Clinton administration under pressure from left-wing and Islamist groups aligned with the Democrat Party, I was darkly cautioned about the inviolable carapace of free expression and the imperative to avoid “chilling” speech by conflating criminal incitement with constitutionally protected rhetoric that expressed hatred for America — even rhetoric that bitterly attacked American officials and insisted that our governing system should be supplanted.

Garland well knows, as he and Clinton officials stressed to me nearly 30 years ago, that in the incitement context, the First Amendment protects speech unless it unambiguously calls for the use of force that the speaker clearly intends, under circumstances in which the likelihood of violence is real and imminent. Even actual “threats of violence” are not actionable unless they meet this high threshold.

A fortiori, the First Amendment fully protects speech evincing “efforts to intimidate individuals based on their views.” As long as such speech does not constitute a clear and imminent threat to do violence if the individual acts on his or her views, there is no incitement — and hence no law-enforcement interest to vindicate.

And in particular, there is no federal law-enforcement interest to vindicate. Under the congressional statute criminalizing incitement (section 373 of the penal law, “Solicitation to commit a crime of violence”), even an actual threat of violence is not actionable unless the speaker has called for “physical force against property or against the person of another in violation of the laws of the United States” (emphasis added).

There is no general federal police power. We were able to convict the Blind Sheikh of incitement because his threats implicated actual federal interests — American military personnel and property, and a foreign-government official whose protection was, by law, a federal responsibility.

By contrast, if I threaten to punch my local school-board president in the nose, there is a possibility — depending on how serious and imminent the threat appears — that I have violated state law, but there is no possibility whatsoever that the matter is a concern of the Justice Department. Even if I follow through on the threat, I have still not violated the laws of the United States.

The Biden Justice Department is just a continuation of the Obama Justice Department, which was the most politicized in American history. The Obama/Biden administration modus operandi was/is to make the process the penalty — in this case, the investigative process, coupled with the threat of Justice Department criminal or civil prosecution, no matter how invalid.

That is what Obama/Biden officials notoriously did in the IRS scandal, intimidating conservative organizations by investigating them under the threat that they would lose their tax-exempt status.

In insidious irony, the administration did exactly what such constitutional provisions as the First Amendment are supposed to forbid — it took government action that effectively thwarted constitutionally protected political activity (such as organizing political opposition to Obama-administration policies).

The Obama Justice Department did the same thing after the racially charged death of Trayvon Martin.

Attorney General Eric Holder had to know that there was no conceivable federal civil-rights case against George Zimmerman. But he threatened to bring one anyway, calculating that this would pressure local Florida prosecutors to indict Zimmerman for murder — which they reluctantly did, only to have the case blow up in their faces when a jury swiftly acquitted Zimmerman.

The same cynical “the process is the penalty” strategy was behind the Obama administration’s infamous “Dear Colleague” letters, which used the threat of Justice Department enforcement action to compel adherence to progressive pieties that gutted due process on college campuses, invoked racism as a rationalization to dictate school-discipline practices nationwide, and pressured schools to accept the notion that gender is mutable rather than a fixed biological reality.

Extortion was similarly behind the Obama Justice Department’s crusade to force state and local police departments to adopt progressive policing standards (i.e., to abandon the policing standards that had brought about a generation of record-low crime rates).

Perhaps the clearest analog to the extortionate memo Garland released yesterday was the Obama administration’s much-overlooked effort to erode the First Amendment by signing on to a United Nations resolution purporting to outlaw speech expressing “advocacy of religious hatred” that constituted “incitement to . . . hostility” against religion.

The objective, of course, was to outlaw analysis of the undeniable nexus between Muslim scripture — as interpreted in sharia supremacism, a fundamentalist and long-established construction of Islam — and acts of terrorism committed by young jihadists.

Naturally, when it was pointed out that this U.N. resolution was blatantly unconstitutional under the First Amendment, Obama’s then-secretary of state, Hillary Clinton, egregiously countered that the government was prepared “to use some old-fashioned techniques of peer pressure and shaming, so that people don’t feel that they have the support to do what we abhor.”

That is what progressives do when they’re in power: They use demagogic rhetoric to defame constitutionally protected dissent, and threaten government retaliation — with its portents of investigative harassment and ruinous legal costs — to extort compliance.

Even if one were convinced that Judge Garland, a progressive but reputedly not a radical, was the best one could hope for in a Biden-appointed attorney general, he is proving to be no better than, say, a Keith Ellison or Larry Krasner would have been.

There are good reasons for this. No matter how moderate and how big a Justice Department institutionalist Garland may be, it would take an AG with strong personality and the backing of a strong president to hold the crazies at bay. And we have neither.

More to the point (the point being the faux-moderate weakling in the Oval Office), Biden is not going to be able to deliver to progressives the FDR-style transformative legislative victories they covet. Democrats’ congressional majorities are razor-thin, probably temporary, and consumed by infighting.

Biden is intimidated by the Bolshevik Left, which is why he could not even bring himself to defend Sinema. Since he cannot satisfy the radicals legislatively, he will have to do what it is in his power to do unilaterally.

That means unleashing the Justice Department to bludgeon the Left’s political opposition into submission with lawless threats of enforcement action.

Andrew C. McCarthy was Assistant United States Attorney for the Southern District of New York from 1986 to 2003.  Currently a senior fellow for The Foundation for Defense of Democracies and regular contributor for Fox News, his latest books are Ball of Collusion: The Plot to Rig an Election and Destroy a Presidency and American Ingrate: Ilhan Omar and the Progressive-Islamist Takeover of the Democratic Party.