THE BAY OF PIGS 60TH ANNIVERSARY 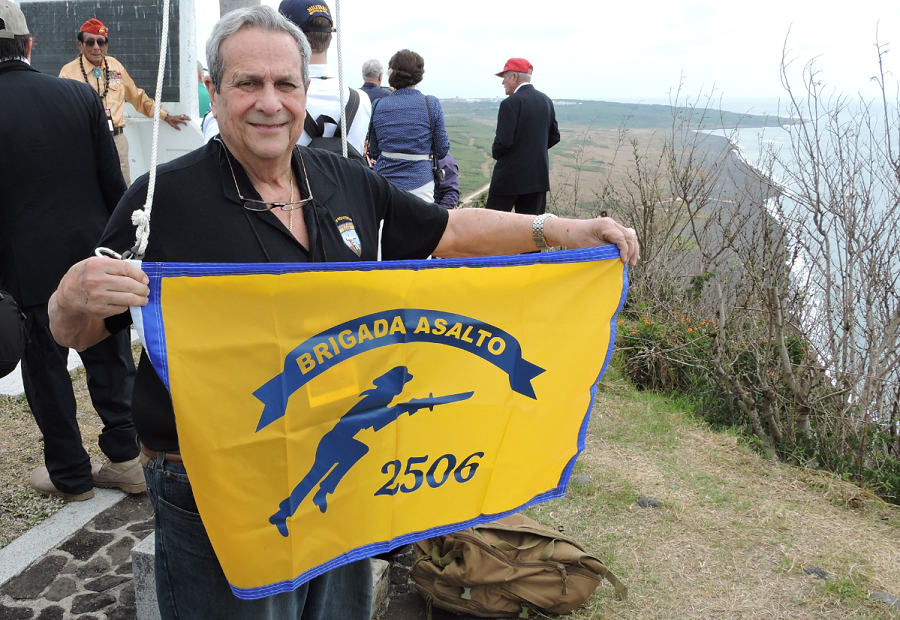 [Intro by Jack Wheeler.  This is my friend Felix Rodriguez, legendary Cuban-born CIA agent who was key to organizing the Bay of Pigs invasion to liberate Communist Cuba 60 years ago this week, April 17-20, 1961.  In 2015, I took Felix to Iwo Jima, where he hoisted the flag of the Brigade 2506 liberation force up the flagpole on Mount Suribachi (you can see the Marine’s 1945 black sand invasion beach below).

Felix’s most famous CIA exploit was capturing Che Guevara in the jungles of Bolivia in 1967.  Here he is with Che who had only an hour to live when the photo was taken.  The Bolivian military ordered him killed while Felix wanted him to live as Che was pleading to tell everything he knew about Castro. 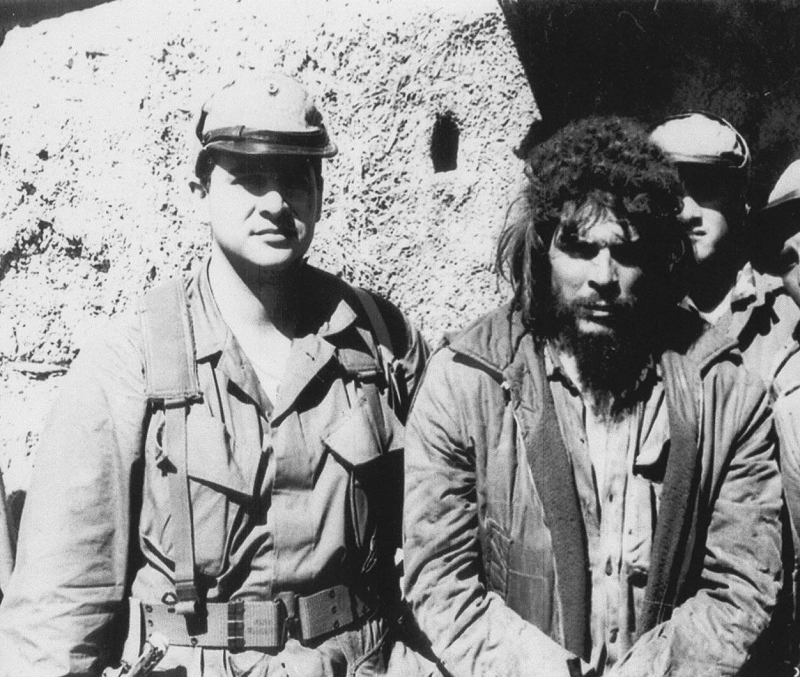 What follows is historian Humberto Fontova’s account of John Kennedy’s betrayal of the aborted attempt to bring freedom to Cuba.  Cuba could have been free and flourishing for the last 60 years had it not been for JFK’s cowardice.  Here is the story of magnificent heroism and spineless tragedy.]

“It was 60 years ago this week that an uncertain new president launched an ill-conceived military venture of astonishing naivety… 1,400 U.S.-trained Cuban exiles would land at the Bay of Pigs… It was an unmitigated disaster… Kennedy had learned the hard way not to blindly trust the advice of his decorated military and intelligence chiefs.” (Beltway media stalwart and former Democrat White House official Lawrence Hass writing in The Hill, April 12 2021.)

And yet again, rather than go through the trouble of concocting their own propaganda, communist Cuba’s KGB-founded and -mentored media simply transcribed the U.S. beltway media. Think I exaggerate?

“It was 60 years ago this week that an uncertain new president (John F. Kennedy, JFK) launched an ill-conceived military venture of astonishing naivety…. 1,400 U.S.-trained Cuban exiles would land at the Bay of Pigs… Lawrence J. Hass, a U.S. expert on international relations, acknowledged on Monday that Washington’s invasion of Cuba in Bay of Pigs was ‘an ill-conceived military venture and an unmitigated disaster’.” (Stalinist Cuba’s propaganda organ Prensa Latina, April 12 2021.)

“Much more valuable than rural recruits for our Cuban guerrilla force were American media recruits to export our propaganda.” (Ernesto “Che” Guevara, 1959.)

In fact, in complete refutation of the Media-Democrat-Castroite spin, the lack of naivete started with the invasion’s very begetter and main booster: Vice President Richard Nixon.

Here was the man who bucked the astonishing naivete (and treachery) of the Beltway establishment to see through and call out Alger Hiss.

Nixon was also among the first U.S. officials to buck the astonishing naivete (and treachery) of the Beltway establishment by calling out and urging the overthrow of the closet Stalinist and Soviet asset Fidel Castro—and at the very moment Castro was being lionized by the U.S. media, State Dept., and even many in the CIA.

In fact, the military venture was expertly-planned and was anything but naive. The astonishing blunders and naivete were entirely Camelot’s.

After it dropped in their lap with Nixon’s electoral defeat via JFK’s cheating, the New Frontiersmen insisted on sticking their manicured fingers in, and fumbling with, almost everything planned on the orders of the Supreme Commander of Operation Overlord.

“Help the Cubans to the utmost,” Eisenhower stressed to his successor while handing over the reins. “We cannot let Castro’s government go on.”

For starters, the original invasion plan by the CIA and its military partners (all WWII and Korea vets) picked the Cuban town of Trinidad as the landing site. This coastal town 100 miles east of the Bay of Pigs was originally chosen by the CIA and the military men because it was a hotbed of anti-Castro sentiment and offered good off-loading facilities.

Also, the nearby Escambray Mountains crawled with anti-communist guerrillas, who were giving the Castroites fits. These would join the invading force that also carried arms for them. Just as importantly, only two major roads led to Trinidad from the north, so any Castro troops moving in would have been sitting ducks for the freedom-fighter’s small air force.

Alas, landing in a populated area like Trinidad was deemed “too noisy” by the guilt-stricken New Frontiersmen. They had a fetish about hiding the U.S. role (this massive secret!). Any hint of such a role might discomfit the Latin American “street,” you see. The New Frontiersmen suffered a guilty conscience about such “Yankee bullying.”

And, mercy me, what would the U.N. say? The Best and the Brightest suffered a veritable fit of the vapors just thinking about it. So back to the drawing board for the planners.

They returned with a landing site at the Bay of Pigs, a desolate swamp. This was worse from a military standpoint but had a good chance of success – given total air superiority, given the complete obliteration of Castro’s air force. This was stressed by the military and CIA planners, just as it’s stressed here by me.

Don’t let Camelot’s Press Agency (the Beltway media and academia) feed you any malarkey about this all-important factor, please, amigos.

Idiotically (and tragically) 80 percent of the pre-invasion sorties by the freedom-fighter planes from Nicaragua — the essential component of the plan to knock out Castro’s air force on the ground as originally devised under the Eisenhower administration — was canceled at the last moment by JFK on the advice of his Best and Brightest.

The U.S. hand after the first air strike (that HUGE SECRET!) was showing, you see.

So, the flustered and guilt-stricken Knights of Camelot, while frantically fanning their blushing faces, nixed the next airstrikes literally in their tracks. Some of the freedom-fighter planes were already taxiing down the crude runways.

“WHAT?! Are they NUTS?!” bellowed Brigade Air Force chief Reid Doster when he learned that Kennedy had canceled most of the vital airstrikes to destroy Castro’s small air force before the invasion. “There goes the whole effing war!”

The canceled airstrikes made the Brigade 2506’s lumbering B-26s easy prey for Castro’s jets and fast Sea-Furies — and the troops, ships and supplies below them were even easier prey. It was a turkey shoot for the Castroites.

But the unequal battle raged furiously on the tiny beachhead. “Where are the planes?” kept crackling over U.S. Navy radios two days later. “Where is our ammo? Send planes or we can’t last!” Brigade Commander Jose San Roman kept pleading to the very U.S. fleet that escorted his men to the beachhead.

Crazed by hunger and thirst, his men had been shooting and reloading without sleep for three days. By then many suspected they’d been abandoned by the Knights of Camelot.

That’s when Castro’s Soviet Howitzers opened up, huge 122 mm ones, four batteries’ worth. They pounded 2,000 rounds into the freedom-fighters over a four-hour period. “It sounded like the end of the world,” one said later. “Rommel’s crack Afrika Corps broke and ran under a similar bombardment,” wrote Haynes Johnson in his book, The Bay of Pigs.

By that time the invaders were dazed, delirious with fatigue, thirst and hunger, too deafened by the bombardment to even hear orders. But these men (representing every race and social class in Cuba) were in no mood to emulate Rommel’s crack Afrika Corps by retreating. Instead, they were fortified by a resolve no conquering troops could ever call upon–the burning duty to free their nation.

The term “liberation” was no abstraction to these men. No navel-gazing about the merits of “regime change” for them. Sullen or hostile foreigners in sandals, beards, kiffeyehs, and strange robes wouldn’t be the ones meeting them. They’d be bashing open prison doors and bulldozing down barbed wire, all right – but their own fathers, uncles, cousins and even sisters, aunts, daughters would be the ones staggering out to suffocate them with teary hugs and sobs.

One of every 19 Cubans was a political prisoner that horrible year. Firing squads were murdering hundreds every week. Dozens of American citizens languished in Cuba’s prison cells too.

“If things get rough,” the heartsick CIA man Grayston Lynch radioed back, “we can come in and evacuate you.”

“We will NOT be evacuated!” San Roman roared back to his friend Lynch. “We came here to fight! We don’t want evacuation! We want more ammo! We want planes! This ends here!”

It seemed like Camelot’s criminal idiocy had finally relented when Pres. Kennedy allowed some Skyhawk jets to take-off from the Essex, which was just offshore of the beachhead. One of these pilots quickly spotted a long column of Castro tanks and infantry making for the freedom-fighters. The Soviet tanks and trucks were sitting ducks. “Aha!” he thought. “Now we’ll turn this thing around!” The pilot began his dive.

“This is CRAZY!” he bellowed back. “Those guys are getting the hell shot out of them down there! I can see it!” Turned out, JFK had allowed them to fly and look—but not to shoot!

Some of these battle-hardened Navy pilots (well before U.S. military personnel were required to be “woke”) admit to sobbing openly in their cockpits. They were still choked up when they landed on the Essex. Now they slammed their helmets on the deck and broke down completely.

“I wanted to resign from the Navy,” said Capt. Robert Crutchfield, the decorated naval officer who commanded the fleet off the beachhead. He’d had to relay Washington’s replies to those pilots.

A close-up glimpse of the heroism on that beachhead might have pushed those Essex pilots over the edge.

The freedom-fighters’ spent ammo inevitably forced a retreat. Castro’s jets and Sea Furies were roaming overhead at will and tens of thousands of his Soviet-led and armed troops and armor were closing in. The Castro planes now concentrated on strafing the helpless, ammo-less freedom-fighters.

“Can’t continue,” Lynch’s radio crackled — it was San Roman again. “Have nothing left to fight with… out of ammo… Russian tanks in view… destroying my equipment.”

“Tears flooded my eyes,” wrote Grayston Lynch. “For the first time in my 37 years I was ashamed of my country.”

When the smoke cleared and their ammo had been expended to the very last bullet, when a hundred of them lay dead and hundreds more wounded, after three days of relentless battle, barely 1,400 of them — without air support (from the U.S. carriers just offshore) and without a single supporting shot by naval artillery (from U.S. cruisers and destroyers poised just offshore) — had squared off against 21,000 Soviet-led Castro troops, his entire air force, and squadrons of Soviet tanks.

The Cuban freedom-fighters inflicted over 3,000 casualties on their Soviet-armed and -led enemies. This feat of arms still amazes professional military men.

“They fought magnificently and were not defeated,” stressed Marine Col. Jack Hawkins a multi-decorated WWII and Korea vet who helped train them. “They were abandoned on the beach without the supplies and support promised by their sponsor, the Government of the United States.”

Humberto Fontova is a Cuban-American author whose latest books are Exposing the Real Che Guevara: And the Useful Idiots Who Idolize Him and The Longest Romance: The Mainstream Media and Fidel Castro.