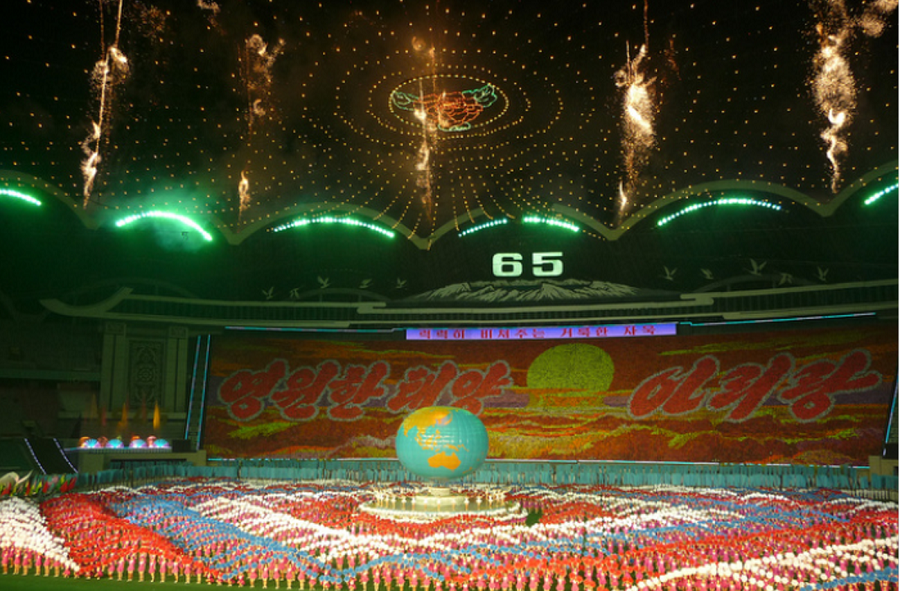 The spectacle takes place in the fall at the May Day Stadium in Pyongyang.  I attended in 2010 and 2012.  It has to be seen to be believed.  You’re looking at 10,000 dancers, acrobats and performers on the stadium floor.  The background screen of a rising sun and Korean letters is a “card stunt,” 30,000 students holding colored cards composing it.

The number “65” is for the 65th anniversary of the surrender of Imperial Japan in World War II (August 15, 1945 – I took this photo in 2010), their Liberation Day (our V-J Day).  The snowy mountain depicted below the 65 is Mount Paekdu, where all North Koreans are taught their country’s founder Kim Il-sung defeated the Japanese and won the war (he was actually at a Soviet army camp near Khabarovsk, Siberia at the time).

They are never taught a word about the events a few days prior to their Liberation Day (i.e. Hiroshima and Nagasaki), nor to whom the Japanese surrendered.  Hands down, NorkLand is the world’s most bizarre country. (Glimpses of Our Breathtaking World #88 Photo ©Jack Wheeler)