While chilling here in Sumatra (see Sumatra Sunrise) after writing an exposition of one entire ocean (the Indian:  see The French Ocean), I never thought I'd soon be writing about another, and one so far away.

Yet the Russians' stunt of planting their flag on the bottom of the Arctic Ocean at the North Pole is such a dangerous joke that I'm compelled to do so.  The joke is on the Russians, for there already is an American flag planted there.

Evidently, the six Ruskie explorers in their Mir mini-subs didn't look around very much when they reached the sea floor at 14,000 feet down.  If they had, they would have seen the stars and stripes – or at least what it's encased in.

It's quite a story of how that American flag got there.  And it provides quite an opportunity to create an Arctic Ocean Pie – one that the UN doesn't get a slice of.

It had never been done before.  The Otter is a tough plane, capable of landing on the rough icy surface of a frozen ocean with skis.  It's "STOL" – short take-off and landing – so it can get you on and off the ice quickly (once we landed and took off on an ice floe only 700 feet long).

The Otter's liability is that has no range – flying less than 600 miles or so before running out of fuel.  The Pole is a long ways away, even from Canada's northern most island, Ellesmere, as you can see from this map: 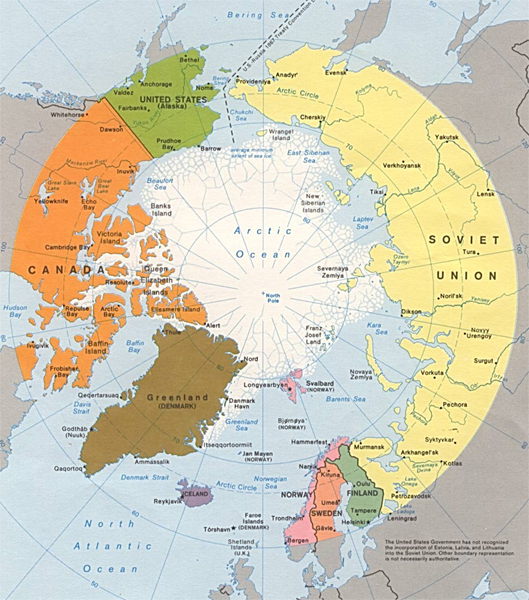 The colored region is within the circle of  66.33.39 north latitude, or the Arctic Circle (within which the sun shines for 24 hours on June 21, the summer solstice, and doesn't shine for 24 hours on December 21, the winter solstice.)

Only five countries border the Arctic Ocean:  Russia (yellow, marked Soviet Union on this old map, which is appropriate given current developments), Norway (pink, as it owns Spitzbergen or Svalbard), Denmark (brown, as it owns Greenland), Canada (orange), and the US (green, as it owns Alaska).

Ellesmere is the Canadian island nearest Greenland.  We decided to use a hut on Lake Hazen in northern Ellesmere as our base camp and main fuel cache.  Here's a NASA sat photo of Hazen: 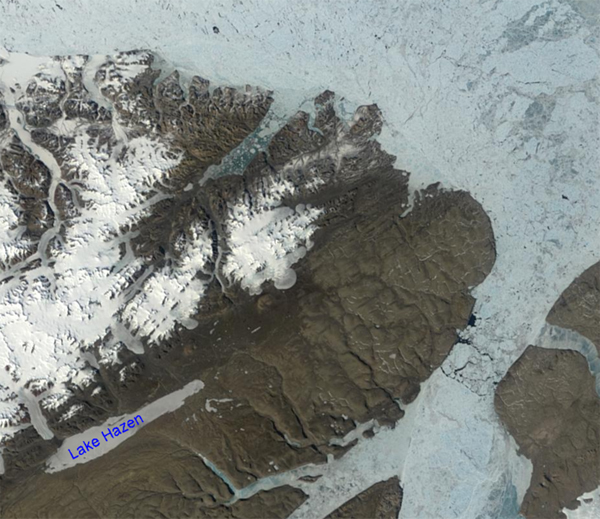 All that white around the top of Ellesmere is Arctic Ocean pack ice.

The Geographic North Pole is by definition at 90 degrees north latitude, at right angles to the Equator (0º).  There are 60 nautical miles (nm) to the degree (1 nm=1.15 statute miles).  With the Hazen camp at not quite at 82º, we were more than 8 degrees from the Pole, over 550 miles away.

This meant we had to place a fuel cache – several drums of av-gas – up on the ice of the Arctic Ocean around 86º with a radio beacon, plus carry seven more drums aboard the Otter.

The only safe time of the year to attempt this is in April, a few weeks after the spring equinox of March 21 for the sun to get high enough above the horizon so there's sufficient sunlight to see the shadows on the ice blocks – but before the sun starts creating ice crystal fogs and thinning the ice.

The plan worked.  In April, 1978, we made it to the Pole, setting down on the sea-ice at the very top of the world.  We celebrated with champagne and caviar, which had to be consumed quickly before it froze at 25º below zero.

I bailed out way above the tiny black specks of my clients on the vast white ocean and had the sky-dive of my life.  Just as I landed, one of the folks, Steve Drogin, snapped this picture: 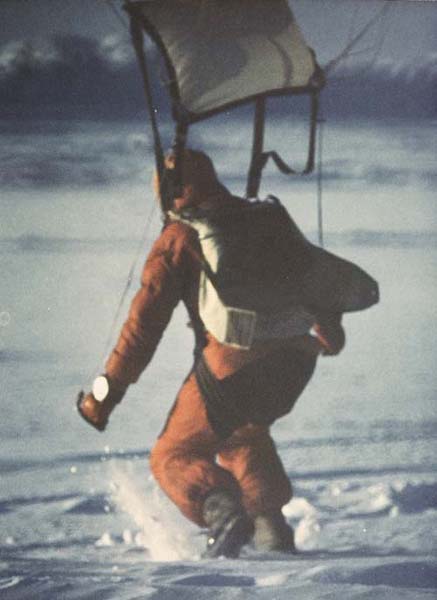 But the next year, 1982, I decided not to go the Pole, or run any expeditions at all.  I had become a hermit, hiding away in a remote part of Malibu in California, for the greatest tragedy of my life had occurred.

The love of my life, the woman I was to marry, born and raised in the French Alps as the daughter of a cheesemaker, the star of the Folies Bergere in Paris and Las Vegas, who had been with me on an expedition to a cannibal tribe in New Guinea, to the Pole, to the Alps retracing the route of Hannibal (with two elephants!), who was my life partner, Jacqueline Vial, had passed away in my arms from breast cancer.

All I could do was mourn.  So when a friend who was trying to get his own expedition business started, Mike Dunn, called and asked how he could run a Pole trip if I wasn't, I said okay and explained how to do it.

It didn't turn out so well.

Landing a plane on the sea-ice of the Arctic Ocean is tricky.  You need a very particular configuration of ice called an old frozen-over lead.  "Leads" (leeds) are shear lines in the pack ice, split by the ocean currents and forming rivers of open water.  These then freeze back up, with the ice smooth and flat.

They look like runways, an easy place to land.  But they can be disastrously deceiving, for if it is a young frozen-over lead, the ice is too thin to land on.  You want an old one, locked in over the winter, solid and several feet thick.  So you've got to fly over them and inspect them, especially the edges, very carefully.

Mike had Rocky Parsons as his pilot.  Rocky is as good and experienced as they get, but somehow, Mike got him to land on a frozen-over lead right at 90 that looked perfect – too perfect.

The Otter set down, came to a stop, and everyone began clambering out on the ice with that incredible exhilaration you get from standing on the summit of the earth.  Then the left ski sank through the ice and into the water.  It was a young lead, only a foot or so thick, and it couldn't take the weight of the plane.

Mike and Rocky hurriedly threw out the emergency gear, heavy sleeping bags, food, etc., and got everyone off the lead and onto the pack ice.  They watched the Otter fall through the ice to be swallowed up by the sea.

Rocky radioed for the back-up Otter (there's always a ski-equipped Otter available for rescue), which took a good many hours to get there from the airbase at Resolute, 1100 miles to the south.  After a very risky landing on the rough pack ice, everyone was safely evacuated.

Rocky's Otter was meanwhile slowly sinking into the depths of the Arctic Ocean, finally coming to rest on the sea floor of the North Pole, right where the Russian mini-subs settled 14,000 feet under the frozen surface.  And here's the kicker.

On the Otter was an American flag.

There's nothing at the Pole, for it's at the center of a sea with the ice always shifting and moving.  If you want a candy-stripe pole, you have to bring your own – such as mine, shown here with Jackson in 2003: 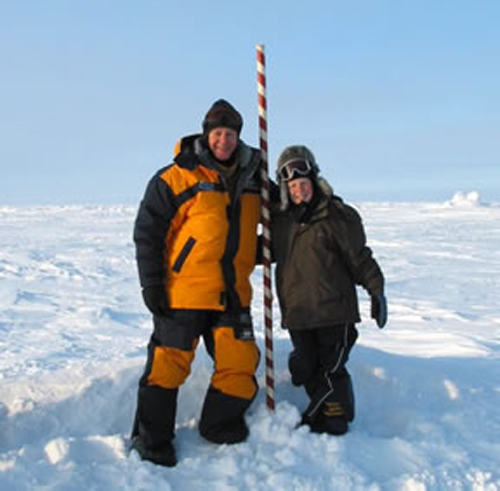 I would also bring an American flag, and thus so did Mike.  That Old Glory stayed on the Otter – all the way to the bottom.  Sorry, Ruskies.  Our flag beat you to it – by 25 years.

The Canadians laughed at the Russians for "planting flags" like they were living in in the 1500s.  But the Kremlin mind-set still being stuck in the days of Ivan the Terrible (1530-1584) is all too frighteningly true.  The Russian bear still deals with the world through threats and bullying intimidation.

For Russia to claim the entire sea floor of the Arctic Ocean based on the geology of the "Lomonosov Ridge" is ridiculous:

You can see the undersea ridge runs all the way across the ocean floor from the Russian continental shelf to that of Greenland/Ellesmere.  In fact, last year (2006) a joint effort by the Canadian and Danish governments was begun to "demonstrate that the Lomonosov Ridge is an extension of the North American continent."  The project is called LORITA, the Lomonosov Ridge Test of Appurtenance.

The US made fun of the Russian arctic antics as well.  State Department spokesman Tom Casey said, "I'm not sure of whether they've put a metal flag, a rubber flag or a bed sheet on the ocean floor… (but even if) they went and spray-painted a flag of Russia on those particular ridges is not going to make one iota of difference."

And yet, and yet…  once the ridicule is over, if GW uses his brains, he'll spot the opportunity (or maybe a presidential candidate will – like Rudy?).

The opportunity is to convene a conference strictly limited to the five nations directly bordering the Arctic Ocean (Russia, Norway, Denmark, Canada, and the US) for the purpose of dividing up ownership of the Arctic Ocean between them.

The Arctic Ocean would be a private pie, the slices running from where the countries' borders meet in a straight line coming together at 90º North.  The billions of barrels of oil and trillions of cubic feet of natural gas can then be extracted by each country in their now-territorial waters.

No bullying, no threats, no stunts – just a win-win deal between everyone.  And just maybe, it would dawn of the Russians that such win-win deals are actually possible, for their medieval mind-set has always been win-lose.  For they would get by far the biggest slice of the Arctic Ocean Pie.

The other great benefit to this deal is it shuts the UN out.  No "Law of the Sea" treaty with the UN owning the seabed.  A private ocean with no UN participation or involvement.

For unless the ocean is privately and peacefully divided up by its bordering countries, the UN camel will get its nose under the arctic tent, claiming it has the authority over all those billions of tons of oil.

So – which current or aspiring White House occupant will be the first to recognize the geopolitical and economic bonanza of the Arctic Ocean Pie?

Ps:  Here's the kind of plane lying at the bottom of the sea floor at the Pole that the Ruskies failed to see:

3 Responses to THE ARCTIC OCEAN PIE