THE AGEING OF THE DAWN OF AQUARIUS IN EUROPE 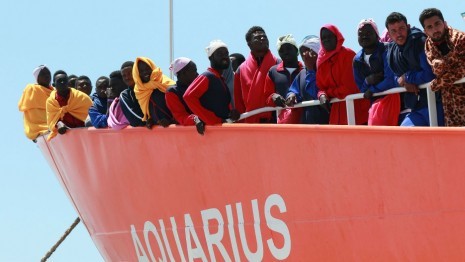 When every last Trudeau eyebrow has been scraped off the floor of the Manoir Richelieu, it’s worth remembering that the divisions in the G7 are not quite as straightforward as the media would have us believe. For one thing, it’s not G6 vs. Trump, for there’s another disrupter in town: 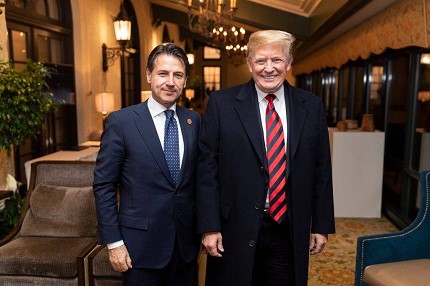 Signor Conte heads what would once have been regarded as a pantomime-horse coalition of two rear ends: the left-wing Five Star Movement (M5S) and the right-wing Northern League (Lega).

The so-called GroKo – the Christian Democrat/Social Democrat “Große Koalition” that governed Germany for most of the last thirteen years – was regarded as an alliance of all the prudent, sensible, mainstream persons.

You know, the kind who think nothing of admitting one-and-a-half million poorly educated, largely unemployable, demographically transformative young Muslim men into a country and then wondering why the gang-rape statistics are through the roof.

By contrast, the new Italian government is a coalition of the non-prudent non-sensible non-mainstream – the “alt-left” and the “far-right”. So how can that possibly work?

Well, we’re about to find out. In the two weeks he’s been in office, the new Interior Minister, Matteo Salvini (leader of the Lega) has talked non-stop about migrants and his plans to deport over half-a-million of them: “The good times for illegals are over,” he declares confidently. “Get ready to pack your bags.”

On election day, his party won 17 per cent of the vote; after a fortnight of deportation talk, he’s up to 27 per cent. Having talked the talk, he’s now walking the walk:

Thanks to him, for the first time since the “humanitarian crisis” began five years ago, the Italian government has closed its ports to a migrant vessel: The MV Aquarius, operated by SOS Mediterranée and Médecins Sans Frontières, was refused permission to dock in Sicily, and told to push off and find somewhere else.

What could be more heartwarming than an NGO rescue ship named after a song from Hair?

Since February 2016 it’s been cruising the waters of the southern Med off the coast of Libya waiting for some ramshackle “refugee” craft to sink in front of it, and then scooping up the migrants and delivering them to Italy.

That’s in defiance of maritime law, which requires those rescued at sea to be taken to the nearest safe harbor – which is how the Titanic survivors and non-survivors wound up in Halifax, Nova Scotia. The nearest ports to Libya are in Tunisia, which no one wants to go to, or Malta, which refuses to take any of these ships.

So, for years, maritime law has been honored in the breach, and it’s been understood that, when you’re picked up in the water just off Tripoli, Misrata or Benghazi, the nice EU do-gooders ferry you up to Italy, whence you’re free to wander at will through the Continent until you reach the lush welfare pastures of Germany and Scandinavia.

Until Sunday night (6/11), that is – when Signor Salvini said No – take a hike. Eventually the Aquarius docked in Spain, whose new government is of more conventional bent (i.e., socialist).

The 629 “migrants” are as unwanted there as in Sicily: Spain’s youth unemployment rate is 35 per cent, which is even higher than Italy’s (32 per cent), albeit lower than Greece’s (42). The difference is that Madrid’s government remains, for the moment, within the ranks of the respectable.

When commentators bleat about the incoherence of Italian-style “left”/”right” coalitions, they’re missing the point. As Steve Bannon writes in The Spectator:

“From my recent European trips across Switzerland, France, the Czech Republic, Hungary and Italy, one thing is clear: people on both the ‘left’ and ‘right’ feel that they have been the punchline of a long-running joke by the Party of Davos.”

I think I can claim to have got there a little ahead of Mr Bannon.  Way back in 2004, I commented in the London Telegraph:

“In much of western Europe, on all the issues that matter, competitive politics decayed to a rotation of arrogant co-regents of an insular elite, with predictable consequences: if the political culture forbids respectable politicians from raising certain issues, then the electorate will turn to unrespectable ones.”

If they’re allowed to. The UK electorate voted for an unrespectable policy (Brexit), which a respectable politician (Theresa May) promised to implement, reiterating again and again that, if it was a choice between a “bad deal” (i.e., on Brussels’ terms) or no deal, she’d take no deal.

That’s gone out the window in recent weeks: the co-regents are back in the driving seat, and Brexit is being transformed into some Hotel California type of EU membership: You can check out any time you like, but you can never leave.

The left/right paradigm became irrelevant because so called “conservatives” such as Mrs. May and Frau Merkel helped make it so. If elections make minimal difference, why would the distinctions between parties matter to any but the professional political class?

Consider, for example, this poll question: “How serious a threat to Europe is the rapid population growth of Muslims?” Those who thought it a very or somewhat serious threat:

When a policy concern of 65 to 70 per cent of the people is regarded as unmentionable by all mainstream parties, you have a crisis of democracy.

Such a crisis can be (peacefully) resolved in two ways – either by the people turning to new parties, as in Austria, whose government is now closing mosques and expelling imams; or by the parties turning back to the people, as in Denmark.

That’s where the Social Democrats, the largest parliamentary caucus for almost the entirety of the last century and the party that build the modern welfare state and gave us Helle Thorning-Schmidt (the Nordic cutie who was doing selfies with Obama and Cameron at Mandela’s funeral), has recently decided to move more “in line with the view of Danes on immigration, and we will continue on that route.”

Will they move as far as the Italians? Doubtful. But, in Scandinavia as in Mediterranean Europe, for more and more citizens the survival of their nation as they have known it is the overriding issue.

Politics is downstream of culture, as Andrew Breitbart liked to say, and, when culture – and the survival of a culture – becomes political, chit-chat about tax cuts or this or that social program is never going to suffice.

I was in Italy two summers ago and, as in France, as in Germany, as in the Low Countries, as in Scandinavia, I found nobody outside the ruling class (politics, media, celebs and profs) who believes a word of the official lies on Islam and immigration.

To the European press, ships like the MV Aquarius are “rescue vessels”; to Italy’s new Interior Minister, the likes of SOS Mediterranée and the other NGOs are “smugglers of a substitute people.”

From my own unscientific head count, the people incline more to Signor Salvini’s view than the media’s, and increasingly they will vote soberly and un-starry-eyed. It is not 2015, and no one cites Mutti Merkel’s “We can do this!” except as a punchline.

This is the ageing of the dawn of Aquarius.

Mark Steyn is the author of America Alone: The End of the World As We Know It, and is frequent commentator for Rush Limbaugh, Tucker Carlson, and Sean Hannity.