2 The Point News » Guest Authors » Members Only » THE ADULTUROUS BIDENS 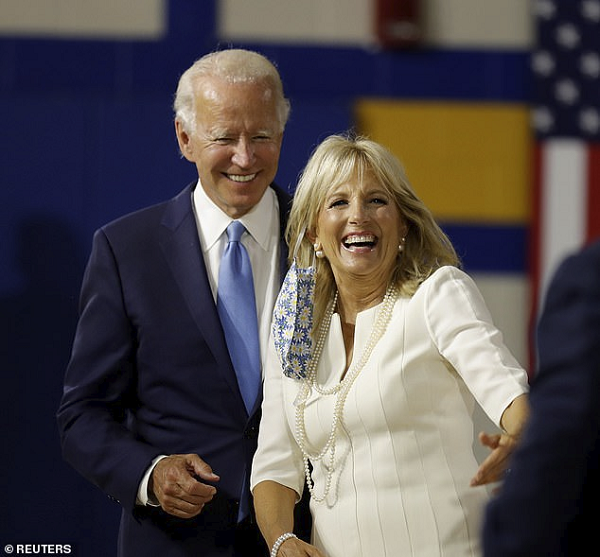 For 48 years they’ve lied to the world

Ordinarily, most of us wouldn’t care too much about a political leader’s love life. After all, President Trump is a stellar president but his personal life hasn’t been perfect. Big deal. Trump’s never brought it up to win votes out on the campaign trail.

Joe Biden’s different. He’s using the occasion of his previous wife, Neilia Hunter Biden’s death in a car crash along with that of his baby daughter to tell us how compassionate he is, in a bid to reap political hay.

Michelle Obama, in her taped-days-ago Democrat convention speech last night (8/17), brought it up, selling it to voters as proof that he’s a nice guy.

“When he was a kid, Joe’s father lost his job. When he was a young senator, Joe lost his wife and his baby daughter. And when he was vice president, he lost his beloved son. So Joe knows the anguish of sitting at a table with an empty chair, which is why he gives his time so freely to grieving parents. Joe knows what it’s like to struggle, which is why he gives his personal phone number to kids overcoming a stutter of their own.”

So did Rep. James Clyburn, touting the “narrative”:

“As the country continues to grapple with the coronavirus pandemic, Clyburn also commended Biden’s understanding of ‘profound loss, and what it takes to bounce back.’ Biden’s first wife and daughter were killed in a car crash shortly after he was first elected to the U.S. Senate in 1972, and his son, Beau, died of brain cancer in 2015.”

Here’s the glurge from his adoring reporters at CNN:

“Joe Biden says he contemplated suicide following the 1972 car crash that killed his wife and daughter, opening up about his personal encounters with loss in pre-released clips on Monday from an upcoming documentary.

The presumptive Democrat nominee’s life has been defined by the deaths of those close to him. Although tragedy forms a crucial part of his political outlook, Biden’s comments represent some of the most intense disclosures about his mental health struggles after the deaths of his family members.”

But now Jill Biden’s first husband has turned up to suggest that Joe’s love and compassion for his then-wife Neilia was far from certain, given that he was likely sneaking around on her and well into a love affair with married-to-another-man Jill when the crash happened

“Jill Biden’s ex-husband has accused the potential first lady of having an affair with Joe Biden and says they lied about how they met in the 1970s, according to a bombshell new report.

Bill Stevenson on Monday [8/17] accused the presumptive Democrat nominee of being a home-wrecker and says the feel-good story of how Joe and Jill met on a blind date is completely made up, the Daily Mail reported.

‘I don’t want to hurt anyone,’ said Stevenson, now 72, who is working on a book that includes the lurid claim. ‘But facts are facts and what happened, happened.’

Stevenson and his then-wife grew close to Biden in 1972 while working on his first campaign to represent Delaware in the US Senate.”

The account says that Stevenson first suspected an affair in 1974. But the pair “grew close” during his 1972 Senate political campaign, which predated the crash. Was Biden sneaking around on Neilia even then? There was a distinct possibility of it, given that the affair was secret.

Which if true, would suggest that maybe he didn’t like Neilia as much as he claims to have liked Neilia. Worse still, did he breathe a sigh of relief that she was gone without a divorce? Maybe someone should ask.

Biden’s using the whole thing now to declare himself a nice guy in pointed contrast to President Trump, but there’s nothing nice about sneaking around on your wife or breaking up another man’s marriage.

It’s not the first time Team Biden has used that incident for that.

Biden also told a phony story about the tragic crash as the work of a drunk driver to prove he’s all against drunk drivers.

“Let me tell you a little story. I got elected when I was 29, and I got elected November the 7th. And on Dec. 18 of that year, my wife and three kids were Christmas shopping for a Christmas tree. A tractor-trailer, a guy who allegedly — and I never pursued it — drank his lunch instead of eating his lunch, broadsided my family and killed my wife instantly, and killed my daughter instantly, and hospitalized my two sons, with what were thought to be at the time permanent, fundamental injuries.”

This, after the driver’s family begged him to stop the provably phony story, and he sent a note back saying he meant no harm. He kept using it. (And ruined the driver’s life in the process: he was not drunk, the crash was Neilia’s fault, not his.)

And at the Democrat debate in June, he “opened up” about the crash again and used it to plug free health care:

“When my wife and daughter were killed in an automobile accident, my two boys were very badly injured, I couldn’t imagine what it would have been like had we not had adequate health care available,” Biden said from the stage.

This is one slippery political opportunist, dining out on his wife’s death for all sorts of political causes. If he was sneaking around on her even before she died, all the more disgusting.