2 The Point News » Behind The Lines » Members Only » THE ADDRESS TO THE NATION PRESIDENT TRUMP SHOULD DELIVER ON MAY 1ST – BUT WILL HE?

THE ADDRESS TO THE NATION PRESIDENT TRUMP SHOULD DELIVER ON MAY 1ST – BUT WILL HE? 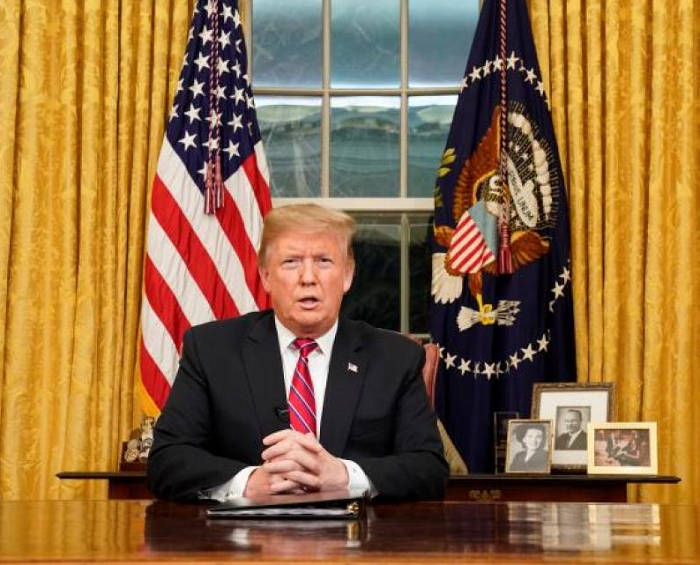 My fellow Americans.  I have said repeatedly during the terrible ordeal our country and the entire world has been enduring, that “the cure cannot be worse than the disease.”  Now at last we have convincing evidence that has been the case.

I have come to the conclusion, along with a substantial number of medical researchers, that the lockdowns of our society have been a gigantic mistake – rather than preventing the spread of the Covid-19 virus, they have prevented the virus from dying off in what is known as “herd immunity.”

The evidence of numerous antibody studies in state after state and in other countries that test if one has already been infected show clearly that the number of reported or confirmed cases is only a small fraction of actual cases.

That is because over 90 percent of those who get the virus hardly know they have it as their symptoms are so mild or non-existent.  They get it, their immune system creates the antibodies to protect them, they are cured with their cases never reported.

That is what these antibody studies are showing – somewhere around one-tenth of one percent of those infected with the Covid-19 virus die.  Around 99.9 percent of people infected live, with most never getting sick at all.

Now, we are a big country, with a population of 330 million.  One percent of them is 3.3 million, and one-tenth of that is still 330,000.  These are the people we must focus our protective efforts upon.  Who are they?

First, who are they not?  The evidence clearly shows in the death records of who has died of this virus so far.

The young are not at risk – the number of Covid-19 virus deaths under the age of 25 are extremely rare, those under age 10 virtually non-existent.

In fact, for anyone under the age of 65 in normal health without a serious pre-existing health condition, they are at minimal risk.  Dying of Covid-19 is very rare among them.

It is, therefore, imperative that we concentrate upon and protect those among us primarily at risk, our citizens 65 and older, most especially if they have serious pre-existing health conditions.

These are our fellow Americans whom we must ask to self-quarantine and take the necessary precautions to protect themselves from viral infection.

However, for the rest of us, it is imperative that we be liberated from the catastrophic closure of our lives and economy.

It is imperative that our schools be reopened.  Children are certainly at no greater risk from Covid-19 than seasonal flu.  We don’t close our schools every winter during flu season.  We never should have closed them at all during this crisis.

It is imperative that our lives no longer be shut down staying at home.  All but the elderly are not at real risk.  We need to get out into fresh air, go to the beach, walk or play with our kids at the park. Go where we want, do what we want to do, lead a normal life again, start having fun again.

It is imperative that our businesses be reopened, that people get their jobs back, that our economy start flourishing as before.

I implore our governors and mayors to open up their states and cities, liberate their people from stay-at-home edicts, let their children go back to school, let business owners get back to business, let everyone get back to work.

And regarding the other imperative, that they focus their efforts on protecting and caring for the elderly at risk.  Leave everybody else alone.

My fellow Americans, I must accept as your President, my responsibility in this.  I and my administration, along with my virus task force, tried our very best with the evidence we had at the time.

I ordered a ban on flights from China before anyone else, and then on those from Europe.  I still believe that stopped a much greater spread of the virus that originated in China and saved many lives.

Our task force and I then concluded, based on computer models which we now know were faulty, drastic measures threatening the life-blood of our economy were necessary to protect the lives of millions threatened by Covid-19.

Now there is new evidence, which shows these drastic measures of locking down the entire economy, instead of focusing on the elderly at risk, was a colossal mistake.  The ruination of the greatest economy on earth was wholly unnecessary.

So it is that I, as your President on this May First, declare that this ruination is over.  We have endured over the past three months a short yet deep Dark Ages, and today, the rebirth, the Renaissance, of our economy begins.

I declare that the lesson of this crisis and the mistakes made in response to it will be to expand our freedom rather than expand government control over our lives, as most past crises have done.

I pledge to you that I will do everything in my power to make your lives more free and more prosperous than ever before.  That I will use this crisis as an opportunity to so.

Thank you, God bless you, and may God bless America.