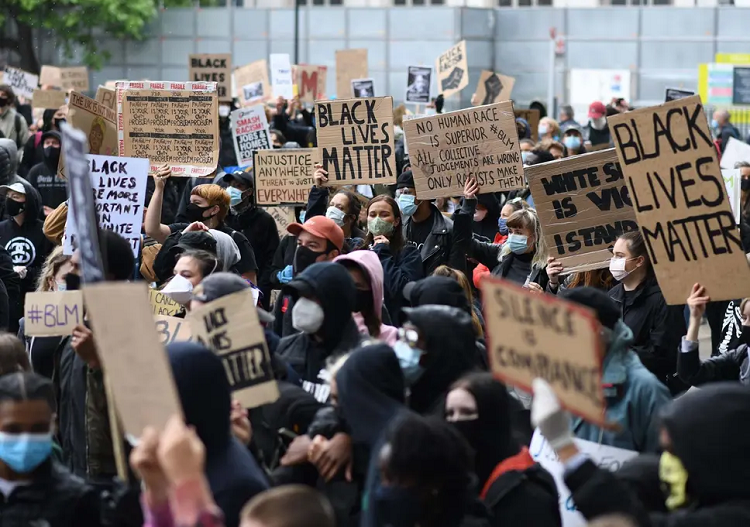 The “peaceful protests” against the terrible brutalization and death of George Floyd soon either themselves turned violent or, in many cases, were hijacked by Antifa operatives and opportunistic looters or both.

It was certainly not as alleged a “small number” who destroyed swaths of New York, Santa Monica, Minneapolis, or Philadelphia.

After watching hours of such footage of mayhem and destruction, one can glean a few rules that the rioters apparently followed quite religiously. And they are often disconcerting if not bizarre. Here is a sample of 10.

In our culture of narcissism, rioters seemed intent on obsessing with their smartphones, often to capture their criminality with as many selfies as possible, as well as recording friends’ crimes in action. It was almost as if looting was envisioned as performance art.

Was the logic that there is always time to steal and burn, but not so much to capture oneself momentarily breaking and entering for posterity? Why would anyone take time to record the act of lighting up a store or kicking in a window?

Is the postmodern assumption that when one posts these revolutionary acts on Facebook, some Hollywood talent agent in his Malibu home gym might spot the scene in cyberspace of shattering glass or defacing the Lincoln Monument and Skype his interest therein in a future actor? Are there stars born among the flames?

Apparently, one may hate the state and its rules of law and order, but government still has a point when it comes to a 1-in-1,000 chance of dying from COVID-19—and in the prime of life.

Obviously, there are some dangers associated with lighting fires, blowing up cars, tossing Molotov cocktails into police vehicles, and entering a small business where the owner could be armed—but why take additional needless risks?

So some rioters wear masks to protect both their own health and that of their fellow looters—and I suppose the health, too, of the cops and any innocent bystanders they happen to assault.

Is it deemed more or less evil to wear a mask while hitting a store owner over the head with a two-by-four?

Moreover, the ubiquity of masks seems to denote multiple uses: hiding identity while protecting the lungs from the toxic fumes one ignites? Masks not worn en masse while damning capitalism seem exempted acts in a way that masks worn by single individuals while trying to make a living are not.

What will be the governors’ new narrative about masks and social distancing: if you wish to protest, even loot or burn, the state grants you permission to violate quarantine, but only as long as you don’t try to reopen an urgent care or a florist shop?

In a crusade to end racial hierarchy, some protestors seemed adamant in practicing racial separatism and spacing.

Young, white, single, childless, upper-middle-class kids, perhaps many living in their parents’ basements, are usually stigmatized as Pajama Boys. So often they compensate by posing as hardened deadly revolutionaries.

But, in fact, they also consider themselves precious assets and therefore more equal than others. They have professional futures and with them resumes that a felony indictment might sidetrack. So they ease back in the shadows to plot grand strategy on social media and issue periodic orders where to assemble and which store to torch.

As clever and privileged propagandists, they certainly will be sure that inner-city looters are caught on national television carrying out high-definition televisions, while to the rear they provide the sloganeering, the edgy graffiti, and the bricks and bottles for the foot-soldiers they order callously into battle.

In Minneapolis, it was reported that mostly white looters destroyed a black-owned business purportedly on behalf of the Black Lives Matter.

Does Antifa practice proportional representation and disparate impact? And if not, why not?

Why do not the soldiers of a revolution that seeks to bring social justice to the underclass that is deprived of the very staples of daily existence, focus on life essentials? Why instead do they hunt Louis Vuitton bags, Nike sneakers, iPhones, and laptops?

Are these treasures edible? Is the point to destroy capitalist triflings or to run off with them? What is the logic of officials in major cities who plead with Walmart to stay in the inner-city, after its unguarded stores were left to be attacked and ruined?

Those in academia, Hollywood, and the media count on rioters to be arrested for the cause, and they certainly will generously provide electronic bail and moral encouragement on Twitter. The heroism of those with two-by-fours and rocks will be championed from the Upper West Side and Menlo Park.

The elite Left asks only of the looters to keep clear of Palos Verdes Estates and not enter Westchester.

After this is all over, it is assumed that their present empathy in a moment of revolutionary fervor does not mean that the children of those arrested will school with those of their abettors.

Looters and rioters will not be welcomed as noble peasants in the sacrosanct feudal keeps of Presidio Heights, and they should not expect a dinner invitation from the Hollywood Hills. The Malibu manor walls of Cher and Barbra Streisand will not come down with the revolution.

Cyber-solidarity between left-wing rich and poor, white and black, ends when the last rock is thrown and the final match is lit.

Rule No. 6: The Children

Demonstrators never know who is among their arrested. Take, for example, New York Mayor Bill DeBlasio’s daughter, who sympathizes with the looting her dad seems to fuel. Or Keith Ellison’s councilman son who praises Antifa and wants to abolish the police.

Perhaps consider Minnesota Governor Tim Walz’s daughter, who was supplying Antifa with tips about the arrival of the National Guard. Or U.S. Representative Ilhan Omar’s (D-Minn.) daughter, who was shouting that the United States is racist from the barricades.

On the battlefield, the police chief, the mayor, the state attorney general, and the governor are strangely seen as allies, so much so that some seem willing to give over their Twitter-warrior children for the cause, at least momentarily in zero-bail states.

What was the purpose of setting St. John’s Church on fire, breaking into a Lincoln automobile dealership, or defacing the World War II monument and the Lincoln Memorial?

Was all that the best way to pay homage to the memory of George Floyd and express discontent over his death and brutalization while in Minneapolis police custody?

Was there burning and stoning because the progressive authorities did not quickly enough charge the police officers responsible for Floyd’s death with murder and manslaughter? Was there rioting because the mayor of Minneapolis was a reactionary or the governor of Minnesota was a right-winger plotting to protect the offending officers?

Did the arsonists have no confidence in Minnesota’s attorney general, who now oversees the case, and in the past had provided support and empathy for Antifa?

Nothing is more embarrassing for journalists on camera, while assuring America of the demonstrators’ passivity and lawfulness, than to see flames lick the top of their television monitors.

Why would one clumsily leave an empty Adidas box at the feet of a sympathetic reporter to be captured on live television as he waxes on about the calm in the night?

Why would a PBS reporter Yamiche Alcindor assure us that Donald Trump is an incendiary figure for having suggested looters were anarchists and then send along a photo of demonstrators defacing monuments with anarchist symbols as proof Trump was wrong?

What sums up the media in this moment? In the midst of the chaos, MSNBC hires Lisa Page, of the renowned but now mostly fired FBI legal all-stars dismissed from the Robert Mueller dream team, and the heroine of the Strozk-Page text trove psychodramas.

There seems to be no such thing as “collateral damage.” Rioters consider themselves the human equivalent of Obama-era drones in flight over Pakistan that cannot possibly distinguish the enemy from civilians.

If one errs and brutalizes a woman in a wheelchair, stomps a confused trucker trying to deliver gas, renders an elderly woman bereft of her local pharmacy, or bludgeons a middle-aged woman in front of her store, then it seems to be chalked up to “s—t happens.” or in a more revolutionary sense, “Omelets cannot be made without breaking eggs.”

Are rioters fans of the protocols of the rogue cops who feel they can beat up the arrested to advance law and order—as they burn, loot, and beat to show us our shared future of racial ecumenicalism and tolerance?

Finally, the media advises rioters to be careful not to do anything stupid. Like over-burning or hyper-torching, perhaps?

Susan Rice warns us that there are purportedly all sorts of Russians out there armed to the teeth. Homeowners are written off as the deluded who mysteriously believe that they have a right to stop looters battering in their doors.

A few nutty bakers and liquor store owners are armed and they are deranged enough to shoot when a rioter merely shatters their glass or politely steals some whiskey.

Yet most store owners and capitalists are expected not to be armed with “automatic” weapons in front of their stores defending “property” over “lives.” So in bullying fashion, looters focus on the weak and unguarded, not the strong and dangerous.

We are told that some reactionaries in America still believe in that ludicrous idea of “private property” and “brick and mortar” and they actually assume that saving what they themselves have stolen from the people is worth dying for.

And so they are usually avoided. Looters and rioters remind us of the Neanderthal logic that deterrence discourages the cowardly while laxity whets his appetite.

Finally, were these riots and the destruction of shops inadvertently designed to show us that we need more gun control? Were these to be arguments for disbanding the police? Were the defacements of the World War II monument and the memorial to the black veterans of the Civil War supposed to be advertisements for the need for “unity” and “tolerance”?

Were the thefts from Nike stores to remind us of an impoverished barefoot nation? Or were the massed protests and shoulder-to-shoulder looting a planned scientific shock experiment to show us that social distancing had become outdated, or the lockdown was far past its prime, and the virus tired and in retreat?

Finally — was the point of these Trump-haters to end the lockdown by massing without masks, and thereby jumpstarting the economy to get Trump reelected?