2 The Point News » Behind The Lines » Members Only » STOP SEPARATING FAMILIES! 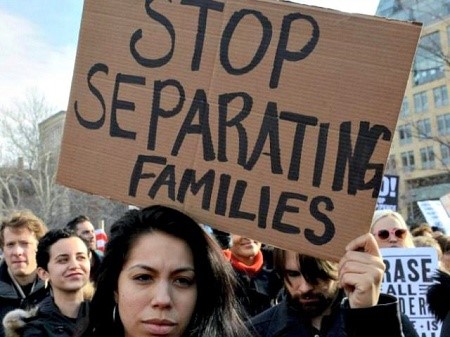 What normal person capable of human compassion could disagree?  Who would advocate or actively work to achieve breaking families apart?  It’s a moral given:  Of course those involved should stop separating families.

All conservatives and patriots should agree that the US government’s immigration policy have as a moral goal to Stop Separating Families – right?

On Monday (2/19), the New York Times published an op-ed by a “DACA recipient” or “Dreamer” named Antonio Alarcon entitled “Senators, Dreamers Are Watching You.”  Referring to the Senate’s defeat of an immigration bill last week (2/15), he wrote:

“Why am I glad that senators voted against legislation that would have given me a path to citizenship? Because those bills would also have harmed people I loved.

On Tuesday (2/20), Breitbart’s response was headlined: DACA Illegal Aliens March in Lockstep With Democrats: Maintaining Chain Migration Takes Priority Over Amnesty.  The photo above is from that story.

Breitbart focuses on the practical consequences of disastrously massive immigration numbers due to “chain migration,” and condemns its Democrat and Establishment Republican supporters:

“While chain migration is essential to big business interests for a never-ending flow of mostly low-skilled foreign workers to the country – keeping U.S. wages low and stagnant – for Democrats and the open borders lobby, chain migration represents future electoral dominance.”

That is completely true – and completely irrelevant to the moral argument, that practicality aside, it is immoral to separate families.

“Chain migration” has been positioned by the Left as a moral issue, and needs to be debated on that ground.  So here we go.

The place to start is first to agree with the moral premise of the Left, that it is immoral to separate families.  We’re all now on the same level moral playing field.  Then we need to ask the critical question:

Who are the people separating families?

Obviously, if you want to stop separating families, you need to identify those individuals who are responsible for the separating.

For the Left, the answer is equally obvious – the Racist Evil Deplorable Conservative Republicans who oppose America’s true values.  As one Libtard Dem Illinois Senator puts it:

Yet as Sen. Duckworth admits, however unknowingly, her senatorial opponents and their supporters cannot be the culprits here – for she is talking about “family reunification.”  A family that was once unified but is now no longer, needs to be reunified.  Okay, fine, Tammy, we agree.

So now, Tammy, you get to answer this question, how did the family get un-unified in the first place?  Let me help you out here.

Wouldn’t that be by a citizen of a foreign country breaking his family apart by coming to America, illegally or legally, and leaving the rest of his family behind?

If you really want a family to be re-unified, Tammy, then clearly the easiest solution is for the person who un-unified it to return to his native home and reunify his family where they all live.  And the most moral solution, for the moral responsibility of this entire problem is with the person who caused it.

No US politician – not President Trump, not any Senator or Congressman – has caused the breakup of any family into those residing in and out of the US.

None of them forced a foreign citizen to sneak illegally across our border, or to stay here illegally if their parents did so, breaking up their families thereby.

None of them forced a foreign citizen to immigrate here legally.  Yes, this is a nation of immigrants who came here to become citizens and voluntarily left their families behind.  Tens of millions of Americans have relatives in foreign countries.  They go back to where they live and visit them – the relatives don’t get a free pass to US citizenship.

So Tammy’s argument for chain migration applies to legal immigration – and makes a total mockery of her ludicrous attempt to apply it to illegal aliens, people here in willful violation of US immigration law.

People like “Dreamer” Antonio Alarcon.  Mano a mano, Antonio:  You are in America because your parents snuck here illegally, bringing you with them.  This give you absolutely no moral right whatsoever to demand your aunts and uncles get to come here too.

Antonio, you say “I’m going to graduate from college in May. But will I be able to use my degree?”  Of course you can – use your education to make your and your family’s country a better place.  You claim to be “a warrior” for your family – please be one where they live, not where they don’t.

All illegal aliens, all DACA Dreamers, need to hear this message:  Stop separating your family – go back home and live with them.

It’s the obvious moral solution for those demanding to Stop Separating Families.