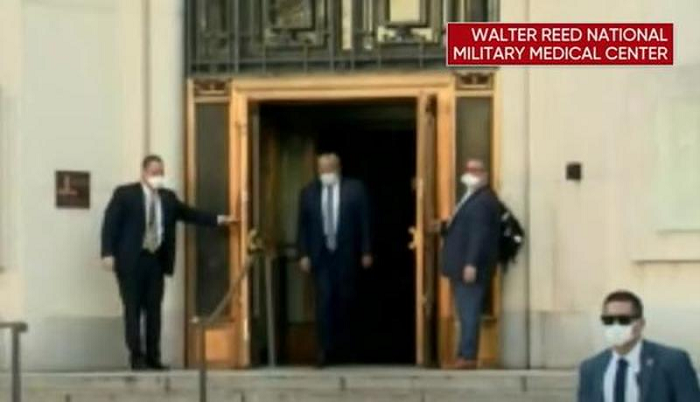 Who targeted the President?

October surprise? 32 Republicans and 0 Democrats infected at the latest count.  The second picture is provocative:

Asking The Question That Nobody Dares To Ask Publicly: Who targeted the President?

Los Angeles’ content-based speech restrictions are a First and fourteenth Amendment no-no.  Doesn’t it just fry the LA City Council liberals’ bacon to have to pay the NRA?

Interesting poll data.  Especially relevant: “Eighty-seven percent of Biden supporters said they were “comfortable with relatives, friends, coworkers knowing how you vote,” but only 22 percent of Trump supporters with the same.”  This suggests that the pro-Trump polling numbers may be a substantial understatement.

Political activism has consequences; people watch sports to escape, not to be guilted:

Trump does the right thing again:

Are you bugging yourself?

How The DNC Hired CrowdStrike To Frame Russia For The Hack

The FBI and CIA will disobey, but if Trump wins, he is likely to make them pay:

Not a bad idea at all!

Only Full Transparency Will Save The CIA And FBI Now

Why all the swamp sausage makers hate Trump:

“There Are Trillions At Stake…” – How Washington Really Works, & Why Its Denizens Despise Trump

I agree with Dr. Scott Atlas as to where we should go from here, and that his proposed policy is long overdue:

The Pandemic That Killed Debate

Plagues and social change.  Although the China Virus is nowhere near as widely deadly as historic pandemics, it is the emotional reaction to the pandemic, not the mortality rate,  that drives the social changes.  Current western generations have had a very easy life compared to that of our ancestors, and the past few decades has greatly exacerbated snowflakism and lack of resiliency.

Zerohedge article; it is brilliant and urgent. Jack provided a link to this in last Friday’s HFR, but in case you didn’t click on it, please do. A long valuable quote and my comments below.

Is The Pussification Of America’s Youth Scientifically Engineered?

Thank you very much, Jack!

This HFR has a link to an exceedingly important article.  I very strongly implore you to read it. In part, it says:

“While researching stress inoculation methods, it struck me – What if a society was to do the exact OPPOSITE of this? What if an entire generation of children were deliberately sheltered from all forms of short term acute stress?

What if they were encouraged to never work hard at anything? What if they were not given any incentive to accomplish any goals? What if competition was discouraged and children were taught to despise it as “barbaric” and “debilitating”? What if accomplishment was dismissed and the idea of “winning” was eliminated in the name of “fairness and equality”?

What if a generation of kids were so thin skinned and untrained in stress management that they panic and run to the nearest authority figure for help at the first sign of trouble? What if they were so spoiled that they had never learned to take care of themselves? What if all of their life experiences were in the form of a safe, insulated digital fantasy world where there is no real risk?

Now imagine you then take this highly coddled and sheltered generation and you suddenly expose them to a massive crisis event; such as an economic crash, or even the threat of a global pandemic? How would this group of children, now moving into adulthood without any practical skills or emotional toughness, respond to the situation?

All of their actions would be reactionary and rooted in panic and terror. Because they have never trained to deal with acute stress events they are now a walking time bomb of fear. They might respond by running and hiding, or they might respond by lashing out violently, but in either case they will have no self-control and will be ruled by emotion and adrenaline rather than logic and reason.

Wouldn’t this be the most effective way to destroy or dominate a nation over the span of a couple decades?

In America today there is the more obvious trend of social justice warriors among younger generations and their complete inability to function in normal adult society without constant protection.

What is the purpose of concepts like “safe spaces”, trigger warnings, forced diversity, intersectionality, critical race theory, micro-aggressions, implicit bias, etc., other than to artificially swaddle people so they never have to deal with negative experiences?

The only reason for the existence of so-called “victim groups” is for people who have no stress management skills to continue to avoid any and all acute stress events for the rest of their lives by making it socially or legally unacceptable to criticize them, discriminate against them as individuals, or place practical demands on them. They become a protected class with special privileges.

The only reason for the existence of so-called “victim groups” is for people who have no stress management skills to continue to avoid any and all acute stress events for the rest of their lives by making it socially or legally unacceptable to criticize them, discriminate against them as individuals, or place practical demands on them. They become a protected class with special privileges.

They deny the need to compete based on merit in the working world because they claim competition is “racist” and creates inequality. Anything that causes them stress is immediately deemed an “aggression” against them personally, and all stressors are treated as equally offensive; meaning, an insult or criticism becomes the same as a physical attack, and they react with the same level of emotional panic to both.”

This Rand document on stress inoculation for warriors is linked in the Zerohedge article: I urge you to read it in full:

Read the above documents and prepare yourself and your family to be more stress resilient. Our situation is likely to become much worse – no matter who, if anybody, wins the Nov. 3 election – for the next few years.