2 The Point News » Kelly's Panorama » Members Only » SHE GUEVARA

The most popular Democrat in America today is… Alexandria Ocasio-Cortez.

A newly elected Member of the House of Representatives, barely a month in office, with no prior accomplishments whatever is the newest political rock star.

Should we laugh? Cry? Fear her, or celebrate her celebrity?

Why has AOC (Airhead of Congress) become so well known, so popular among Democrats, in so short a time?

“3B,” the Bug-eyed Brainless Bolshevik isn’t a great beauty, but she’s substantially more attractive than Nancy Pelosi, Fauxcahontas, Hillary. She’s a fresh face in a party that desperately needs one.

She’s ridiculed all over the Internet as Alexandria Occasional-Cortex… 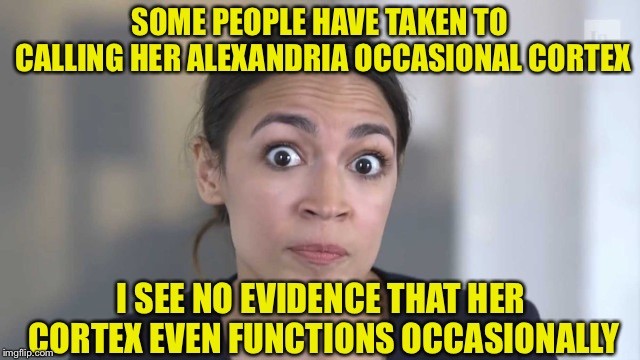 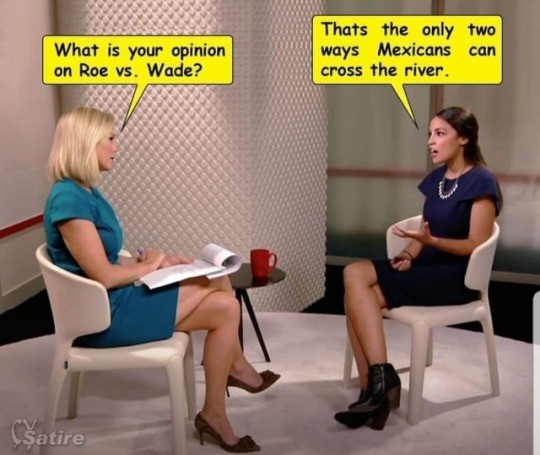 Yet she’s popular with Millennials, most of whom are nearly as ignorant of history, civics, economics and basic math as she is.  How popular among the legions of young ignorami? 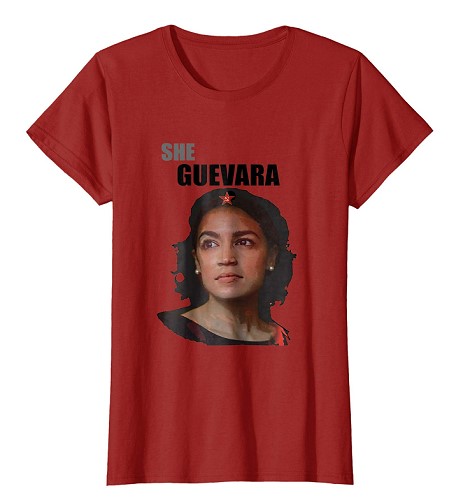 AOC is especially popular with journalists, most of whom are left wing Millennials who agree with the nonsense she spouts, share her enormous self regard.

She Guevara burst on the scene just as the Democrat party began a Great Leap Leftward. Why the sudden shift? Brian Cates explains it well here.

With the nomination of George McGovern in 1972, Marxist radicals began their takeover of the Democrat party. Their goals were explicitly anti-American, so they concealed them, were content to move slowly, incrementally, because they were confident of ultimate victory.

With the election of Barack Obama, the radicals thought they were on the cusp of victory. Zero weaponized the federal government to rig elections. When Hillary finished what Obama started, their grip on power would be absolute, perpetual.

But then Trump won, began rolling back the “progress” Obama had made.

“Can you imagine what it feels like to climb a mountain slowly, one foot at a time, for 40 years, and then just as you are about to reach the mountaintop and stay there forever, some ORANGEBADMAN shows up and shoves you downward and you slide back a couple of miles?” Brian Cates asks.

Frustrated and enraged, leading Dems doffed their masks. They demand right now what they’ve wanted all along.

So enters, stage Left, AOC, poster child for the new, true face of the Democrat party.

We should fear AOC some, because she is so popular with other Millennials, by far the most pro-Democrat of generational groups. We know she spouts nonsense, but many of them don’t.

Millennials want to tear down the system because they think they’ve been screwed, says Kyle, a Millennial himself. They are excited, not repelled, by her radicalism.

“Socialism is an economic disease born of envy and ignorance,” writes Michael Knowles. “The sickness has found an attractive spokeswoman – perhaps, sadly, the voice of her generation.”

But, mostly, we should be delighted Alexandria Octavio-Cortez occupies center stage in the Democrat party.

But most in the mob who are running next year have kissed her ring. Sens. Kamala Harris, Corey Booker, Fauxcahontas, Amy Klobuchar and Bernie Sanders all endorsed her Green New Deal.

We should hang it around their necks like the albatross in the Rime of the Ancient Mariner. Ridicule is the most potent weapon in politics, is especially effective against the thin-skinned.

College students lose their enthusiasm for the Green New Deal when they are told what’s in it.

Backpedalling furiously, AOC claimed, first, her Green New Deal resolution and accompanying fact sheet didn’t say what it said; then that it had been “doctored;” then (when that didn’t fly) that what she put on her web site were just “drafts.” Here’s the timeline of her efforts to lie her way out of embarrassment.

Sane Democrats urge Speaker Pelosi to rein in the Bean-Brained Bartendress before she makes the entire party a laughingstock.

“It’s going to be the most entertaining circus in town to see how (Pelosi) finesses this to prevent a fratricidal war between those willing to destroy their party in the name of Warmist religious fanaticism, and those who are not,” Jack Wheeler says.

Given Pelosi’s lame response to the virulent anti-Semitism of terror supporting Rep. Ilhan Omar, odds are she’ll botch this.

AOC wants to make the Green New Deal the dominant issue in 2020. We should do all we can to help.

Senate Republicans should introduce the Green New Deal resolution as originally presented, have CBO do a cost estimate, then force a Senate vote on it.  Lindsey Graham has already called for just this:

Americans deserve to see what kind of solutions far-left Democrats are offering to deal with climate change. https://t.co/VKTIyfnDCY

Conservative think tanks should do studies on the likely job losses from each bonkers GND proposal, circulate them to workers in the industries affected.

Dem presidential candidates who endorsed the GND should be asked at every campaign event if they took an airplane to get to it. Hypocrisy is more unbecoming than stupidity.

We should shame them for taking their cues from a retarded child.

Most important, we must challenge AOC’s assumption of moral rectitude. Her abysmal ignorance and profound stupidity only partially mitigate, do not excuse, the evil of what she proposes.

The Bug-eyed Brainless Bolshevik is too young to know about Stalin, Mao, the killing fields of Cambodia. She wasn’t taught about them in school. But her endorsement of the oppressors in Venezuela shines a spotlight on her character. 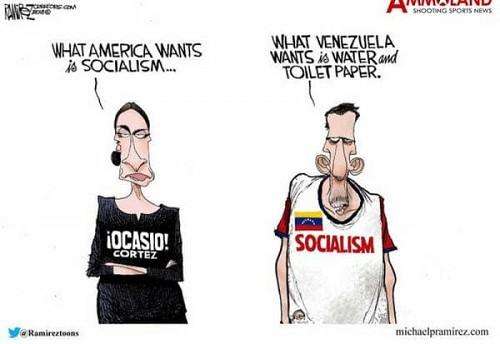 AOC couldn’t have risen so far so fast were it not for wealthy, powerful people behind the scenes who dress her, coach her on media interviews, use their connections to promote her.

Who are they? Why are they doing this?

There’s speculation on 4Chan the “deep state” is behind both AOC and the Dem dumpster fire in Virginia because it is disgusted with Democrats (for failing to deliver), wants to replace them with a new party.

Which is insane. Destroying the Democrat party would benefit only Republicans.

AOC’s Green New Deal “encapsulates everything Americans fear from government,” says Kim Strassel of the Wall Street Journal. If Republicans forged a fake Democratic bill (to show) “how bonkers the party is, they could not have done a better job,” she said.

Occasional-Cortex wouldn’t wittingly be a Judas goat. But those with large egos and small brains can be manipulated without their knowledge.

AOC’s 15 minutes are nearly over, Jack Wheeler predicted in last week’s HFR. Let’s do all we can to extend it.