SEND IN THE MARINE 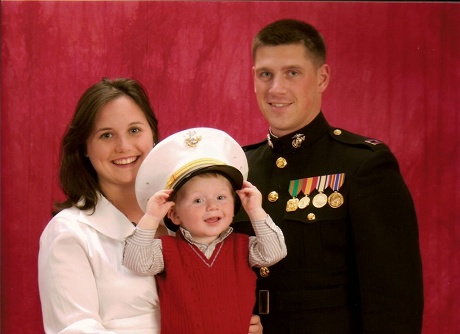 My decision to be a Democrat was never a decision. It was just expected of me. It was understood.

Born into a family of Democrats, my grandfather would often spend weekends talking to me about his respect for Franklin Roosevelt and his annoyance with President Reagan. I listened and absorbed, but was not yet ready to think critically about what I was told – or to decide for myself.

I love and miss my grandfather, but life has since taught me that thinking critically about the principles of the Democrat party is never encouraged because if you do, you have no choice but to leave – to walk away.

I was elected National President of the College Democrats of America in 1999, and now I’m a Republican candidate for U.S. Senate from Wisconsin in 2018. My campaign slogan is: Send In The Marine.

While the Democrats’ influence over my political philosophy defined a few years in my late teens and early twenties, that influence could not withstand the test of life and experience that made me a conservative as an adult.

In contrast with my time as a Democrat, my evolution to becoming a conservative Republican was a fully mindful and deliberate decision, based on my life experiences that left me with no other option.

While my choice was made clear to me through the experience of my marriage, the birth of my three children, my acceptance of Jesus Christ as my savior, my time fighting as a US Marine in two wars, and my experience in business since leaving the Marine Corps, it came at personal cost.

My parents have since turned their back on me, my wife, their grandchildren, and their extended family. Adding to this, they decided to make the maximum contribution to my Democrat opponent in my campaign for U.S. Senate in Wisconsin, an intentional personal blow that made headlines across the country.

It was deliberate – and it is a true representation of the intolerance of a political philosophy that stands on the false platform of tolerance.

I don’t enjoy talking about this highly personal experience, but as I see the #WalkAway movement gain momentum, I feel compelled to share my story.  As #WalkAway grows, conservatives need to reach out to those who were raised to believe in a Democrat Party and a liberal political philosophy that does nothing to make them more successful.

Many others who have decided to leave the Democrat Party have also likely paid a personal price for their decision. And others are not yet ready to leave because of the judgment and ridicule they will undoubtedly receive from other Democrats – whether family, friends, or co-workers.

Unfortunately, their fear is founded.

And that is why the #WalkAway movement is resonating. Because when you stop and ask yourself why you should be a Democrat, it is impossible to answer if you acknowledge the party’s hypocrisy, since it openly advocates for policies that encourage dependency and destroy opportunity for all of us.

As we look to the future, conservatives must aggressively reach out and welcome those who were not born into conservative families.

We must continue to champion the dignity of all human life, conserve and strategically invest our financial resources, and work to build a strong defense that secures our nation’s prosperity for all. This is how I will win my election against Tammy Baldwin in Wisconsin this November, and also how we will win the future of this nation.

During my Senate race, I have learned that some establishment Republican circles are reluctant to accept new members to our party.

Too many believe that they have a club that they control – and would like to keep it that way since it keeps them in power.  Those who demand that people be Republicans from birth in order to have a voice in the conservative movement would shrink, not grow our party.

And their short-sighted perspective on people’s ability to mature as they experience life would keep us from bringing new Republicans into the fold, like Donald Trump has done.  We need to push beyond these voices, and welcome new conservatives in order to secure our nation’s future.

If you’ve decided to #WalkAway or plan to, I encourage you to find strength in those who have already walked the path. Find strength in the principles of conservatism that are founded in faith, liberty, and the Constitution.

And find strength in those who have walked the path before you: President Ronald Reagan, President Donald Trump, Vice President Mike Pence, former U.S. Senator Phil Gramm – and so many others. Find strength in our decision to choose to believe in the human capacity to succeed when free, as you do the same.

TTP supports Kevin Nicholson for US Senate.  The Wisconsin Primary is August 14.  Please consider helping his campaign via https://nicholsonforsenate.com/.

Kevin Nicholson is a decorated Marine Corps veteran who served combat tours in both Iraq and Afghanistan. Following his time in the Marine Corps, he earned a joint degree at Harvard’s Kennedy School of Government (Master of Public Administration) and Dartmouth’s Tuck School of Business (Master of Business Administration). He then worked for McKinsey & Co., and now works for ghSmart as a business consultant. He is a first-time candidate in the Wisconsin Republican primary for U.S. Senate.