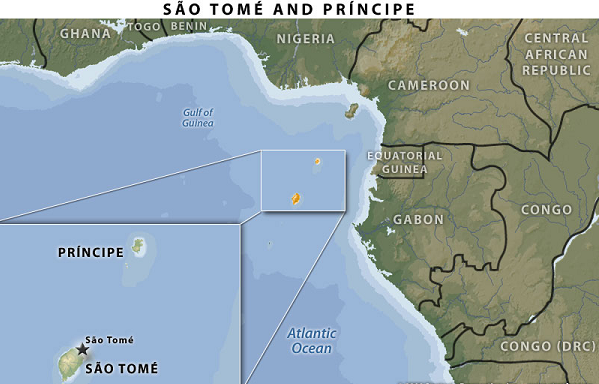 Ilheu do Bom-Bom, Principe Island, São Tomé & Principe, Africa.  I have come here, one of the remotest and least known countries in Africa, for two reasons.

First is to make a scientific pilgrimage. There’s a profound relevance to what happened here almost a century ago, and how science is perverted in America today. So we’ll begin there. We’ll get to the second reason later. (OK, here’s a hint — you won’t believe how magical this place is.  And yes, there are pictures.)

“Africa” and “science” are two words you don’t often see in combination.  Yet is was here that one of the most momentous experiments in the history of science took place.  Here is where the most famous scientist of modern times – Albert Einstein – became famous.  If it hadn’t been for what happened here, he’d have remained unknown.  Here’s the story.

When Einstein was 23 in 1902, the only job he could get was an Assistant Examiner at the Swiss Federal Office for Intellectual Property – the patent office – in Bern.  He worked there until 1909.  In 1905 – dubbed the annus mirabilis (miracle year) by science historians many years later – he completed his doctoral dissertation and got his Ph.D., and had four papers published in Annalen der Physik, a German physics journal.

The four annus mirabilis papers described: the photoelectric effect, showing that light is not a wave but a collection of discrete wave packets or photons; Brownian motion, providing the first empirical evidence for the reality of the atom; special relativity, showing that the speed of light is fixed, i.e. it is not relative to the movement of any observer nor that of whatever emits it; and mass-energy equivalence, with the equation that everybody knows, E=mc2.

All in one year.  Yet science advances grudgingly.  His assertions had to be checked.  Other scientists were making similar claims.  He became well known in German academia – but he still had to keep his job at the patent office.  Finally he got a lectureship in physics at Zurich University in 1909, then a professorship at a university in Prague in 1911, followed by one in Berlin in 1914.  He remained unknown to the world outside of the community of German science professors.

One of them was an astronomer named Erwin Finlay-Freundlich.  Einstein explained to him his latest theory on how to incorporate gravity into special relativity – to become known as general relativity – that if gravity warped or bent both space and time, the deflection would be twice that predicted by Newton.

Freundlich saw the way to test the theory would be with an eclipse.  There was this weird squiggle in the orbit of Mercury that Newton’s theory of gravity could not explain.  By comparing Mercury’s regular position to that behind the sun (during an eclipse so you could see it), you’d learn if it matched Einstein’s prediction.

There was an eclipse ideal for the measurement due to take place in Russia in August 1914.  As Freundlich arrived at the site, World War I broke out, and he was promptly thrown in prison as a German spy.  Unlucky for Freundlich (he was later released) but very lucky for Einstein.

Einstein, you see, had made an error in his calculations. If Freundlich had measured the eclipse, he would have disproved Einstein’s theory and the history of science would be different.  By 1915, Einstein had refined his calculations and determined that the exact deflection predicted by his theory was 1.73 arcseconds (an arcsecond is 1/60th of a minute, or 1/3,600th of a degree, or 1/1,296,000th of a circle – it’s small).

Meanwhile, one of the very few English scientists who knew about Einstein and had the math skills to understand him was Arthur Eddington, chairman of astronomy at Cambridge and secretary of the Royal Astronomical Society.  After the Great War ended in November 1918, he saw his chance.  An eclipse would be taking place the following May, and right on the Equator so “totality” (the time the moon completely silhouettes the sun) was a long 6½ minutes.

On February 9, 1919, Eddington took his measurements of stars and planets in the night sky at Oxford, England.  In April, he and his expedition team boarded a ship and sailed to Africa.  To here, the island of Príncipe (preen-zeh-pay).

The uninhabited islands of São Tomé and Príncipe were discovered and named by Portuguese in 1471.  100 years ago, the Portuguese colony was the world’s largest producer of cocoa.  One of the largest cocoa plantations (called roças) was Roça Sundy on Príncipe.  It was on the back terrace of the main house, overlooking the sea, that Eddington photographed the eclipse that changed history.

It was May 29, 1919, and it had rained all day.  Finally, at the last moment the sky cleared, and Eddington got two successful astrographic plates.  On November 6 at the Royal Astronomical Society in London, Eddington announced the results:  the stars and Mercury near the sun showed a deflection 1.61±0.30 arcseconds.  Einstein was confirmed.

The next day, November 7, the English-speaking world’s most widely read newspaper, The Times, ran the immortal headline across its front page: “Revolution in Science – New Theory of the Universe – Newtonian Ideas Overthrown.”  Einstein instantly became Einstein, the world’s most famous genius who replaced Newton as the Grand Master of the Universe.

And he never would have been, he wouldn’t be now, if not for Arthur Eddington getting those two astroplates as the sky cleared on this terrace at Roça Sundy on Príncipe: 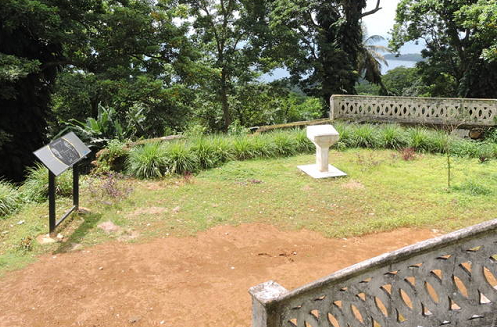 There’s an explanatory plaque about Eddington and Einstein: 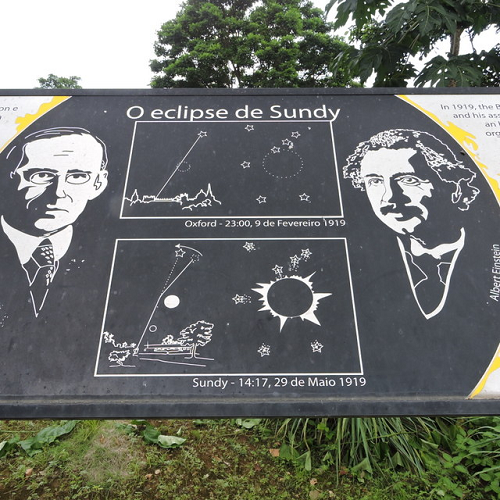 And a memorial to the history that was made here, which of course I had to commemorate: 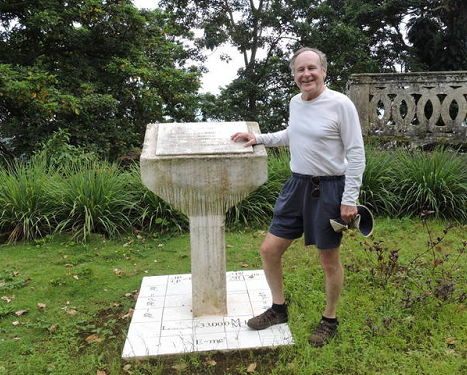 Great history and a great story, but why is it relevant to science today?  Because it shows the unbridgeable difference between real science and phony science, between how science is actually done and when it’s used as an excuse to gain government grants and a rationale for fascism.

That’s what Eddington did, that’s what innumerable scientists have done to test and replicate the predictions of Einstein’s General Theory.

And that is exactly and precisely what has not been done by Warmist scientists and their hypothesis of man-made global warming.  All Warmism is is GIGO – garbage data in, garbage predictions out in computer models that can’t accurately predict (duplicate) past weather much less the future’s, such as utterly failing to explain the current and still-running “pause” in global temperature rise.

As a result, due to their refusal to actually test for and attempt to empirically falsify their hypothesis, warmist scientists are more like witch doctors uttering mumbo-jumbo incantations, more like Judas selling out their profession for the silver of government grants, than real scientists with real scientific integrity.

Warmism, as the Left’s replacement for Marxism as the rationale for fascist power, is politicized science, a fraud and scam that’s no science at all.  And here on this lost unknown island off the coast of West Africa is a good place to understand why.

OK – onto the second reason why I’m here.

About ten years ago, my wife Rebel asked out of curiosity how many countries I had been to.  I didn’t know, never having added them up.  So I did, actual sovereign independent countries, and it came to some 140.  How many countries are there? she then asked.  I looked up the State Department list of Independent States – then at 195, now with South Sudan at 196 (193 UN Member States, plus Kosovo and the Vatican, with Taiwan cowardly listed as “Other” at the bottom).

Why don’t you try for them all?  Rebel then asked with a smile. Thus was my Every Country Project born.  Whenever I ran an adventure or expedition someplace, I’d plan a side trip to a country or two I hadn’t been to before.  Last month after Libya I was down to just one.  And here I am.

I can hardly believe it myself, but I have now been to every country in the world.

The world is a very big place, and it keeps getting bigger (similar to the adage, “The more I know the less I know”) – so it remains a place of bottomless fascination.  But this is the realization of a pretty cool life goal.  In addition to Rebel, I’d also like to thank Joel Wade, who provided a lot of encouragement for me along the way.

What’s so ironic, however, is that it took me going all over the world for years to find one of the most magical places in it.  It’s so idyllic you can’t put it into words, and really not even pictures.  Here are two.  You walk to a tiny island: 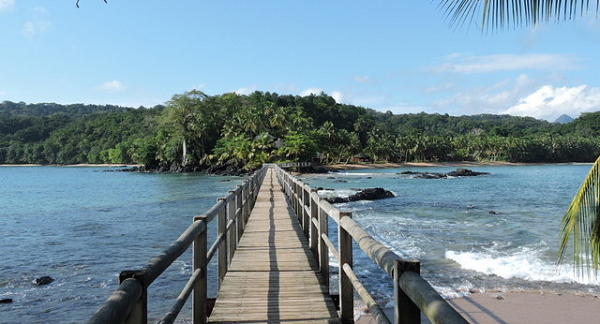 To a gorgeous beach: 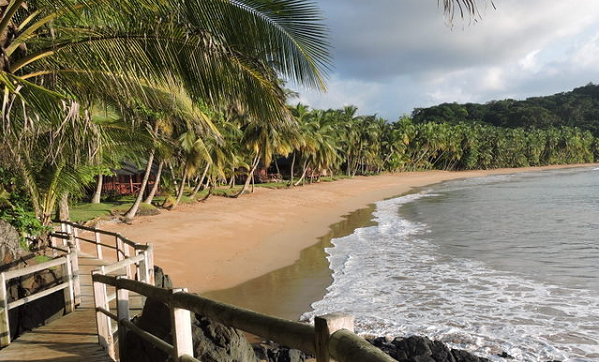 Then to a more secluded beach with your private bungalow: 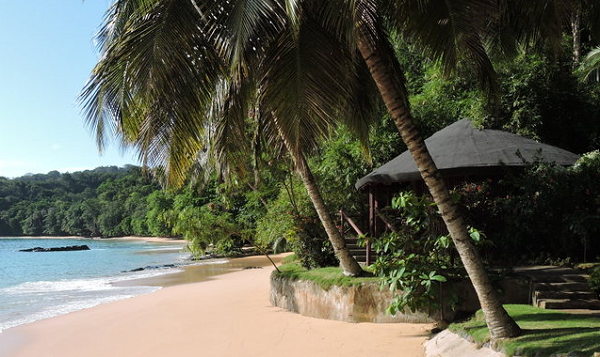 That’s where I am right now writing what you’re reading.

This is Bom Bom.  Here’s a story the London Financial Times did on it. I just wanted to get to that terrace at Roças Sundy and stumbled on to Bom Bom.  It’s so magical that I’ll bring some TTPers here in October.

This is Africa without anything that can harm you – nothing that can bite you, sting you, no sharks in the water, no predators in the jungle, the people are enchantingly friendly, there’s no crime.  There’s no place like it in all Africa.  It’s appropriate that the modern science of understanding the structure of the universe started here.

And it’s tragic that America’s science has been perverted by power-hungry politicians and lefties, dragging it down to an African witch doctor level.  It’s as if we have an African Witch Doctor in the White House.  Let’s pray that in 2016, we’ll get a real doctor.  Does Ben Carson come to mind?