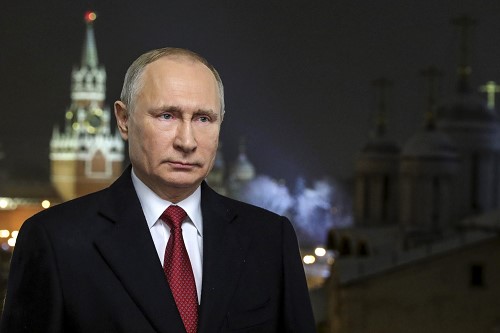 Unlike the year before, Russia entered 2019 with low expectations and deepening disappointment in its own faltering revival.

In contrast, the World Cup provided a focus for anticipation in 2018, and the presidential elections, pre-determined as the outcome was, raised hopes for increases of pensions and social benefits. Those hopes turned into frustration with the upping of the retirement age by five years.

The dull outlook for this coming year was aggravated by the bad omen of a natural gas explosion in Magnitogorsk on New Year’s Eve, which claimed 39 lives (Znak.com, January 11, 2019).

Meanwhile, the smoldering conflict with Ukraine no longer generates any “patriotic” mobilization. Plus, the finalization of autocephaly (self-governance) for the Ukrainian Orthodox Church with the tomos signed by the Ecumenical Patriarch of Constantinople on Orthodox Christmas Eve was sad news for many Russians (New Times, January 10, 2019).

Public attention and concerns are currently centered on domestic problems, however. As many as 57 percent of respondents foresee a probable looming economic crisis, while only 32 percent do not (Levada.ru, December 24, 2018).

President Vladimir Putin still insists on achieving an economic “breakthrough,” but his orders cannot alter the reality of stagnation. Illustratively, the World Bank revised its growth forecast for Russia downward to 1.5 percent; though, even that appears overly optimistic (RBC, January 9, 2019).

The United States government is portrayed as the main enforcer of sanctions. And the failure to cultivate high-level dialogue with the US has been one of the bitterest disappointments of 2018, particularly after the Helsinki summit in July.

US President Donald Trump’s seeming complete lack of interest in traditionally pivotal arms control matters should not have surprised Putin; but the White House’s decision to withdraw from the Intermediate-Range Nuclear Forces (INF) Treaty still caught him unprepared (Riddle, December 27, 2018).

Putin responded with more bragging and declared the test of the supersonic Avangard warhead as the best present for the Russians (Novaya Gazeta, January 9, 2019). Public enthusiasm was scant; whereas, worries about new sanctions are widespread (Newsru.com, January 11, 2019).

Putin was also surprised with the US decision to withdraw forces from Syria, a retreat which Moscow had long demanded but never expected to see. One immediate consequence was a spike in tensions when it comes to Russia’s uneasy partnership with Turkey (Gazeta.ru, December 28, 2018).

Moscow also has to figure out how to split the heavy bill for supporting Bashar al-Assad’s regime with Iran, and returns on this bad investment are by no means guaranteed (Russiancouncil.ru, December 26, 2018).

The broader geopolitical game with the US has always been the main driver of Russian policy in Syria, and now Moscow is left with local squabbles, unprofitable commitments and high risks.

On Russia’s vast eastern flank, the partnership with China is a key enterprise for the Kremlin—but it is not progressing particularly well.

Moscow anxiously watches the oscillations in the trade war between the US and China and finds no options that could answer its interests (Nezavisimaya Gazeta, December 25, 2018). The spasms of this conflict aggravate the slowdown of China’s economy, which in turn threatens to degrade Russia’s economy from stagnation to a full-blown recession.

The truces between Washington and Beijing, meanwhile, like the ongoing one, undercut Russia’s value as a key partner for China. Indeed, Beijing sees no reason to involve Moscow in the complicated intrigue around the dubious denuclearization of North Korea.

Instead, China is carefully orchestrating the next meeting between Trump and Kim Jong-un (Kommersant, January 10, 2019).

The question that has suddenly acquired sensational intensity during the seasonal political break in Russia is the apparently possible resolution of the long-deadlocked territorial dispute with Japan over the South Kurile Islands (Moscow Echo, January 10, 2019).

It was Japanese Prime Minister Shinzō Abe who gave a series of signals on a possible solution already in 2018, after the meeting with Putin at the G20 summit in Buenos Aires last December (Nezavisimaya Gazeta, December 9, 2018).

A sound political rationale certainly exists for the Kremlin to opt for a breakthrough in relations with Japan, which could reduce Russia’s growing dependency on China and produce a useful breach in the Western sanctions regime (Moscow Echo, January 6, 2019).

The outrage in Putin’s core “patriotic” electorate has, however, reached such a hysterical high that the risks involved in any compromise have become prohibitive (Rosbalt, January 10, 2019). The Russian foreign ministry announced that Japan “crudely distorted the essence of agreements” between Putin and Abe but stopped short of canceling the visit of Japanese Foreign Minister Tarō Kōno, who arrived to Moscow January 12 (Novaya Gazeta, January 10, 2019; TASS, January 12, 2019).

Moscow obviously wants to keep talking about the islands, expecting that promises of a probable deal might yield some tangible dividends and that Washington will start paying attention to this detail of the big geopolitical picture in the Asia Pacific.

The lack of political will to escape this impasse overlaps with the lack of resolution to manage the expensive Syrian intervention—and with the apparent absence of any good options to overcome the deadlock in the existentially important conflict with Ukraine.

Collectively, these hopeless entanglements leave Russia in a political limbo where its foreign policy choices are reduced to the symbolic dispatch of two strategic bombers to make a roundtrip to Venezuela (see EDM, December 13, 2018).

This predicament may appear less serious in comparison with the US government shutdown or the Brexit imbroglio in the United Kingdom. Russian propaganda certainly exploits these topics to the maximum noise level.

Nevertheless, Russia’s own population remains disheartened with the lack of positive domestic perspectives after four years of falling incomes.

For the elites, the five remaining years of Putin’s presidency mean only more arbitrary reshuffling, dirty infighting, and Western investigations of the origins of their evacuated fortunes. Putin may be content with this dull degeneration, but he is also increasingly prone to panic attacks and over-reactions to sudden challenges.