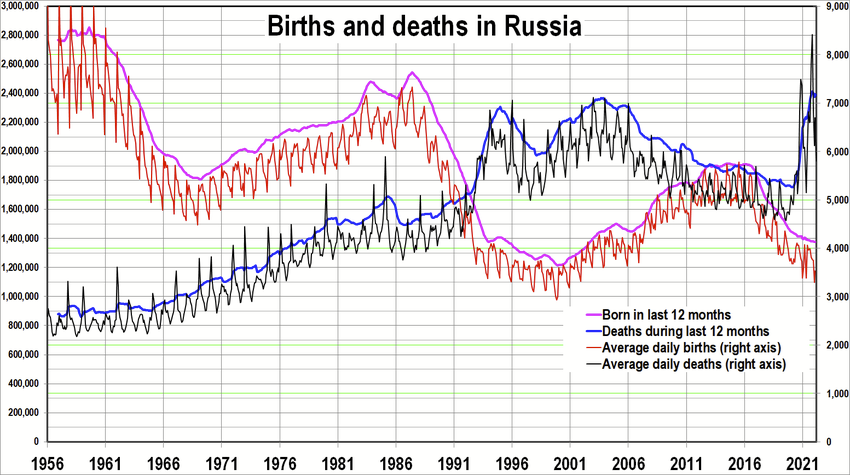 Most countries are slowly recovering from the disastrous demographic consequences of the COVID-19 pandemic, but Russia is not.

Instead, as new data shows, the Russian Federation has resumed its long-term demographic decline, a trend likely to intensify and profoundly affect not only the country’s self-image but also its prospects for economic recovery and fielding a large military.

The Kremlin is currently casting about for ways to limit or reverse this trend, but financial constraints—many of which arise from President Vladimir Putin’s war in Ukraine and ideological blinders affecting much of the Russian leadership—are preventing Moscow from making real progress, according to independent demographers.

Indeed, the problem has grown so large and is approaching so rapidly that many commentators are suggesting that the situation will soon be worse than during the disastrous 1990s (Nakanune.ru, August 9), and at least one analyst has declared the country will reach “a perfect storm” demographically by the end of this year or the beginning of next (Svoboda.org, August 9).

As a result, Russia runs the very real risk that this demographic crisis will soon become a political one as well.

Aleksey Raksha, an independent Russian demographer and perhaps the closest Russian counterpart to the late US expert Murray Feshbach, provides the most comprehensive discussion of these developments.

He relies exclusively on the first results of the latest census, which were released earlier this summer (Vedomosti.ru, April 8), and a broader selection of demographic data that Rosstat, the Russian government’s statistical arm, has now released (Rosstat.gov.ru, August 2022), making it far harder for his words to be dismissed.

The situation he outlines is devastating (Svoboda.org, August 9).

During the first five months of 2022, Russia’s population fell by 430,000, which far exceeded the figure for the same period in 2021 and one that points to another decline of more than one million people for 2022 as a whole. The 2021 figure reflects both the relationship of births and deaths among the permanent population and the size of migration flows.

Last year, in-migration partially compensated for the greater number of deaths as compared to births, but this year, it has not. Instead, increased out-migration has contributed to the total population decline.

The opening of the country to in-migration after the pandemic may lead to a slight improvement in the second half of 2022, but that will not be enough to compensate for the indigenous decline continuing into 2023 and throughout the coming decade (Osnmedia.ru, July 26).

Raksha points out he is not suggesting war losses or war-driven emigration are to blame. According to him, neither has been large enough to affect overall demographic figures, although they may hit certain age groups harder than others—though some observers strongly disagree and suggest that emigration is removing many women in prime child-bearing age cohorts from Russia (Yakutsk.ru, August 10).

The Russian demographer is also dismissive of those who say recent increases in death rates are the result of Putin’s healthcare optimization program, which has left many Russians without access to medical treatment (Nakanune.ru, April 7).

What has mattered, Raksha says, are three other factors: the continuing trend among Russians to have fewer children; the government’s reduction in pro-natalist policies, or even their outright cancellation given financial exigencies; and fears among many Russians about the future given economic problems and the war.

Not only are these driving down the fertility rate to lows not seen in peacetime before, but they are also combining to reduce the future number of women who might bear children in the future, thus limiting the ability of the country to escape these problems. The number in this cohort is now declining at a rate of 3 percent annually.

Given that fertility rates are now well below replacement levels—it has fallen below 1.5 children per woman, far below the 2.2 children needed to maintain the population at existing levels—Russia’s total population will decline.

In truth, unless immigration swells to politically dangerous levels, Moscow invests far more in promoting larger families than simply restoring the Soviet-era practice of awarding “hero mother status” to women with large families, or the Kremlin occupies the territory of some of its neighbors and absorbs their populations, this outlook will not change.

In pointing to the third possibility, Raksha notes it is often forgotten that Moscow now counts the population of Ukraine’s Crimea, which it annexed in 2014, when it talks about population increases since the 2010 census.

The independent demographer also points to another statistical quirk that Moscow is exploiting to make its reported figures look better than they are, and one that ignores why any current improvement will not last.

During the first five months of 2022, mortality rates declined slightly, but that almost certainly reflects the fact that many who might have survived into 2022 without a pandemic died in 2021 or 2020 before from COVID-19.

If one takes that into consideration, it means Russia will not be able to count on a significant decline in death rates in the future. Instead, it may face an increase, especially if healthcare cannot keep up with the problems of an aging population and the possible spread of new diseases.

That in turn may pull down life expectancies given that additional improvements in infant and child mortality, which have the greatest impact on death rates, appear unlikely, as those figures have become extremely low (Ach.gov.ru, 2020; Datatopics.worldbank.org, accessed August 16).

Many Russians see three other demographic trends as incredibly threatening.

First, new census data shows that the only regions naturally growing in number are non-Russian ones. All predominantly ethnic Russian areas are declining; something that means the country is becoming ever less ethnically Russian (Capost.media, April 5, 2021).

Second, relative to other countries, a large share of deaths in Russia are among its working-age males, hurting the economy and birth rates (Finanz.ru, February 16, 2021).

Third, and certainly most immediately important to Putin, the number of men of prime draft age is falling rapidly.

According to one estimate, maintaining the Russian army at its current size through 2032 will require Moscow to increase the share of men enlisted from the current rate of 6.31 percent to 8.01 percent down the road.

While this could limit military options, it will beyond a doubt hit the economy, which will lack new workers unless migration increases radically. This is an unattractive option as far as many Russians are concerned (Versia.ru, February 22, 2021).

It is often wisely said that demography is destiny but only in the long term. In Russia’s case, that term may be far shorter than anyone might have expected.