World War II ended in Europe with Hitler blowing his brains out in his Berlin bunker on April 30, 1945. Slightly over one week later, in Berlin on May 8, the commanding officers of the Wermacht signed the German Instrument of Unconditional Surrender to the Allied Forces. Signed at 9:20pm, it ordered all German forces to cease operations at 11:01pm.

Thus, VE or Victory in Europe Day is celebrated across all Europe on May 8, which was yesterday.  However, since Moscow is an hour ahead of Berlin, Stalin declared WWII Victory Day for the Soviet Union to be May 9, as the surrender took effect one minute past midnight Moscow time.

Once the Soviet Union ceased to exist in December 1991, May 9 became Russia’s Victory Day – and so it was today, albeit with the glaring contradiction pointed out by the Free World’s current leader Volodymyr Zelensky, that Russia was now engaged in a war of Fascist-Nazi genocidal extermination against Ukraine.

And with the even more glaring fact that it was a war it was badly losing.

Which is why, in so many places around the world, there were protests and demonstrations today calling it Russian Shame Day – as in New York City’s Times Square: 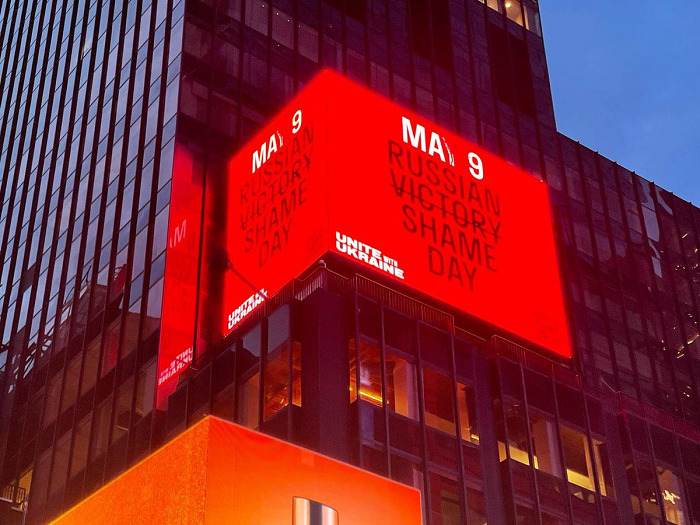 That is why the leaders of the G7 jointly announced on VE Day that “Putin’s war on Ukraine has brought shame on Russia,” and issued new sanctions to achieve the “systematic and methodical removal of Russia from the global financial and economic system.” 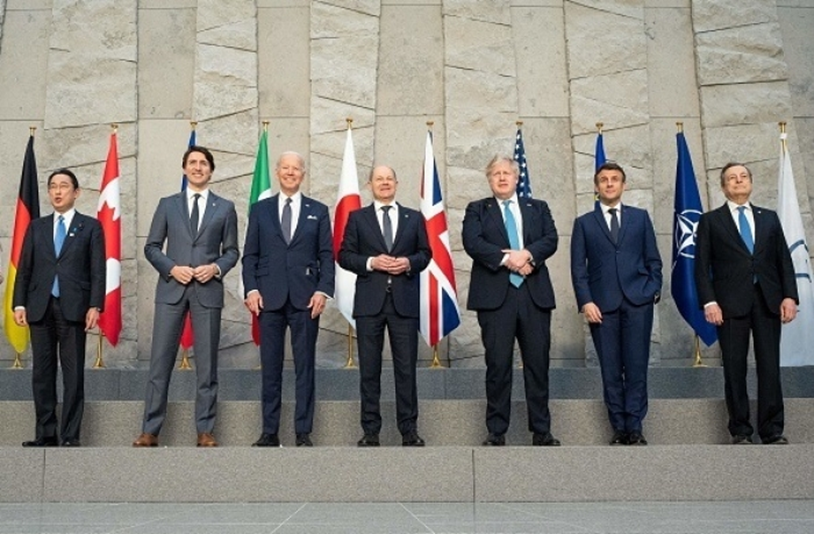 And why, when Russia’s Ambassador to Poland Sergey Andreev had the foolish effrontery to attempt to lay a wreath of flowers at a Soviet soldiers memorial in Warsaw today, Poles were so enraged they doused him with red paint:

One key reason for this global torrent of disgust, ridicule, and hatred for Putin’s Russia now is the opposite of the adage, “Nothing succeeds like success,” which is: “Nothing fails like failure.”

Today, everyone was expecting Putin’s Red Square Victory Day speech to be one of fire, of bombastic anger and doomsday threats of nuclear Armageddon.   Instead, it was a short 11-minute long damp squib phoned in with no enthusiasm, filled with the whiney complaints of a loser.  Not a whisper of a hint of “Let me win in Ukraine or I’ll nuke you all” bluster.  Read the transcript in the link above and see for yourself.

As Zelensky’s predecessor, Petr Poroshenko, explained to Sky News, Putin today delivered not a message of victory but of defeat:

Putin has exposed the vaunted Russian military to be a shambolic farce, one of nauseating barbaric depravity and laughably incompetent at the same time.  And has revealed the soldiers of Ukraine to be the most heroic, smartest, cleverest, fiercest fighters on the planet.

Plus they and the people of Ukraine have been blessed by their very own Winston Churchill inspiring them to victory, capable of not only uniting all Ukrainians together into true and bonded nationhood, but of uniting all of Europe and North America into all-out support with an astonishingly massive array of real weaponry and assistance.

Folks, this is genuine history in the making right before our eyes.  The West is losing its fear of the Russian Bear and gaining confidence in its civilization at last and again.

As a result, Putin is already receding in history’s rear view mirror, while Russia itself is ever more likely to break apart in pieces as did the Soviet Union.

Today is truly Russia’s Day of Shame – as will be most every day from now on for a long time to come.