2 The Point News » Guest Authors » Members Only » RISING ABOVE SENTIMENTALITY

On Tuesday (10/05), I gave a lecture for students at Magdalen College of the Liberal Arts in a course I believe is unique in the nation. It wasn’t so much an art history lecture as an American history lecture, using art—or rather a lecture about what Americans believed about themselves, for better and for worse, as manifest in works of art.

I’d like to discuss two of them here—two of them that are now inconceivable, not just because the practical necessities they show are no longer in play, but because the culture they describe, culture as a spiritual reality, embodying the high aspirations of the human soul, is gone. What has taken its place is another matter.

The first is Winslow Homer’s “Huntsman with Dogs” (1891). The scene is somewhere in the Adirondack Mountains. We can tell that young man has been at work here, hard work—in the foreground, we see the sawed-off stumps of a couple of large trees, probably oak, and the hill behind the hunter looks as if it has been cleared for lumber.

The hunter himself, though, dominates the picture. He is hardly more than a boy, as we can tell from his face, though he is broad-shouldered, and he wears a man’s trousers and boots. Clearly he has spent most of his waking hours outdoors. He has planted one foot on a stump, as he looks forward, brows knit, and a cast of his jaw that suggests he is thinking, coming up with strategy, perhaps seeing some game in the distance.

He carries his rifle easily over one shoulder, bracing it with his left hand, and on his back are slung the trophies of what has evidently been a successful hunt. His right hand by his side holds the antlers of a deer. To his left and right, leaping, barking, and rejoicing, are two of man’s best friends—hound dogs.

The boy is self-reliant, without needing to make a fetish of it. It is simply the way things must be. He is fit to roam the mountains, far from civilization, to hunt what he needs, either for food, or for the hides to sell. The work is difficult—we are in the Adirondacks, after all—but the boy appears, in a grave way, to enjoy the difficulty. He seems to be the sort who is always thinking.

I think that Homer has caught something essential to the American soul, or at least to American aspirations: the young man here is no braggart, but nothing daunts him, either. Is there a problem? He will tackle it. What are his feelings? He doesn’t appear to share in the joy of the dogs. His feelings are bound up with the satisfaction of work well done. He is not thinking about himself. He is thinking about something yet to come.

My point is not that we don’t have boys scouring the Adirondacks for deer anymore. It is that the type of American here is gone.

Imagine trying to explain to such a person what “triggering” now means. Expect sadness from him, and pity—pity, which is often just the glimmer on a sea of contempt.

Imagine trying to explain to him that people are no longer considered capable of managing the ordinary things in life, without professional help and state oversight. “Better, then, to live with the Indians,” he might say, and I think he would be right about that. It would be human.

Think of Ken Kesey’s Indian, looking forward to fishing in the Dalles with his regulation-breaking buddies, in One Flew Over the Cuckoo’s Nest.

Which brings me to the second work, Frederic Remington’s The Emigrants (1903). 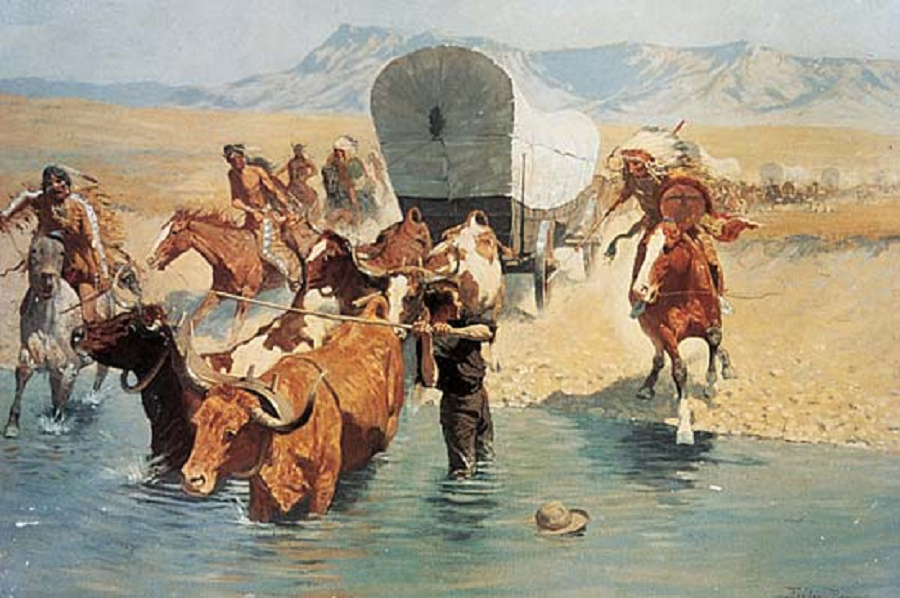 Remington was the great artist of American pioneers and soldiers out west, and of the Indians they fought, or traded with, or honored. I choose this painting because it is the work of a mature human being, with broad and deep sentiments, for other mature human beings.

Remington gives us a line of covered wagons receding into the background, and it is significant, I believe, that we do not see the end of the line. There is no end; the wagons come, more and more, like a river. They are more powerful, by far, than is the shallow river they are about to cross.

The foreground is dominated by several Indians on horseback, on either side of the lead wagon, and a young man trying to goad his oxen on to cross the water. But his attention has been diverted to the Indians, and he wields the goad as if in self-defense, while his hat has fallen into the river. He is dressed in shirt and trousers; the Indians, in headdresses, with a variety of accoutrements.

It is clear the Indians are threatened by the wagons, though it does not appear at the moment that they will go so far as to wage open war. Remington is sympathetic to them; in other paintings of his, sympathy becomes admiration. Yet the movement westward is—was—inevitable. Rich land lay untilled; then farmers must come to till it. Rich veins of ore—gold, silver, copper—lay untapped; then miners must come to open the veins.

Is it willed by God? Remington doesn’t touch that question at all. Is it fraught with human conflict? Yes, absolutely. Could the conflict have been averted, had the emigrants or the Indians been more virtuous? Ah, perhaps if they rode on unicorns instead of horses. In large human movements, we must take human beings as the generality are, not as their saints may be.

The Remington painting is not sentimental, as almost all of our politics is now. By that I mean that our politics is less about thought or pragmatic planning than about feeling, and less about genuine universal human feeling than about its self-swindling substitute, sentimentality, a ginned-up mimic of feeling; and the louder you cry the sentiment up, the less genuine and the more shallow or delusive it is likely to be.

Millions of people are offended, or say they are, when in reality they are mostly idle. Millions of people say they love X, when really they only hate Y, and at that, it is not likely to be a full-blooded richly human hate, something with teeth and muscle in it, but an irritable resentment, again made worse by the sentimentalists not having enough to do.

I understand that at its best, politics is going to be prone to what I have described, and that some of the art in any age will not rise above sentimentality. But we used to have more and far better than we have now.  We need it again.

Anthony Esolen is a professor and writer in residence at Magdalen College of the Liberal Arts, in Warner, New Hampshire. Dr. Esolen is the author of many books, including The Politically Incorrect Guide to Western Civilization; Ten Ways to Destroy the Imagination of Your Child and Reflections on the Christian Life. His most recent books are Sex and the Unreal City: The Demolition of the Western Mind; and No Apologies: Why Civilization Depends on the Strength of Men.