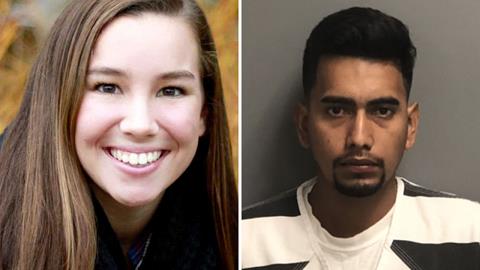 Democrats say “love trumps hate,” and they’re not wrong—at least, not for the reasons they think.

Donald Trump won in 2016 precisely because love trumps hate—the love of a parent for her children; the love of people for their community; and the proper love citizens have for their country.

Those people—62 million Americans, give or take, and counting—are tired of seeing their love undermined and negated by years of hateful Democrat Party policies. That’s the truth of the matter.

In politics, the human element is often overlooked. People focus on data points about unemployment and GDP growth or statistics about the cost of the military, which is not to be ignored. But what they forget is why policies come to be in the first place: to help people.

Trump’s entire election was centered around bringing a degree of humanity back to our technocratic politics. That’s it. It’s really no more complicated than that. One issue that Trump understood intuitively better than his opponents was immigration—the human costs and the burden for American communities to handle the influx of illegal immigration over the years.

In 2015, the Kate Steinle case drove that point home. Steinle was murdered by an illegal immigrant carrying a gun while walking on the famous San Francisco Embarcadero with her father. 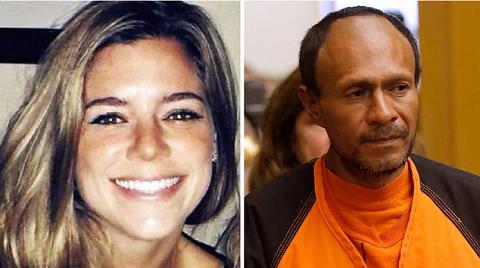 Her killer was acquitted. And the illegal immigration problem has persisted. Now America has been given another terrible reminder of the dangers of the country’s current immigration policy.

Over the past few weeks, a missing persons case involving a 20-year-old University of Iowa student, Mollie Tibbetts, has been in the news daily. While taking a run in the evening in July, the Iowa student did not come back home.

A month-long search involving scores of volunteers ensued. A wide-ranging investigation scoured the Iowa countryside for evidence of her fate. Mollie’s parents—the people who had nursed her, who had sacrificed to provide a better life than they had for her, who raised her to be a good and decent person—now have to plan for their daughter’s funeral.

And why did this happen? Because  Mollie was murdered by an illegal alient—24-year-old Cristhian Bahena Rivera. Not only is Rivera an illegal alien but he had been in the country illegally for seven years. (Note: the Iowa Arrest Warrant for Rivera spells his first name as “Cristhian,” not “Christian.”

As Senator Tom Cotton (R-AR) notes, “Mollie would be alive if our government had taken immigration enforcement seriously years ago.”

As does the Governor of Iowa: 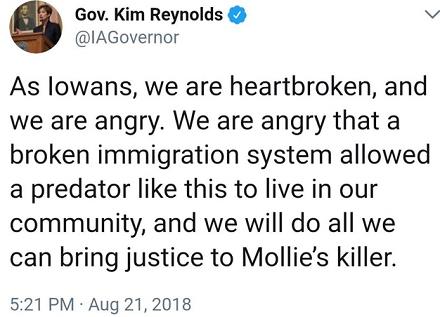 Authorities knew about Rivera for almost the entire time he was in the country illegally, according to the New York Post. Mollie’s fate is that of Kate Steinle’s. Sadder still is the fact that both Steinle and Tibbetts’ fates were no different than the countless other young people—of all races and religions—who’ve been taken by the reckless and murderous actions of people who should not have been in the country in the first place.

As Angel Moms ask, “How many more will it take for all of America to wake up and get behind President Trump to secure our borders and clean up our country?”

The Democrats believe that the Blue Wave is coming in November. They believe that by making 2018 a referendum on the low character of Donald Trump,  they will return to power (and systematically vote to remove Trump from office based on the fabricated narrative that he’s a Russian agent).

Let the memory of young Mollie Tibbetts, of her family, and of all the people who’ve been victims of illegal immigration remember just what’s at stake in November.

President Trump is correct when he warns that there will be no Wall or any meaningful reform of our dysfunctional immigration system if the Democrats win. If, however, Americans vote for the right Republicans, real change will happen. It already has with the passage of the president’s travel moratorium. 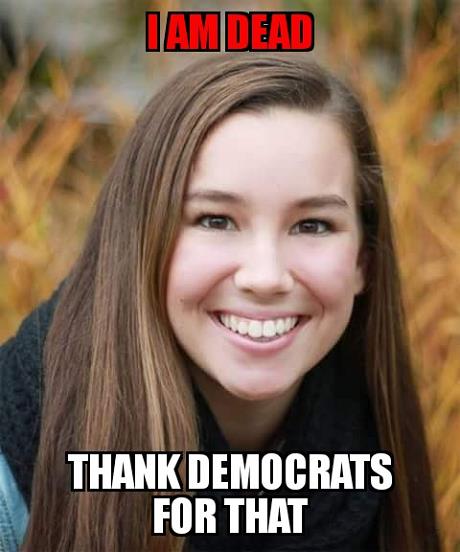