Have we reached Peak Corporate Cave-In?

It kind of looks like it – Trader Joe’s has decided to reverse course and not change all the brand labels of its products to satisfy the wokeness demands of a tiny, largely white, racism-parsing left-wing mob. Here’s their statement:

“To Our Valued Customers:

In light of recent feedback and attention we’ve received about our product naming, we have some things we’d like to say to clarify our approach.

A few weeks ago, an online petition was launched calling on us to “remove racist packaging from [our] products.” Following were inaccurate reports that the petition prompted us to take action. We want to be clear: we disagree that any of these labels are racist. We do not make decisions based on petitions.

We make decisions based on what customers purchase, as well as the feedback we receive from our customers and Crew Members. If we feel there is need for change, we do not hesitate to take action.

Decades ago, our Buying Team started using product names, like Trader Giotto’s, Trader José’s, Trader Ming’s, etc. We thought then—and still do—that this naming of products could be fun and show appreciation for other cultures.

for example, we named our Mexican beer “Trader José Premium” and a couple guacamole products are called “Avocado’s Number” in a kitschy reference to a mathematical theory.  These products have been really popular with our customers, including some budding mathematicians.

We constantly reevaluate what we are doing to ensure it makes sense for our business and aligns with customers’ expectations. A couple years ago we asked our Buying Team to review all our products to see if we needed to update any older packages, and also see if the associated brands developed years ago needed to be refreshed. We found that some of the older names or products just weren’t connecting or selling very well; so, they were discontinued. It’s kind of what we do.

Recently we have heard from many customers reaffirming that these name variations are largely viewed in exactly the way they were intended­—as an attempt to have fun with our product marketing. We continue our ongoing evaluation, and those products that resonate with our customers and sell well will remain on our shelves.

Trader Joe’s has been a unique, fun and neighborly place to shop for over 50 years. We look forward to taking care of our wonderful customers for many future decades.”

That’s a big change from all the cancel culture that’s taking every minority face off food-label packaging, from Mrs. Butterworth, to the Cream of Wheat man, to Aunt Jemima, to Eskimo Pies, to the Land O’Lakes Indian maiden and more, leaving just the faces of whites on the packages.

Trader Jose, Trader Ming, Arabian Joe, Maitre Pierre, Trader Giotto, Trader Joe San and the rest, though, look like they might just stay, just as their customers like.

Reading through the lines of the corporate statement tells us a lot of just why, and is it commendable:

“We want to be clear: we disagree that any of these labels are racist.”

Glad they got that out of the way, nice to see a full frontal from what had been a bunch of corporate jellyfish.

“We make decisions based on what customers purchase, as well as the feedback we receive from our customers and Crew Members.”

“Recently we have heard from many customers reaffirming that these name variations are largely viewed in exactly the way they were intended­—as an attempt to have fun with our product marketing.”

Right — and it’s scaring them straight. They must have been flooded with angry customers disgusted at seeing their beloved company cave in to political correctness. What next, replacing all the spicy food with bland pabulum, to keep all the cultural appropriation out and satisfy the far-left mob? Make the high-chair spoon throwers happy? Obviously, the customers rebelled.

“We make decisions based on what customers purchase,”

“those products that resonate with our customers and sell well will remain on our shelves”.

Nice to see a company remember what it is — no Silicon Valley/Portland/Seattle-style claptrap about ‘changing the world’ from them. If something’s profitable, they keep their customers happy. And what’s more, customers agree.

Here are some very recent comments that went onto the Change.org petition to force the company to take its cutesy ethnic names off its products: 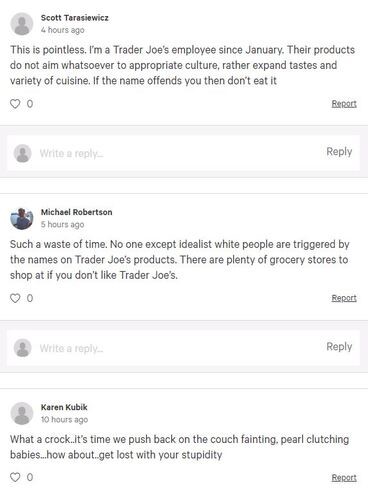 Trader Joe’s must have taken a look at who was behind the petition and decided it was total bee ess. Who’s behind it? A rich little wokester white high school teenager no doubt eager to please her teachers and college admissions committees named Briones Bedell. Rest assured she knows nothing about racism, she’s just another Karen looking to ‘atone.’

Second, she drew very few signatures to her petition, a miserable 4,900 at last count, falling short of her 5,000 goal. This, despite fawning media profiles linked on her Twitter feed and copious glowing press. Seriously, she got less than 5,000 signatures and a lot of people trolling her. That doesn’t sound like the person who’s earned a right to push around big corporations, except that she knows they’ll let her. Maybe not now.

The remark by the Trader Joe’s employee above tells the real story – that Trader Joe’s introduces Americans to a wonderful variety of unique food they might not ever taste were there no Trader Joe’s. It’s cultural sharing in the best sense of the word and it delights millions and millions.

Who would have tasted Alsace Tarte Tatin or Dukkah spice (please, please Trader Joe’s BRING IT BACK), or Mandarin orange chicken, the top-selling item in the store, or Salvadoran coffee, or Indian Palak Paneer, or Thai eggplant, or Peruvian chimichurri rice without it?

So many tasty things to be found there, and tons of things that adapt to special diets, love the sugar-free sliced turkey they stock, try to find it elsewhere. Bottom line is that Trader Joe’s introduces American palates to new kinds of foods and that’s a heckuva lot better than mushed blandness, the same no matter where you go, all designed for high-chair wokester tastes.

What this sniveling ignorant little white teenager Miss Bedell doesn’t get is there’s a difference between appropriation and appreciation, as a far smarter and more brilliant black teenager has explained exquisitely here:

Morgan Bullock is an African-American Irish dancer from Richmond, Virginia

After a TikTok video of her lightning-footed jigs went viral, she was accused of “cultural appropriation.”

Q: You were misappropriating the Irish dancing culture?

A: I mean, my understanding of the term is that it means, when you’re taking something from another culture, claiming it as your own without recognizing where it comes from, and that couldn’t be further from what I’m doing. It’s important for people to recognize that there’s a difference between appropriation and appreciation.

(The lovely video clip is edifying and well worth the time to watch). Here’s more backstory to that.

So – it just could be the good guys are winning now. Enjoying another culture is not racism, it’s white Karenism, done by wokester teens with absolutely nothing intelligent to say. Glad Trader Joe’s woke up and smelled the coffee.