2 The Point News » Guest Authors » Members Only » RAGE, RAGE AGAINST THE DYING OF THE DREAM

RAGE, RAGE AGAINST THE DYING OF THE DREAM 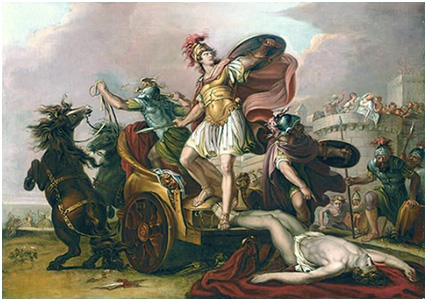 Homer’s Muse sings of the rage of Achilles, brought forth from his tent by the death of his friend Patroclus to engage the Trojan hero, Hector, in mortal combat.

But Achilles’ anger solves nothing; although he kills Hector, he then desecrates the body by dragging it around the walls of Troy, thus violating the laws of warfare and sealing his own fate.

His determination to avenge his friend thus becomes “the accursed rage that brought great suffering to the Achaeans.” In the end, it’s not the rage of Achilles that wins the war for the Greeks, but the trickery of Odysseus that finagles the wooden horse inside the impregnable gates of Ilium.

We are witnessing a similar self-destructive rage today: the rage of the American Left against the Trump Administration in general and the president in particular.

An explosion of frustrated, impotent (but still dangerous) anger that has given up all pretense of genuine protest—against the results of a duly constituted American election, let us remember—and has devolved instead into a toddler’s extended tantrum. It bears the hallmarks of one of the most unseemly displays in American political history.

It’s being conducted in the halls of Congress, where the Democrats have at last dropped all pretense of civility and shown the voters their true, foam-flecked faces.

It’s being waged in the media, where the ladies and gentlemen of the press, such as they are, have thrown over journalistic practices that served the profession well over the past century or so, and now regard malicious gossip and news as one and the same thing.

Most ominously, it is taking place in the streets where, over the past year, Republican congressmen and Trump supporters have been shot, attacked with a switchblade knife (still not reported by CNN as of this writing), clubbed with a bicycle lock, had their vehicles and offices vandalized and set on fire; even the president’s star on the Hollywood Walk of Fame was destroyed.

The masked fascist thugs who ludicrously call themselves “Antifa” routinely attack public gatherings, and Left wingers sporting “Say No to Hate” t-shirts scream at the sky at the very thought of Trump and his policies.

Not since the 1960s have we witnessed such a public breakdown in moral and psychological order.

Socialism is the Goal
But even back then, there was the fig leaf of “protest.” The students who assaulted the Democrat National Convention in 1968 could pretend they were protesting the Vietnam War, and the complicity of the Johnson Administration’s vice president, Hubert Humphrey, in it.

The riots in major American cities in this period could be attributed to black Americans’ frustration over police practices, and their impatience with the slow pace of social change. And everybody still feigned a belief in America—imperfect, perhaps, but still capable of self-reflection and a determination to do better.

Today, not so much. Socialism is now openly a goal of the political Left, mostly mouthed by small children at the behest of their red-diaper baby grandparents.

Calls for violent revolution are treated by the press as perfectly reasonable reactions to the 2016 election, and of course #TheResistance has only been emboldened by its media cheering section as it seeks to plant the notion, by means most foul, that they “wuz robbed” of an election they thought they had in the bag.

What besides a profound, educationally inculcated, and emotionally juvenile hatred for the United States motivates them to such paroxysms of hysteria?

For the fastidious collaborationists known as the #NeverTrumpumpkins, they are personally offended by the president’s sometimes boorish behavior and have had their skirts ruffled by his flouting of what they consider to be the sacred rules, precepts, and preenciples of “The Conservative Movement.”

In reality, however, most of them are simply returning to their roots as Democrats, their brief sojourn on the Right more an alliance of convenience than one of genuine principles.

On the broader Left, their rage, like that of Achilles, has to do with death—the death of the “dream” Ted Kennedy articulated when, his personal reverie of becoming president of the United States having come a cropper, he delivered himself of these lines: “For me, a few hours ago, this campaign came to an end. For all those whose cares have been our concern, the work goes on, the cause endures, the hope still lives, and the dream shall never die.”

But the “dream”—a nightmare to most real Americans—is dying, and they know it.

The Last Flicker of Consciousness
It was a dream of fascist statist control, run by experts in Washington, and brooking only token opposition from the Vichycons across the aisle.

It was a dream of “fundamental transformation” of the most intimate and personal areas of our lives, including the very nature of sex.

It was a New Luddite dream of zero carbon emissions, technological water-treading (except in pacifying personal electronics), and the destruction of national sovereignty.

The Obama Administration represented the high-water mark of the leftist floodtide, at least during this generation’s flood season.

They thought that the eight years of misery America had already endured under the Punahou Kid’s malignant stewardship would be capped and cemented by the four-to-eight-year reign of the Dowager Empress of Chappaqua, after which the deplorable country formerly known as “America” would have no hope of recovery.

And when it didn’t happen, when 63 million of their formerly fellow Americans rose up and stopped Hillary cold in the Electoral College (and the popular vote save for millions of illegal alien votes in California), they lost their minds in an Achillean rage that continues to this moment and is, if anything, intensifying as it reaches its climactic breakdown.

In his concession speech at the 1980 convention Ted Kennedy, the Lion of the Senate who left a girl to die in the back seat of his car at Chappaquiddick, quoted from a poem by Tennyson, which just so happens to have been “Ulysses.”  The lines ran:

I am a part of all that I have met
Though much is taken, much abides
That which we are, we are–
One equal temper of heroic hearts
Strong in will
To strive, to seek, to find, and not to yield.

He might have done better to quote the lines that come just before:

Come, my friends,
‘Tis not too late to seek a newer world.
Push off, and sitting well in order smite
The sounding furrows; for my purpose holds
To sail beyond the sunset, and the baths
Of all the western stars, until I die.
It may be that the gulfs will wash us down;
It may be we shall touch the Happy Isles,
And see the great Achilles, whom we knew.

The great Achilles could tell them a thing or two about rage, and where it gets you when passion is unchecked by reason.

Instead, they seem hell-bent on rage eternal, preferring to heed Dylan Thomas’s exhortation not to go gentle into that good night, but instead to rage, rage, against the dying of the light: the last flicker of consciousness they mistook for a dream before darkness closed in all around them.