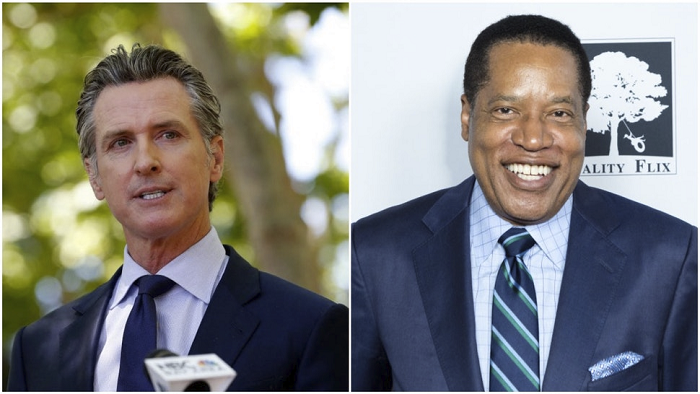 Let’s start with Wikipedia’s List of California Governors. Scroll down the photo of each, from Peter Burnett in 1849 to Gavin Gruesome today, and notice that every single one for the last 172 years has been a white man.

California Democrats had the chance to correct this yesterday (9/14), and of course they blew it, believing their lily-white living-example-of-white-privilege governor, who told them a vote for his black opponent was a vote for white supremacy..

Condolences to my many conservative friends in California. They’ve been Charlie Brown trying to kick the football while the Democrats play Lucy. It’s no use exhorting my friends there to get out, even though I really wish they would. I know they would love living in America.

California mesmerizes people though, especially Southern California. The perfect weather and the beaches help you block out the politics and the fact that lunch always costs at least $100. It’s a sort of lifestyle-induced Stockholm Syndrome that makes conservatives stay. I did it for almost 25 years, all the time believing that I would eventually help bring about some change.

Lesson. Learned. Despite being one of the most psychotic authoritarian COVID governors in America and an all-around awful human being, Gavin Newsom will keep his job.

One bottom line is that over half of  California voters are too stupid to recall Newsom. Another is that Democrats are the real racists in this country. That’s the story here.

The media will frame this as a rebuke of Trump because that’s what Newsom and his ilk babbled on about for the last two weeks. Not only is Larry Elder a Trump Republican, as the left media keeps saying, he is also a black Trump Republican, and the “black” part is what really drove Democrats to pull Newsom out of the polling abyss that he was in a few months ago.

Black Republicans give Democrats night sweats. They don’t view the electorate as a collection of individuals, they only see racial, ethnic, and gender voting blocs. It’s a delicate ecosystem of lies and false promises that can be thrown completely out of balance if members of one of those blocs deviate from the hive mind and begin voting based on their self-interest.

It wasn’t the thought of a Trump Republican becoming governor that got Democrats to ignore what a craptastic governor Newsom has been and vote to keep him, it was the fear of a black Republican who violates their bigoted, narrow worldview.

So todays question: Is California so far gone that getting rid of Newsom wouldn’t save it?  Put it this way:

Would the initial thrill of deposing Newsom have soon yielded to the harsh reality that Republican support for Elder in Sacramento would have been more impotent than a male feminist drum circle that spends weekends chanting pronoun preferences?

My once-beloved California is going to continue to toilet-swirl into an un-American progressive sewer as long as the public sector labor unions — especially the evil teachers’ unions — dominate the state.

They make it possible for Gavin Newsom to stay in office, and continue to singlehandedly tank ballot initiatives that conservative Californians support. Those all die hideous deaths because union money buries them with false advertising and sways voters who are too stupid to  know any better.

California is a cautionary tale of just how quickly the far-left can destroy things. It’s a sickness that spreads quickly. We need to lock it down and treat it like a progressive leper colony in order to contain the disease.