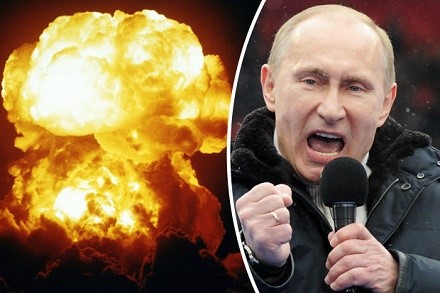 Moscow’s dispatch of strategic bombers and heavy transport planes to Venezuela last week (12/10), and its subsequent obliging Washington to remove them only four days later (12/14), highlights both what has and has not changed in the in the “new cold war” between Russia and the United States.

Indeed, as Moscow-based military expert Aleksandr Golts argues, the appearance of two Russian Tu-160s in Latin America this week highlighted that the present-day hostility between Russia and the US could far more easily go “hot” than was the case in the “old” Cold War (Otkrytyye Media, 12/12).

Golts argues that, in order to achieve Russia’s goal of parity with the US, President Vladimir Putin must demonstrate his willingness to threaten the use of Moscow’s nuclear arsenal.

After all, given the weakness of the Russian Federation today compared to the strength of the Soviet Union in the past, Russia’s nuclear stockpile remains the only resource Putin has that allows him to claim any kind of superpower status for his country.

This time, Moscow’s signaled willingness to threaten nuclear war did not lead to open conflict but rather to a Russian drawback. However, in a future in which Putin is likely to repeat such hostile behavior, there is a risk that his moves could lead to miscalculation and war.

That conclusion is justified, Golts asserts, because Putin’s vision of the world, one allegedly shared by a majority of Russians, is that everything that happens in smaller and militarily weaker countries is the work of Western special services and thus must be countered forcefully.

That vision, he writes, “has only a tangential relationship to reality. It is a world of Putin Realpolitik,” –  not the sophisticated kind reflected in the works of Henry Kissinger, where the major powers balance economic, political and security interests.

Rather, Golts stresses, Putin’s Realpolitik is of a far more “primitive” variety that lay behind the actions “of  Bismarck, Metternich and Stalin.”

And that Realpolitik, far more than its “refined” Kissingerian version, he says, leads Moscow to commit forces or threaten to use its nuclear arsenal far more often because the Kremlin leader does not have any other resource or the ability to back down, at least so far, when challenged.

The events in Venezuela over the last week are a demonstration of this.

Two weeks ago (12/05), Venezuelan President Nicolás Maduro visited Moscow, where he was warmly received and promised Russian aid amounting to $6 billion as well as supplies of grain. That assistance, Russian analysts say, was enough to buy Russia the right to land its planes in Venezuela, which can be counted as an “ally” of Russia only because neither country has any other, true allies (Kasparov.ru, 12/12).

Then, in the company of Venezuelan military jets, the Russian bombers conducted a ten-hour flight around the Caribbean Sea (TV Zvezda, 12/10; RIA Novosti, 12/12).

After media reports started drawing parallels with Nikita Khrushchev’s attempt to place Soviet missiles in Cuba in 1962, and following sharp protests from Washington, Moscow announced it had ordered all its planes to return to Russia (TASS, 12/14).

It is distinctly possible that was Putin’s intention all along.

On the one hand, the Venezuelan constitution precludes the establishment of any foreign military base on its territory, although short-term visits by foreign military planes are allowed. And on the other, the Russian planes this time around did not carry nuclear weapons and are sufficiently old not to constitute the kind of threat to the US that missiles in Cuba would have half a century ago.

Moreover, Moscow insisted that its dispatch of planes and their flight over the Caribbean completely conformed to international law (Forum-msk.org, 12/12).

Vladimir Mukhin, a commentator for Moscow’s Nezavisimaya Gazeta, explains the Kremlin’s actions by suggesting that Putin is simply demonstrating a capacity to send Russian forces close to the borders of the United States in response to the United States’ plans to withdraw from the Intermediate-Range Nuclear Forces (INF) Treaty and possibly from other arms control agreements as well.

In short, the dispatch of bombers to Venezuela and their flight over the Caribbean was a political move making use of military means (Nezavisimaya Gazeta, 12/11).

According to the commentator, Russia has had an interest in expanding its military presence in the Caribbean and Latin America more generally since 2008. In that year, it also sent Tu-160 bombers to the same exact airport in Venezuela that it accessed this week.

Subsequently, Russian leaders, including both Putin and Dmitry Medvedev, have pressed for Venezuela to agree to the basing of Russian planes on its territory. Caracas has been willing to accept visits but thus far has not been open to a base. Nonetheless, Mukhin implies, the Russian side hopes that ever more frequent visits may open the way to the establishment of a base de facto if not de jure.

The idea has widespread support in Russian security circles. Shamil Gareyev, a colonel who offers regular commentaries about the military from the Kremlin’s perspective, told Nezavisimaya Gazeta that “using Venezuela for solving the tasks of [Russia’s] Long-Range Aviation is very much the right idea.” They can rotate in and out and show the flag to the Americans.

Colonel Eduard Rodyukov of the Russian Academic of Military Science, agrees. He contended that the latest visit by the Tu-160s is “a clear signal to Trump to reflect on the fact that withdrawing from disarmament agreements will have a boomerang effect” (Nezavisimaya Gazeta, 12/11).

But at a time when Putin continues to raise the stakes, there is a danger of a more immediate kind—the risk that one side or the other will misread such military moves and respond in ways that will lead to escalation. Last week’s events did not have that outcome, but, as Golts warns, with Putin Realpolitik repetitions of them easily could.