2 The Point News » Guest Authors » Members Only » PUTIN THE POSER 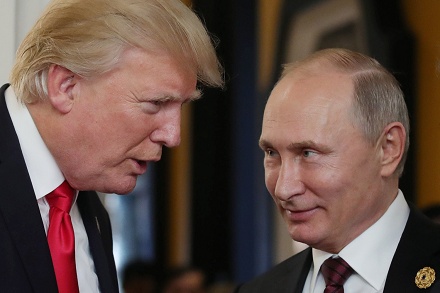 Pretending to be one of the big boys

Grand geopolitical scheming took a break in Moscow last week. The main news—improbably—turned to the fiasco of the government trying and failing, since April 16, to ban the popular instant messenger app Telegram.

The fiasco exposes Vladimir Putin as a “poser” – someone who pretends to know what he’s doing but doesn’t.

Millions of Russians remain blissfully unaware about this “state failure,” but probably as many others are following it with keen interest; in fact, use of this popular app has actually increased since being “blocked” in Russia (RBC, April 19).

The state’s media regulator, known by its Soviet-style name Roskomnadzor, has been trying every means at its disposal to block the virtual channels that carry Telegram messages. But even some government institutions have subscribed to private VPN networks in order to circumvent this blockade (Novaya Gazeta, April 20).

One striking feature of this developing story is that President Vladimir Putin is absent from the picture. He may have vague ideas about how the Internet works, but the desire to tighten the state’s rigidly centralized control over every social and economic development is the essence of his leadership, which at the start of the new presidential term looks markedly shaky.

He is almost certainly behind the effort of the KGB (renamed now as the FSB, Federal Security Service) effort to expand effective censorship over social networks—like is done in China. Yet Putin the Poser cannot quite comprehend that such policy requires a large investment and far greater competence than the infamous “troll factories” can muster (New Times, April 18).

By standing firm, Durov has boldly highlighted this ineptitude of the allegedly almighty special services and also—perhaps inadvertently—put into focus Putin’s indecisiveness, which affects Russia’s policies in Syria and toward the United States as well as in the management of the stagnant economy.

In the aftermath of the missile strike on Syrian bases and chemical labs, carried out by the US, France and the United Kingdom on April 7, the feeling of relief in Moscow has mixed with anti-climax.

Mainstream commentators, who had speculated about the parameters of the possible clash between Russian and US forces, now falsely insist that most incoming missiles were shot down by antiquated Syrian air defenses (Nezavisimoe Voennoe Obozrenie, April 20).

Foreign Minister Sergei Lavrov and Defense Minister Sergei Shoigu have complained to Staffan de Mistura, the United Nations’ special envoy to Syria, that the forceful US action was “untimely” for the Russian-led “peace” process—though the latter amounts to an extermination of all opposition to the Bashar al-Assad regime (Kommersant, April 21).

The strictly limited and carefully targeted strike was indeed sufficient to illuminate the dead end of the Russian policy of ensuring al-Assad’s victory—unacceptable even for Turkey, which for now finds it opportune to keep its partnership with Russia going (TASS, April 16).

Military de-confliction between the US and Russia in Syria works much better than political bargaining. The recent meeting, on neutral ground in Baku, Azerbaijan, between General Curtis Scaparotti, Supreme Allied Commander Europe, and General Valery Gerasimov, the chief of the Russian General Staff, provided another example of this (Nezavisimoe Voennoe Obozrenie, April 20).

Civilian political negotiations, on the other hand, went nowhere at the meeting between the new US National Security Advisor John Bolton and Russian ambassador to the US, Anatoly Antonov (Gazeta.ru, April 20).

Putin remains mum about Syria, swallowing official confirmations from Washington of heavy casualties among Russian mercenaries from the devastating US strike on February 7 ((Newsru.com, February 9, Kp.ru, February 13), while still hoping to convert his long-cherished plan for reducing Russian intervention into a useful bargaining position (RBC, April 16).

US President Donald Trump’s surprising decision to postpone additional sanctions against Russia for its support of the al-Assad regime was a rare gift, which answered Putin’s desire to develop a personal relationship (Newsru.com, April 19). He is seemingly prepared to ignore Trump’s pledges of “toughness” on Russia but takes to heart every signal about a willingness to engage in dialogue.

When Putin chooses to believe what he wants to believe, nobody in Russian politics dares to object, so the discussions in the State Duma about possible counter-sanctions against the US have become entirely irrelevant (Moscow Echo, April 21).

Seeking to outdo one another in “patriotic” zeal, the parliamentarians invented such self-punishing measures that even Sergei Chemezov, Putin’s loyal lieutenant who manages the Rostec corporation, told them to abandon their proposed ban on exporting titanium (RBC, April 20).

Yet, an even more painful shock to the economy would come not from new sanctions but rather from another dip in oil prices. And Trump’s tweet asserting that the “artificially very high” oil prices “will not be accepted” is being taken quite seriously in Moscow (Forbes.ru, April 20).

The fragility of Russia’s current feeble growth prompts some mainstream experts to argue that in order to sustain the confrontation with the West, the country must first improve its economic performance, particularly in the high-tech sectors (Kommersant, April 20). Putin’s meetings with the government, however, produce nothing resembling actual economic reforms.

The last meeting focused on Syria as well as marginal matters of seasonal fire-fighting and converting public transportation to natural gas (Kremlin.ru, April 20).

This indecisiveness and reluctance to address big problems will hardly evaporate after the formal presidential inauguration, scheduled for May 7.

Putin has arrived to the typical autumnal phase of autocratic regimes, when everything appears to be under control while nothing really is.

He appears to resent being played by corrupt courtiers or pushed by “allies” like Syria’s authoritarian leader, but he has nobody else to rely on. His popularity is set to decline, despite all the propaganda accolades.

As such, he fears new protests, like those currently overwhelming the friendly regime in Armenia.

The best option Putin the Poser can offer Russia is stagnant stability. But amidst such prevalent passivity, it takes only a small but motivated minority to reject the status quo.