PUTIN MOVES TO MAKE LIBYA A COLONY OF RUSSIA 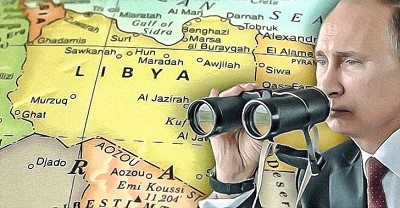 Moscow is deepening its military involvement in Libya while denying to its own people and the world that it is doing so, thus repeating the pattern that the Kremlin has followed in Syria and the Central African Republic.

Libya, with its oil and geographic location, is far more important to Moscow as a counter to the West than even Syria, where the Russians have been deeply involved in the local civil war.

During the Cold War, as Moscow military commentator Pavel Felgenhauer pointed out recently, “Libya was an important link in the USSR’s [Union of Soviet Socialist Republics] global conflict with America and its allies.”

Today, given that Moscow views “the collective West” as “much worse” than it was in the Cold War days, Felgenhauer argues, the Kremlin again is looking to Libya as a base for countering and undermining Western influence (Novaya Gazeta, October 11).

Putin has taken an interest in Libya at least since 2011, viewing the overthrow of that country’s strongman, Muammar Qaddafi, not only as an attack on Russian interests but as a personal affront, the Moscow-based military analyst writes.

And since that time, the Kremlin has actively supported Khalif Haftar, the self-proclaimed Libyan field marshal whose Libyan National Army controls an increasing portion of Libyan territory and especially its key oil fields. Haftar reportedly has asked Moscow for $2 billion in military assistance, at least a portion of which the Russian government has supplied, evading sanctions by sending it through Egyptian channels.

Moreover, Russian PMC employees and “possibly,” Felgenhauer says, regular army special forces have been seen in Libya in recent months, backing Haftar’s forces even though Moscow continues to maintain relations with the internationally recognized “government of national accord” in Tripoli.

But Moscow has its own concerns: Haftar, as the military analyst says, is old and ill—he had a heart attack last spring. And “even with serious Russian military assistance,” the field marshal is unlikely to bring all of Libya under his control.

Consequently, Moscow is making its own broader plans given that “Libya with its oil is much more important than Syria” for the West; and from Moscow’s perspective now, the West is the opponent that must be countered.

On November 7, Haftar made his latest visit to Moscow. Both the participants in that meeting and the way in which Kremlin-controlled media have sought to hide it strongly suggest that the Russian government is now preparing to intervene in Libya in a far more massive way.

Irek Murtazin of Novaya Gazeta says there was nothing surprising in Haftar coming to Moscow or in the fact that Defense Minister Shoigu received him. That has happened many times before. But what was surprising is something that the Libyans leaked and that Moscow has been trying to cover up ever since: the presence of Prigozhin (Novaya Gazeta, November 9).

Immediately following the Moscow meeting, the Libyan Armed Forces released a video showing that Haftar and Shoigu were joined at the session by Prigozhin (YouTube, November 7).

When some in Moscow noticed that the man who oversees several PMCs was present—a possible indication that Moscow intends to dispatch more of them to Libya and thus become more deeply involved in a war there, Murtazin writes—the official media went into full denial mode.

Less than four hours after his original Novaya Gazeta story appeared, he recounts, the Russian government’s information agency RIA Novosti said that Prigrozhin was at the meeting only because he had organized and catered the dinner between the two officials (Novaya Gazeta, November 10; RIA Novosti, November 9).

But that was a patent lie, the journalist contends. The schedules of Shoigu and Haftar meant that, on this occasion, there was no time for any dinner—both had to leave Moscow before they could have had one. Therefore, the presence at the meeting of Prigrozhin, whose nickname is “the cook” because of his earlier role as a restaurateur, was not as a caterer but as something more sinister—almost certainly as the man who has been overseeing the influx of Russian military companies into Libya (Militarynews.ru, November 7).

Moreover, as Murtazin notes, typically such food suppliers are not shown at the table with those they are feeding. Murtazin said his newspaper had queried the Russian defense ministry for an explanation but has not heard back yet (Novaya Gazeta, November 10).

This would appear to follow Putin’s modus operandi of denying what he is doing until he is in a position to take credit for it. But he almost certainly is increasingly in over his head, Felgenhauer suggests in his piece. “In the 1980s,” he recalls, “the USSR took part in foreign civil wars in Afghanistan, Nicaragua, Ethiopia, Angola” and others.

“Today, we are ‘participating’ in Syria, in the Central African Republic, in Donbas and becoming more deeply involved in Libya” (Novaya Gazeta, October 11).

As in Soviet times, he continues, Moscow justifies these actions as necessary to counter the West, forgetting that Russia today has “many fewer resources than the USSR did” and that having gone down this road, it ultimately suffered not only defeat but disintegration.

Nonetheless, and despite exposés like Murtazin’s, Moscow seems committed to sending more forces overtly and covertly to Libya, with all the risks that will entail.  Has Putin bitten off far more than he can chew?