PUTIN IN A BOX 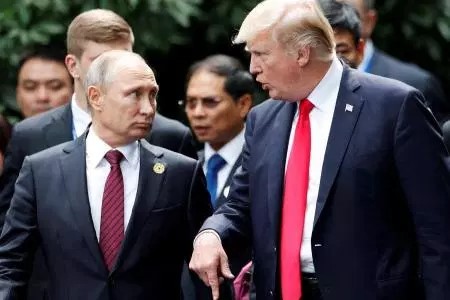 Sensible people make sure they understand the exit strategy when making an investment. Too often, people lock themselves into investments, like timeshares, vehicle loans, real estate purchases, etc. for far longer than they wish they had. The same is also true for personal service contracts, like exclusive arrangements with agents, movie studios, sports teams, etc.

One of the beauties of democracy over other forms of government is that the voters normally “hire” (elect) the politicians for fixed and limited terms. If we are dissatisfied, we can always throw the “bums” out during the next election.

One of the many problems with dictatorships is that there is no simple way to get rid of a ruler who has trampled over basic rights and is unpopular. At the same time, the dictator also has a problem — there may be no simple way to say, “I quit” and then pick up his marbles and go home.

Dictators come in all stripes — from the rare, truly loved and benign, to murderous despots. A few can and do step down to a life of quiet retirement, but most have unpleasant endings.

Mr. Pirchner is a Washington oddity, in that he takes a serious look at the future based on historical probabilities and his in-depth knowledge of many of our adversaries, notably Russia and China. This new book concentrates on Vladimir Putin and Russia.

“If one wishes to know what a society’s elite believes about the future of their country, it is necessary to look no further than what they do with their money and their children. In Russia’s case, most of the elite who collectively keep Putin in power send both abroad. They support Putin because:

2) He permits them to take substantial amounts of that money and their children abroad.”

Other Russia experts have described the system whereby one receives “permission” to invest abroad provided Mr. Putin and his cronies receive part of the investment.

Through such schemes, Mr. Putin is often alleged to have become Russia’s richest man.

Assuming the worst is true, Mr. Putin is in a box. He cannot merely announce that he is going to retire to Monaco or Miami because, once he is out of the country, his successors will have great incentives to “uncover” his business dealings and try to recoup much of what will be argued are stolen goods.

Ambitious prosecutors around the world will have great motivations to find both property crimes and human rights abuses that occurred under Mr. Putin’s decades in power.

Mr. Pirchner has a couple of interesting appendices in his book. In one, he devotes seven pages to listing dictators from many countries over the last hundred years or so and how they met their end. Very few lived to be old, in quiet retirement; most died early in often very unpleasant circumstances.

A modern American president can expect to live many more years than average because of having the best medical care, along with the ability to make very substantial sums of money in speaking fees and book royalties.

Each year that passes makes it more and more difficult for Mr. Putin and other “Presidents for Life” to pull off such a strategy.

Mr. Pirchner’s little book provides a good summary of the main political events of post-communist Russia, many that we have already forgotten. He concentrates on Mr. Putin’s rise to power — a combination of being an astute nationalist and building alliances with those with money — who have every reason to make it a two-way street.

Rather than make it simple by saying this is how and why Mr. Putin will go and what will happen to Russia, Mr. Pirchner approaches the problem in the way that a good intelligence analyst would.

He  first lays out a number of alternative scenarios for the end of the Putin regime and then looks at the probabilities of each scenario, which will leave readers looking for a definitive conclusion — feeling somewhat frustrated — but that is the way life is.

In 1991, after the failed August Putsch, President Boris Yeltsin of Russia named Vadim Bakatin as the new head of the KGB with a mandate to clean it up. But within six months, Bakatin had lost his job.

During his short tenure, I was invited to a small dinner in Washington with Bakatin and former CIA Director William Colby. (I was an economic adviser to the acting Russian prime minister at the time, which is why I was invited.) Relations between the two countries had not been better — before or since — and the discussion was very open.

What struck me was how little each country knew about the actions and motives of the other during the Cold War — as Colby and Bakatin kept asking each other, “Why did you do that?” — in a sincere way to comprehend.

Few understand Mr. Putin and Russians better than Herman Pirchner. It is a must read, for those who need or just want to follow Mr. Putin’s Russia.