America – real America – is in love.  I know I sure am, and I have a lot of company.  Yes, it's platonic love.  After all, she's married and faithful (and so am I!).  Nonetheless, I, like so many millions of Americans, have fallen head over heels in love with Sarah Palin.  She is America's Sweetheart.

That guy is so, like, over.  So yesterday, like the tax-and-spend welfare state liberal-leftie cant he espouses.  Obambi represents the past.  Sarah represents the future.

Which is why my deepest, most passionate desire regarding Sarah Palin is that President Bush order a doubling of the Secret Service detail to protect her.  And then we provide some backup.

Sarah is the Hate-America Left's nightmare.

The pathologically deranged smears of the hate-America moonbats this week have only served to increase enthusiasm and sympathy for her.  The moonbats are in a state of panicked rage because they rightly see in her the capacity to destroy all the myths that give meaning to their angry little lives.

Which means their vicious verbal attacks on her person are going to turn physical.  There are going to be attempts on her life.

I don't want to bum out the celebrating, the elation, the thrill over Sarah – but she has got to be protected.

Thus I am setting up a website with the domain name of protectsarah.com.  Its purpose is to be a clearinghouse for organizing and coordinating civilian protection – particularly by military veterans – of Sarah wherever she goes on the campaign trail.

This would be an adjunct to, and in no way interfering with, her Secret Service protection.  Just peaceful watching over her.

The site isn't set up yet but I hope it soon will be.  She has got to be protected and quickly.  The moonbats will fast become a grave lethal danger to her.

Now here's a question to consider:  to what extent is that danger multiplied by the Other Woman?

That would be Hillary.

Her only chance to be president now is for Obambi to lose, so she can run in 2012.  Thus her plan is to submarine Obambi's candidacy so that McCain is elected, she eats Harry Reid for lunch and becomes Senate Majority Leader, from where she launches her campaign for 2012.

This scenario gets seriously screwed up by Sarah, who will clearly get the GOP nomination if McCain chooses only one term, which is likely.  As pollster Scott Rasmussen has found out, even before Sarah's speech last night, she polls 41% to 52% for Hillary.  In a 2012 race, Sarah would destroy Hillary.

(Just imagine, as some folks on the TTP Forum have, if Sarah picked Bobby Jindal for her VP.)

So the PIAPS is in a box.  She can't let Obambi win, yet Sarah as VP is almost as big an obstacle.  What to do?

One way would see that a Moveon.org/Daily Kos-type moonbat does what we're afraid of.  The outpouring of rage against the left for Sarah's martyrdom would ensure a McCain victory – and the path would clear for 2012.  A two-fer.

We all need to start protecting America's Sweetheart.

Ps:  If my grandfather Lucien were alive, I think he would endorse protectsarah.com – with the caveat, I'm sure, that it helped, not hindered, the Secret Service.  After all, Lucien was the Secret Service's Chief Presidential Bodyguard for four presidents:  (Teddy) Roosevelt, Taft, Wilson, and Harding.  Here he is protecting TR: 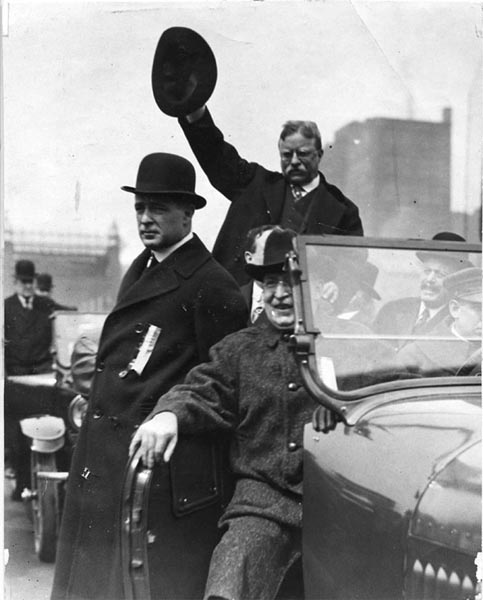