PROSPERITY, THE RULE OF LAW, AND MR. MUELLER 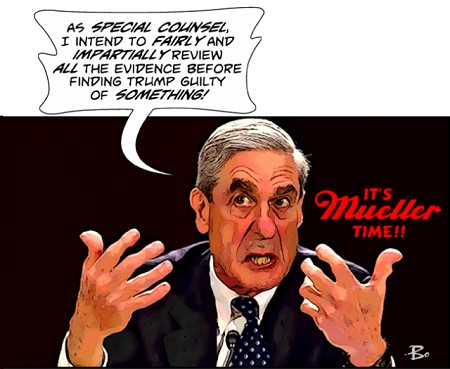 Will China overtake the United States as the world’s largest economy?

The level of economic prosperity is closely tied to the rule of law.

In June, the World Justice Project (WSJ) issued its 2017-2018 Rule of Law Index. To get the country ranking from best to worst, first click on “Country” at the top left of the list, then click on “Score” at the top right.  (The Pdf version only lists countries alphabetically so it’s hard to tease out the rankings.)

This in turn is based on WSJ’s definition of the rule of law as comprised of four universal principles:

Accountability (where both government and private actors are accountable under the law).

Just Laws (where the laws are clear, known, stable, are applied evenly, and protect property and fundamental human rights).

Open Government (where the processes by which the laws are enacted, administered and enforced are accessible, fair and efficient).

Accessible and Impartial Dispute Resolution (where justice is delivered timely by competent, ethical, and by neutral and independent representatives who are accessible).

All high-income countries are in the top quartile when it comes to the rule of law, because without the rule of law investment becomes riskier and thus more costly.

China has grown very rapidly over the last four decades despite weak legal protections. It is now a low middle-income country, not a rich one. Based on historical experience and looking at the present world economic order, I would bet, unless China institutes a true rule of law, that economic growth will slow and eventually cease — without the country ever becoming rich on a per capita income basis.

Investors have many choices as to where to invest — virtually the entire world. They have different appetites for risk — and some are willing to invest in risky situations whether it is a company with an uncertain future or a country that has weak legal and civil institutions.

It is not only investors who are affected by inconsistencies in the rule of law, but also workers, particularly the most highly skilled.

Company executives have to make many judgment calls when dealing not only with investment decisions (where to and how much), but also in dealing with customers, suppliers and government officials.

In countries where the rules are not clear, or elastic, or conflict with other countries’ laws and rules, business and financial executives face another level of risk.

A high level of personal risk, including being subject to physical violence, loss of property, or unknown legal risks discourage the most talented from moving to or at times even visiting countries that lack a strong rule of law.

The United States is no longer in the top 10 countries when it comes to the rule of law. The rule of law is being undermined by the administrative state, where government agencies have been given the authority to not only make law (rules), which is supposed to be the purview of Congress, but then also decide what persons or entities are in violation, and what the punishments will be.

[That is, these agencies create their own law, arrest (with guns) and prosecute those they decide break their laws, then are the judge and jury deciding guilt.  And you have no recourse to an actual court and a real jury until you have bankrupted yourself “exhausting your administrative remedies.” –JW]

Peter Wallison, former general counsel of the U.S. Treasury Department, has just completed an excellent new book, “Judicial Fortitude: The Last Chance to Rein in the Administrative State” (which will be published next month) about the problem and the cure.

The rule of law in the United States is also being undermined by corruption in the U.S. Justice Department and the FBI.

The ongoing Russian investigation has shed some daylight on the problem, but the necessary clean-up operations have yet to be taken. All citizens are supposed to be treated equally under the law, but the double-standard has been obvious to anyone who has been paying attention.

Martha Stewart was sent to prison, not for breaking the law, but for lying to the FBI about an alleged crime that she did not commit. Former FBI Director James Comey was the one who pursued her. Yet, he has been caught on tape under oath contradicting himself about serious matters and still remains unindicted.

Deputy Attorney General Rod Rosenstein drafted the memo recommending the firing of Mr. Comey, and then appointed Robert Mueller as a special counsel, who is alleged to be investigating President Trump for obstruction of justice — for firing Mr. Comey.

There is a laundry list of conflicts of interest with Mr. Rosenstein, yet he refuses to recuse himself or indict those in Justice and the FBI who were apparently guilty of a number of crimes.

Mr. Rosenstein has also blocked disclosure of documents to Congress to which they are entitled, violating the principles of accountability and openness.

The Mueller investigation is rife with conflicts of interests, documented cases of misbehavior, and bias by a number of his investigators and lawyers, in clear violation of the universal principles of the rule of law.

This is a clear demonstration that without a renewal of the rule of law in the United States, liberty will be diminished, and the nation will be less prosperous and less able to meet the Chinese challenge.

Richard W. Rahn is chairman of Improbable Success Productions and on the board of the American Council for Capital Formation