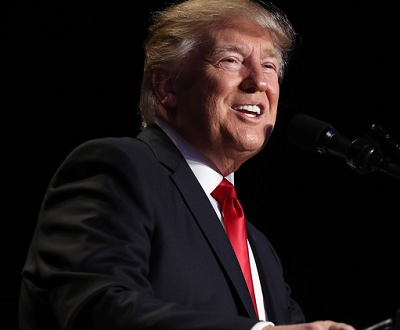 The President speaking this morning

Thank you very much.  It’s a great honor to be here this morning.  And so many faith leaders — very, very important people to me — from across our magnificent nation, and so many leaders from all across the globe.

Today we continue a tradition begun by President Eisenhower some 64 years ago.  This gathering is a testament to the power of faith, and is one of the great customs of our nation, and I hope to be here seven more times with you.  (Laughter and applause.)

I want very much to thank our co-chairs, Senator Bowzman and Senator Coons, and all of the congressional leadership here.

I also want to thank my dear friend, Vice President Mike Pence, who has been incredible.  (Applause.)  And incredible wife, Karen.

But most importantly today, I want to thank the American people.  Your faith and prayers have sustained me and inspired me through some very, very tough times.

All around America, I have met amazing people whose words of worship and encouragement have been a constant source of strength.  What I hear most often as I travel the country are five words that never, ever fail to touch my heart.  That’s:  “I am praying for you.”  I hear it so often — “I am praying for you, Mr. President.”  (Applause.)

No one has inspired me more in my travels than the families of the United States military, men and women who have put their lives on the line every day for their country and their countrymen.

We will never forget the men and women who wear the uniform, believe me.  (Applause.)  Thank you.  From generation to generation, their vigilance has kept our liberty alive.  Our freedom is won by their sacrifice, and our security has been earned with their sweat and blood and tears.

God has blessed this land to give us such incredible heroes and patriots.  They are very, very special, and we are going to take care of them.  (Applause.)

Our soldiers understand that what matters is not party or ideology or creed, but the bonds of loyalty that link us all together as one.

America is a nation of believers.  In towns all across our land, it’s plain to see what we easily forget — so easily we forget this — that the quality of our lives is not defined by our material success, but by our spiritual success.

And I know a lot of people without that, but they have great families, they have great faith.  They don’t have money — at least not nearly to the extent — and they’re happy.  Those to me are the successful people, I have to tell you.  (Applause.)

I was blessed to be raised in a churched home.  My mother and father taught me that to whom much is given much is expected.  I was sworn in on the very bible from which my mother would teach us as young children.  And that faith lives on in my heart every single day.

The people in this room come from many, many backgrounds.  You represent so many religions and so many views.  But we are all united by our faith in our Creator and our firm knowledge that we are all equal in His eyes.

It was the great Thomas Jefferson who said, “The God who gave us life, gave us liberty.”  Jefferson asked, “Can the liberties of a nation be secure when we have removed a conviction that these liberties are the gift of God?”

Among those freedoms is the right to worship according to our own beliefs.  That is why I will get rid of, and totally destroy, the Johnson Amendment and allow our representatives of faith to speak freely and without fear of retribution.  I will do that — remember.  (Applause.)

Freedom of religion is a sacred right, but it is also a right under threat all around us, and the world is under serious, serious threat in so many different ways.  And I’ve never seen it so much and so openly as since I took the position of President.

We have seen unimaginable violence carried out in the name of religion.  Acts of wanton slaughter against religious minorities.  Horrors on a scale that defy description.  Terrorism is a fundamental threat to religious freedom.  It must be stopped, and it will be stopped.  It may not be pretty for a little while.  It will be stopped.  (Applause.)

We have seen — and, by the way, General, as you know, James “Mad Dog” — I shouldn’t say it in this room — Mattis.  Now, there’s a reason they call him “Mad Dog Mattis” — he never lost a battle.  Always wins them and always wins them fast.

He’s our new Secretary of Defense who will be working with Rex.  He’s right now in South Korea, going to Japan, going to some other spots.  And I’ll tell you what, I’ve gotten to know him really well.  He’s the real deal.  We have somebody who’s the real deal working for us, and that’s what we need.  So, you watch.  You just watch.  (Applause.)  Things will be different.

We have seen peace-loving Muslims brutalized, victimized, murdered and oppressed by ISIS killers.  We have seen threats of extermination against the Jewish people.  We have seen a campaign of ISIS and genocide against Christians, where they cut off heads.

So I want to express clearly today to the American people that my administration will do everything in its power to defend and protect religious liberty in our land.  America must forever remain a tolerant society where all faiths are respected, and where all of our citizens can feel safe and secure.  We have to feel safe and secure.

In recent days, we have begun to take necessary action to achieve that goal.  Our nation has the most generous immigration system in the world.  But there are those that would exploit that generosity to undermine the values that we hold so dear.

We need security.  There are those who would seek to enter our country for the purpose of spreading violence or oppressing other people based upon their faith or their lifestyle.  Not right.  We will not allow a beachhead of intolerance to spread in our nation.  You look all over the world and you see what’s happening.

So in the coming days, we will develop a system to help ensure that those admitted into our country fully embrace our values of religious and personal liberty, and that they reject any form of oppression and discrimination.

America will flourish as long as our liberty and, in particular, our religious liberty is allowed to flourish.  (Applause.)

America will succeed as long as our most vulnerable citizens — and we have some that are so vulnerable — have a path to success.  And America will thrive as long as we continue to have faith in each other and faith in God.  (Applause.)

That faith in God has inspired men and women to sacrifice for the needy, to deploy to wars overseas, and to lock arms at home, to ensure equal rights for every man, woman and child in our land.

As long as we have God, we are never, ever alone.  Whether it’s the soldier on the night watch or the single parent on the night shift, God will always give us solace and strength and comfort.

We need to carry on and to keep carrying on.  For us here in Washington, we must never, ever stop asking God for the wisdom to serve the public according to his will.

That’s why — (applause) — thank you.  That’s why President Eisenhower and Senator Carlson had the wisdom to gather together 64 years ago to begin this truly great tradition.

But that’s not all they did together.  Let me tell you the rest of the story.  Just one year later, Senator Carlson was among the members of Congress to send to the President’s desk a joint resolution that added “under God” to our Pledge of Allegiance.  That’s a great thing.  (Applause.)