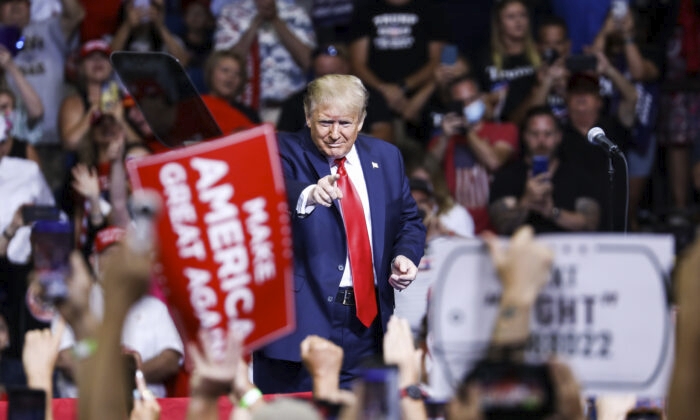 Given the polls, you would think anyone positing Donald Trump has already won the 2020 election is some kind of blithering idiot—and maybe I am. (I’ve been called worse.)

But I can’t help but think that in current conditions the polls are not only not worth the paper they’re printed on, digital or otherwise, they’re about as accurate as a thermometer run over by a six-wheeler.

No one sensible is talking about their political allegiance these days in public—especially to an anonymous pollster.

Why wouldn’t they? Calling 911 has become about as useful as calling tech support for a transistor radio run over by the same six-wheeler.

The destroyed statues are the least of it. They’re inanimate. The actual people of Seattle, Portland, New York, Chicago, San Francisco, Philadelphia and on and on are living a nightmare. Violence stalks the streets of all our major cities whose murder rates are going up stratospherically. (As I type this, the news is reporting 9 more shot in D.C.)

Have there ever been remotely as many stores and businesses smashed, many still not operating, from the Atlantic to the Pacific?

America isn’t in the midst of a civil war. It’s in the midst of a national meltdown with the banana-brained neo-Marxists of (Only) Black Lives Matter and Antifa, stoned like sophomores (if that) on Foucault or some other self-important “critical theorist,” leading the way to oblivion and mutual hatred (actually a return to tribalism).

Don’t these people know Marxism became the greatest mass murder machine in the history of the world? Maybe they don’t care. Or they think they’ll get it right this time—but look around you.

While this is happening the self-described “liberal” leadership (what I define as “moral narcissists”) of these cities and states does nothing, quivering in their shoes until it gets too close to home, as in Seattle when they came to the mayor’s house—forget the little people—or Portland where the infantile mayor works himself into a dither when Trump decides to do something after the city’s been under siege for going on two months. (The Siege of Vienna was only 18 days—and that changed history.)

No wonder police are said to be retiring everywhere.

Whether pent-up energy from COVID or just plain societal madness, everything seems to be spinning out of control.

People talk about the sixties, but I have never seen anything remotely like this and I was born at the tail end of WWII.

And we’re supposed to be honest with pollsters—or even answer their calls?

As Samuel Goldwyn famously said, “Include me out.”

And I am sure I am not alone.

Which brings me to why I believe Trump has probably already won the election. (Okay, the weasel word “probably” is in there—we’re still some months out.)

It should be obvious. Too many Americans are what Kurt Schlicter aptly calls “normals.” These people aren’t just white. They are brown and black and yellow and everything in between.

Some of them are friends and relatives and co-workers who aren’t saying a word about anything, who rarely ever do, who don’t want to get their cars keyed or something a whole lot worse to happen to them. But they are there.

Some of them even cringe at some of Trump’s presumed excesses, but they cringe more at the thought that police will not be there in an emergency for their families. And they’ve seen that happen all around.

They also despise the cancel culture because they are basically good human beings.

They don’t see a difference between “defund the police” or “redirect the funds” because political spin is as familiar to them as apple pie.

They may not have heard of Howard Zinn but they do not want to hear their country being bad-mouthed to their children in school. And they want their children to go to school.

These people, when they walk into the voting booth, are not going to be worrying about whether Christopher Columbus was or was not a racist or whether someone waved a Confederate flag at a NASCAR race.

They are going to be worry about whether they can walk their dog at night without fear of being shot.

And then there’s China.

And then there’s Durham.