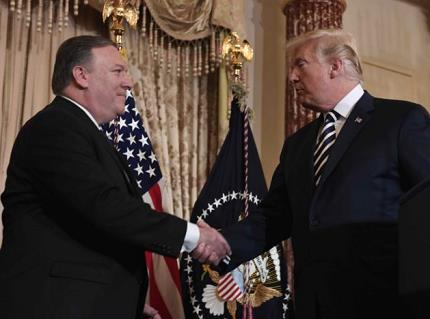 Pompeo made several important arguments in the course of his half hour address, in which he set out President Donald Trump’s policy regarding Iran in the wake of his May 8 announcement that he is abandoning Barack Obama’s 2015 nuclear deal with Iran.

The key line in his speech was, inarguably, “As President Trump said two weeks ago, he is ready, willing and able to negotiate a new deal [with Iran]. But the deal is not the objective. Our goal is to protect the American people.”

The basic insight that there is no intrinsic value to any agreement – or foreign policy initiative of any sort – that does not advance the interests of the United States or protect the American people is striking, because it has been absent from American foreign policy in relation to rogue regimes and entities for better part of the last generation.

In 1994, when then president Bill Clinton sought to contend with North Korea’s illicit nuclear program, the first fantasist president, Jimmy Carter, turned up in Pyongyang to see if there was a deal to be had.

As Claudia Rosett has noted, North Korea was on the ropes back then. Its patron, the Soviet Union, had collapsed three years earlier, and its cash flow had dried up. China was still too poor to pick up the slack, as it had just undergone its first succession. Famine was killing North Koreans by the tens of thousands.

And it had just been caught, red handed, violating the Nuclear Non-Proliferation Treaty, of which it was a signatory, and developing plutonium-based nuclear weapons at its Yangbyon nuclear reactor.

If Clinton had confronted the North Koreans for their duplicity and malign behavior towards the region and towards their own subjects, he stood a decent chance of bringing an end to the regime – 24 years ago.

Instead, following Carter’s odd intervention, Clinton decided to hand the Stalinist hermit gulag state a new lease on life. He sent Wendy Sherman, his special advisor for North Korea, to negotiate what became known as the Agreed Framework.

In exchange for padlocking — but preserving — their plutonium reactor at Yangbyon, the North Koreans received internationally financed light water reactors and some $4.5 billion in fuel and food aid.

The regime was saved, empowered and legitimized by Bill Clinton.

And North Korea’s regime wasted no time in cheating on the nuclear deal — developing intercontinental ballistic missiles; testing them; proliferating their missile and nuclear technologies and know-how to Iran and Syria; and building a nuclear arsenal that now threatens the U.S. and its allies.

But Clinton was happy. He had a deal. He was a statesman. And no matter how much proof surfaced of North Korea’s continued nuclear activity, he and his advisors — and, later, his successors George W. Bush and Obama — were unwilling to do a thing about it.

The notion that it was possible to cut a deal with North Korea was more important than the substance of the deal. The fact that the regime’s policies endangered the American people – not to mention all U.S. allies in Asia and beyond — was beside the point.

The point was the deal.

They considered PLO sponsorship and incitement of terror a mere distraction. The PLO’s partnership with Hamas was said to be a passing phase. PLO corruption and embezzlement of billions of dollars in U.S. and international aid dollars was just an irritant.

The only thing three successive administrations concerned themselves with regarding the Palestinians generally, and the PLO specifically, was whether or not they would say from time to time that they were willing to cut a deal – any deal – with Israel.

As far as all three administrations were concerned, the possibility of mediating a deal — “the deal” — between Israel and the PLO was the only U.S. Middle East policy that mattered. Everything else was secondary. The situation reached a level of absurdity where every issue was viewed as contingent on Israel agreeing to make a deal with the Palestinians.

For instance, in 2006, then-President Bush appointed former secretary of state James Baker and former congressman Lee Hamilton to present him with a strategy for dealing with the insurgency in Iraq. The two men said that the U.S. could safely withdraw its forces from Iraq if it did so while forcing Israel to cut a deal with the PLO.

Why Iran or Syria or their terror proxies in al Qaeda, Hezbollah, and other militias would stand down if Israel gave Jerusalem to PLO chief Mahmoud Abbas was never explained.

It was never explained because as everyone who was anyone in Washington agreed, U.S. foreign policy in the Middle East wasn’t about securing the American people per se. It was about cutting “a deal.”

This, then, brings us to the so-called Joint Comprehensive Plan of Action (JCPOA), better known as the Iran Nuclear Deal, which Wendy Sherman also negotiated. As she did in 1994 with the North Koreans, Sherman negotiated a deal based on the notion that it didn’t matter what the deal said, but rather only that it was concluded.

U.S. foreign policy officials from the Clinton administration on down repeatedly argued that merely signing a deal would create a positive dynamic that would encourage rogue regimes – whether in Pyongyang or Ramallah or Tehran – to change their behavior and assessment of Washington and its allies.

The fact that this assumption has never been borne out by events —  and indeed, has been repeatedly contradicted and proven wrong by events — never made an impression on the foreign policy “experts” who clung to the notion that process is more important than substance.

In this context, the Trump Doctrine is brilliant in its simplicity and straightforwardness.

The Trump Doctrine involves a simple concept: U.S. foreign policy must be grounded in reality rather than fantasy, and its aim is to achieve the only goal that matters: securing and enhancing the security of the American people.

It is a testament to President Trump’s iconoclasm and common sense that he has embraced reality after so many years of fantasy presidencies.

But his decision to prefer reality over theory is also borne of necessity. The bill has come due on his predecessors’ unhinged deals.

As President Trump has noted repeatedly, the U.S. reached the end of the road with North Korea. After Pyongyang tested intercontinental ballistic missiles capable of reaching the mainland of the U.S. last summer, it was clear there was nowhere to kick the can anymore.

With Iran using the status and wealth it received from Obama’s nuclear deal to realize its imperialist aspirations in the Middle East, while actively engaging in armed attacks against Israel and Saudi Arabia, maintaining faith with the nuclear deal that enabled Iran to bring the region to the brink of a massive war was no longer an option.

As for the PLO and Israel, the jig finally is up on that fairytale as well. With its 83-year-old, corrupt, virulently Anti-Semitic, Anti-American, terror-supporting leader Mahmoud Abbas on the verge of death, the Palestinian Authority is about to decompose altogether or transform into something else.

And whatever may happen there, it is now inarguable that the PLO terror group is now a bit player, not a power broker.

No regional issue of concern to the U.S. will be ameliorated by appeasing the PLO.

As for Israel, due to the wreckage of weakened Arab allies on the one hand, and empowered enemies left by Trump’s predecessors on the other, the Trump administration cannot follow the old practice of treating Israel like a problem.

Another undeniable fact is that Israel is America’s most powerful and trustworthy ally in the Middle East. To the extent a deal between the PLO and Israel weakens Israel – and every deal that has been presented over the past 25 years, like the phony “peace process” itself, has weakened Israel – U.S. interests are harmed.

Many commentators have interpreted Pompeo’s list of twelve specific demands from Iran as an opening bid for future negotiations with Tehran.

But his own statements indicate that this is not the case. Pompeo rightly explained that all of his demands — from Iran ending and dismantling its nuclear program and ballistic missiles program, to ending its sponsorship of terror groups; from withdrawing its forces from Syria, to releasing all U.S. and foreign hostages it holds — are basic demands.

There are so many demands, Pompeo explained, because at a fundamental level, Iran is breaching the most basic norms of international behavior.

Every single activity he demanded that Iran halt is an activity that undermines not only regional security, but also U.S. national security. As such, compelling Iranian compliance with the Trump administration’s demands is vital to the security of the American people.

The media echo chamber has made much of the fact that the North Korean regime is now making noises to the effect that it is unwilling to make a deal with the Trump administration.

Insults against National Security Advisor John Bolton and Vice President Pence in the North Korean media are pointed to as proof that Trump’s “America First” foreign policy is undermining efforts to secure a deal with North Korea.

These commentaries miss the point. As Pompeo and Trump himself have explained, American foreign policy is no longer driven by a slavish devotion to Wendy Sherman-esque deals with enemies of America.

American foreign policy is now about making Americans safe in the real world.

And, thanks to the slavish devotion of the previous three administrations to agreements-at-all-cost, achieving the goal of protecting Americans has become urgent, dire, and no job for showboaters who want to be loved by Europe and MSNBC.

It’s a job, rather, for The Trump Doctrine.

Caroline Glick is Deputy Managing Editor of the Jerusalem Post, and the author of The Israeli Solution: A One-State Plan for Peace in the Middle East