2 The Point News » Guest Authors » Members Only » PLEASE, MR PRESIDENT! EXPLAIN TO THE AMERICAN PEOPLE THAT SURVIVAL OF THE REPUBLIC IS AT STAKE

PLEASE, MR PRESIDENT! EXPLAIN TO THE AMERICAN PEOPLE THAT SURVIVAL OF THE REPUBLIC IS AT STAKE 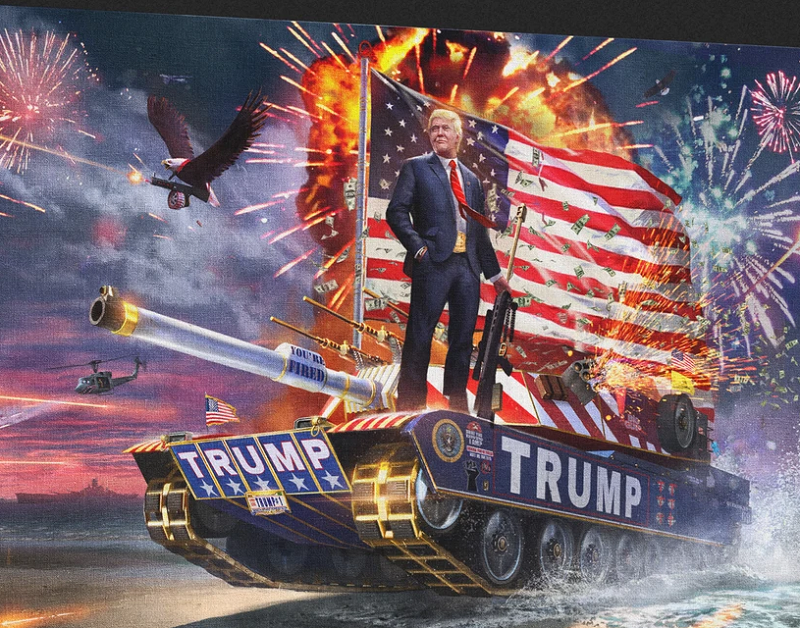 The republic had been failing for nearly half a century.

The great capital city was riven by factions. Graft and corruption were rife. Political opponents were subjected to violence in the streets. Elections were decided by intimidation and bribed electors. The traditions that held the country together for centuries hung by a thread. Dynasties see-sawed.

Finally, two mighty opposing forces faced each other across a river.

And then Julius Caesar crossed the Rubicon.

“Alea iacta est,” he said—the die is cast—and the fate of the Roman Republic was suddenly hanging in the balance.

Karl Marx, the avatar of modern evil, liked to say that history repeats itself, the first time as tragedy, the second time as farce. As another cliché has it, history doesn’t repeat but it sometimes rhymes. But there is nothing farcical about the American political situation at the moment, nor anything particularly lyrical.

President Donald Trump and the forces of real change in contemporary politics are now locked in a death struggle with the Permanent Bipartisan Fusion Party, the unholy alliance of radical Democrats and milquetoast Republicans who have profited mightily from the business-as-usual of Washington practically since Eisenhower left office in January 1961.

Very simply, if Trump wins, the American Republic survives.  If he does not, it does not.

Trump’s media-asserted defeat three weeks ago, and his adamant conviction that the election was stolen from him – by a perfect storm of unnecessarily liberalized changes to voting laws, traditional big-city Democrat political operations, finagled voting machines, statistical improbabilities, ballots of uncertain provenance, and actual vote-changing —have caused one of the biggest political crises in U.S. history.

The president’s refusal to back down and concede defeat while adhering to the only norms that count—his rights under our constitutional, republican form of government—has brought him nothing but criticism from the PBFP, which was stung by his surprise victory in 2016 and has spent the past four years trying to ensure a black swan event like that will never happen again—by any means necessary.

“Why don’t you just play nice, accept the verdict, and give up?” they insist.

This is rich coming from those who refused to accept the outcome of 2016, proclaimed themselves the “resistance,” and have been waging guerilla warfare against Trump and his voters ever since.

Democrats and their partisans have concocted the “Russian collusion” hoax and the imaginary Ukrainian impeachment; some have resorted to violence, such as the armed attack on Republican solons in 2017 by a disaffected Democrat that left Rep. Steve Scalise seriously wounded.

As Caesar was as he returned to Italy, the president and his family have been constantly threatened with lawsuits both private and public, and have been subjected to other ruinous fantasies. And all in the name of a “higher loyalty.”

Beleaguered from the start in his own White House, it’s taken Trump the better part of his first term to wrap his arms around the magnitude of the task the American people assigned to him four years ago: draining the Swamp.

Obama holdovers abounded; outright saboteurs such as James Comey weren’t cashiered quickly enough. Even ostensible allies, such as the hapless Attorney General Jeff Sessions, contributed to the misery. With friends like these …

Fight to the End

And so now, with time running out, Trump is fighting a rearguard battle to save, if not his presidency, then the country’s basic law. As president, he swears the most public oath imaginable to preserve, protect, and defend the constitution as he sees it.

Whether by so doing serves his own immediate interests is beside the point.

What, exactly, is the Democrat/Media complex arguing? That electoral fraud never happens? That because it happens (as it has for more than 150 years) in the poorer precincts of the big cities, the reason must be their all-purpose bugbear, “racism”?

That we shouldn’t care about electoral fraud at all?

So far, so predictable.

But what are we to make of the lawyers who argue with a straight face and a legalistic mind that the remedy—in its most extreme form, throwing out the results of the popular vote in certain precincts or even states—must be weighed against whether the amount of provable fraud was dispositive?

How much fraud are they willing to tolerate? Short-sighted to a fault, all they can see is trees, and never the forest.

That way, however, lies anarchy—and Trump must call his antagonists’ bluff. What Trump, like Caesar, understands is that he can’t back down from this fight, even should he wish to.

During his long campaign in Gaul, Caesar made it a point never to retreat; on one occasion when even the famed 10th Legion temporarily broke ranks during a battle, the chagrined legionaries asked their commander to decimate their ranks for cowardice. (Caesar refused.)

Trump similarly grasps that to stand down now, even in the face of overwhelming opposition—some of it coming from within his own ranks—would spell an ignominious end to his presidency and demoralize his voting legions. To leave an open question of whether our porous and multifarious systems of voting are easily manipulated and therefore untrustworthy would be to do the nation a great – perhaps even mortal – disservice.

As we’ve seen throughout the past four years, appeasement doesn’t work. No matter what the duly elected President of the United States did, there was no satisfying the rabid left and its media lackeys, short of Trump’s expulsion from office, however effected.

And so they mounted one of the strangest counter-campaigns in U.S. political history, rigging their nomination process to spit forth a superannuated, lifelong political hack rushing headlong into his embarrassing dotage and installing as his vice president the dangerous woman they really wanted to head their ticket, but who couldn’t garner any support during the primaries.

It’s a breathtakingly cynical ploy, and a stain on American political history should it succeed.

So please, Mr. President, fight all the way to the end. Until these cases get to court—the big one, located right behind the Capitol—and your augments can be heard over the talking heads and the chattering classes, go on national television and explain to the American people what the stakes really are: not your political survival, but the survival of the Republic itself under a constitution the Left increasingly and openly despises.

Call it a Thanksgiving fireside chat. You still have the bully pulpit. Use it. And then let the evidence be seen and the judgments—both political and historical—rendered. Roll the dice.