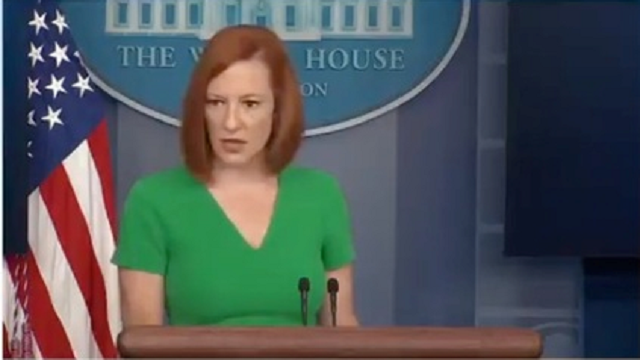 Dying from what? you may ask.  From “misinformation,” which means only information they don’t want you to access, information that might be the actual truth and conflict with the administration’s fear-mongering agenda.

Psaki actually bragged in her White House press conference that the administration is “working with” social media — Facebook — to censor such misinformation.

“Misinformation” is the Newspeak expression for anything that deviates from their party line, much of it legitimate and factual information from epidemiologists, virologists, biologists, and doctors who actually see patients.  Unlike Fauci, who has not seen a patient in thirty years and could not care less about the damage he has done to millions of Americans with his wild and unfounded predictions.

As others have observed, Orwell’s 1984 was intended as not a blueprint for how a government should rule, but a frightening cautionary tale.  This administration is using it as a how-to manual.

We should all be very afraid, for they are coming for us.  Indeed, they are.  As Psaki inadvertently revealed, they have a list, and it is likely that all those who love this nation and fear this administration’s rapid shift to Communism are on it.

They’ve made it clear they mean to compile a database of the unvaccinated.  They would be the people who accessed the information they want to censor and resisted an untested vaccine that was authorized only on an emergency basis when there was no emergency.

COVID has a 99% survival rate.  Most of those who died had multiple co-morbidities — obesity, diabetes, asthma, existing heart failures.  Never before has a vaccine been developed and so aggressively promoted for a disease that is so rarely fatal.  Why might this be?  Good question.

Is there an answer? Well, there are certainly many theories.  Former Pfizer scientist Michael Yeadon has suggested that the vaccines are a depopulation ploy.  He does not endorse the vaccines or the threat of variants.  The CDC reports nearly 11K vaccine deaths and has added a new warning about the J&J shot.  Dr. Peter McCullough says that CDC whistleblowers say the vaccine death toll is at least 50K.

Senator Ron Johnson has released a video of people who “want to be seen, heard and believed.”  All of them have been catastrophically damaged by the vaccines.  As for the mask mandates, they are part of the left’s campaign to terrorize the gullible, those who are easily led by our malevolent and unrepentant media.  They are ineffective and dangerous, especially for kids.  Here are a few links to good info on that topic:

Parents need to rise up and fight mask mandates as they are fighting CRT.  Both are detrimental to their children’s health and future.  True to California’s reputation as Moonbat Central, they are re-instituting the mask mandate, justifying it with a surge that is minuscule.  California is a failed state thanks to decades of Democrat rule.

The Biden administration, along with Big Tech, has been and is still suppressing every dissenting voice it can, but the truth is still out there for all to see and read.

Check out Truth Comes to Light for volumes of expert info Biden/Psaki would like to censor.  Check out Del Bigtree at Highwire for some valuable challenges to the pro-vax diktat.  Whether one accepts the dissenting views on vaccines is a matter of individual choice and research.

Are all the objections to the vaccines rooted in medical science?  Who knows?  They are worthy of consideration, especially because the Democrats are so frenetically anxious for us all to be vaxxed unnecessarily. Why??… since there is virtually no reason for everyone in America to be vaccinated; herd immunity is here, and the variants are not serious.

Hyping the variants is just more fear-mongering, blasted to us all via our corrupt media in service of the left’s Marxist agenda.

That’s their myth that Capitalism inexorably demanded the concentration of capital in ever fewer hands and the reduction of everyone else to wage slavery, which meant being paid only ‘that quantum of the means of subsistence which is absolutely requisite to keep the laborer in bare existence as a laborer.’

This is how the Pelosis have gotten a nine-figure net worth.  So have the heads of Pfizer, Moderna, and J&J.

But does the money angle explain the Biden/Psaki desperation to jab every man, woman, and child, from infancy to old age?  Maybe.  Maybe not.  Whatever the reason for the ruling elite’s hysteria, it’s most certainly not their concern for the health of the American people.

People are dying from the vaccines, thousands of them.  If any previous vaccine had killed a fraction of the number of people the COVID vaccines have, it would have been pulled from the market.  The swine flu vaccine was pulled after three people died.  Doesn’t that fact make it clear that there is another scheme afoot?

As Steve Bannon would say, Psaki said the quiet part out loud when she admitted and then defended the administration’s monitoring and censoring of Facebook, Twitter, probably Instagram, and the rest of social media.  She piled on when she said persons banned on one site should be banned on all sites!

God forbid people might hear a dissenting word.  This administration does not believe in the First Amendment even a little bit.  They are officially Communist/Marxist totalitarians, a menace to and a blight upon this nation.  These are the people condemning people to death, one way or another, with their tyrannical, socialist policies.

And one way or another, we’ve got to stop them.