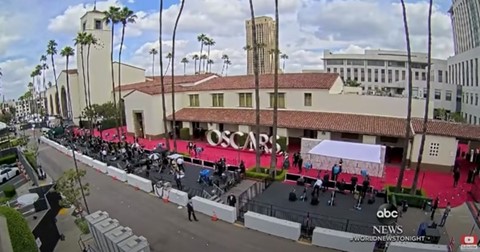 “Racism is the witchcraft of the 21st century, and cancel culture is the stake at which you are burned.”

Most Americans knew exactly what to expect and opted out of the three-hour “horror story,” as Piers Morgan put it.  Regina King’s opening remarks were all it took for millions of televisions to switch channels in the first two minutes.  Yes, this show was going to be an anti-police, anti-American event.  The couple of hundred swells who participated were all on board, clapping for King’s overt anti-everything-but-herself-and-her-pals screed.
Piers Morgan was exactly right when he wrote:

“The tragic truth is that the Oscars as we know it died last night — woked to death by a craven collective desire from those involved to preach not entertain, to lecture rather than make us laugh, and to virtue-signal instead of perform.”

For the Oscar show to be mounted from L.A.’s Union Station, tall fences were erected around the train station and the Kodak Theater.  Scores of homeless people in the area had to be moved.  God forbid those compassionate stars of the screen be bothered by the tragic vision of the vast homelessness that plagues Los Angeles thanks to the Leftist policies that have ruined California.

These are people who do not mingle with lesser beings.

The preening of the Oscar participants was pathetic, what with the Left’s wholesale support of Black Lives Matter and Antifa and the terror and destruction they brought to so many cities throughout the summer (and continue to threaten if things don’t go their way).

But the barbarity of those groups works!  They successfully bullied five of the justices on the Supreme Court.  They successfully menaced the jurors on the Chauvin trial; they voted guilty despite all the evidence that showed George Floyd would have died that day of a fentanyl overdose no matter what Chauvin did trying to restrain him.

But facts don’t matter to the racist anti-racist crowd that is the Democrat party today.

“The Woketard stink is all over everything related to Hollywood and an overall entertainment industry that has made it stridently clear that its long history of entertaining the masses is over. It is no longer about putting on a good show. Instead, we will be lectured and shamed by elite assholes who think they are too important to sing, dance, and make us laugh.”

Too true.  Jack Carr is exactly right: racism is the witchcraft of the 21st-century, and all Caucasian people have been found guilty.  Any and all who do not bow to the witches’ wokery will be canceled.  Try to work in Hollywood if one’s political opinions do not conform to the mandate of those. Nolte again:

“[S]o-called stars [who] are just a cult of pompous, insufferable, blowhards who take themselves oh-so-seriously, even though they have done nothing to earn our admiration or respect. They act as though they are our superiors when we all know they are nothing more than hypocrites and liars who carry a $200,000 gift bag on their laps as they give interviews from the back of a limo about the horrors of wealth distribution and capitalism.”

Obviously, it is not just the clueless wokemeisters of Hollywood who believe themselves to be the harbingers of the totalitarianism they’ve all been working so hard to implement (and yet have no idea what that means).

The Media and the Democrat party are all working toward the same goal: to destroy America as founded.  They have no gratitude at all for the opportunities here that made them all fabulously wealthy.

One must conclude that not one of them knows anything about history, America’s or the world’s.  They might do a bit of reading to grasp how closely the Left is following in the footsteps of Lenin’s Red Terror.  But they are likely not at all interested.  More from Nolte:

“The unearned arrogance is bad enough, but you can also sense just how much Woke Hollywood hates its own audience, how much they all hate everyday people. This hate just pours out of them, every word and look. These idiots might not have much talent, charisma, or smarts, but they do carry an awful lot of hostility.”

Again, too true.  They seem to revel in their ignorance, their self-reverence for being sufficiently woke.  Their disdain for Normal is just as vehement as the rest of the Left’s.  They seem to believe that this contempt makes them special.

Regina King justified her hateful comments because she is the mother of a Black son.  Does anyone think she will raise her boy to commit crimes, join a gang, riot, loot, and resist arrest?  Hopefully not.

Most parents of any and all ethnic persuasions do not, but the blight of fatherless children across the nation has given us what Chicago and Baltimore endure on a daily basis, what the powers in those cities deny, which is why there is zero interest on the Left in Black-on-Black homicide.

There are never any protests over the deaths of the thousands of Black lives lost in those cities, many of them children caught in gang crossfire.  Because of this absolute fact, BLM has no credibility, none.  They are showmen, paid recruits to the cause of canceling America.

The tragedy is that so many duly indoctrinated White young people have bought into the “if White I must hate myself” mantra that is essential to Critical Race Theory.  This abuse is being perpetrated upon children as young as five.

The Left and their handmaidens within Hollywood are beyond arrogant, as the Oscar show demonstrated oh, so profoundly.  Facebook, Twitter, Instagram, et al. continue to cancel anyone who does not meet their woke standard, their requisite submissiveness to the chaos fomented by BLM, Antifa, the media, and the Democrat party.

Their intention is to render those who disagree with them voiceless and irrelevant, canceled in perpetuity, to burn us at the proverbial stake.  The poorest ratings ever for the Oscars, however, suggests that millions of Americans are sick to death of the Left’s brand of witchcraft and cancel culture.