GULBUDDIN AND THE CIA

As many recent commentaries have noted, there was no unified command of Afghan “Mujahaddin” freedom fighters resisting the Soviet occupation of their country in the 1980s. There were about half a dozen major groups and a host of smaller ones.

The legendary commander Ahmad Shah Massoud, assassinated by OBL (Osama Bin Laden) agents just before The Atrocity, belonged to the “Jamiat” group led by Burhanuddin Rabbani. Qari Baba, the famous commander in Ghazni who looked like a cross between Buddha and Genghiz Khan, was part of the Harakat group. Ramatullah Safi was the most outstanding commander of the Gailani group.

THE MYTH OF MECCA

For an increasing number of Islamic historians, the tradition of Mohammed being the source and explanation of the Arab Conquest, wherein Arab tribesmen on horseback emerged out of the Arabian deserts to conquer Syria, Mesopotamia, Persia, Afghanistan, Egypt, Libya and Spain in less than 80 years (636-712), stands history on its head. They demonstrate that the story of Mohammed uniting various Arab tribes as Genghiz Khan did for the Mongols, and providing them with the religious fervor to conquer in the name of Islam, is "sacred history," rather than real history.

Completely Out of the Box

The origin of the phrase “thinking out of the box” comes from an intelligence test called the Nine Dot Box.  Imagine three rows of three dots, each equally spaced some distance apart on a regular piece of paper.  The task is to connect the dots with a  minimum number of lines drawn by a pen or pencil.  The only rules are:  you must draw a line through every dot once and only once, all lines must be straight (no curves), and your pen/pencil cannot leave the paper.

Most people cannot figure out how to do

WHAT LIFE IS ALL ABOUT 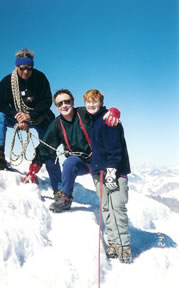 I am writing this in Zermatt, Switzerland. August is a time of year to wish for politics to go away. Besides, when you bother to check the news (maybe once a week or so), the headlines never seem to change: the Arab-Israeli "peace talks" continue to no avail, there are floods in Bangladesh, and so forth.

Why the Clinton White House Went After Microsoft

Head:  Ms. Reno, the president is very concerned that you do the right thing regarding criminal investigations of his administration.

Reno:  That’s reassuring, Richard — may I call you Dick?

Head:  Yes — so we at the White House would like you to prosecute Bill.

Reno (spilling her coffee):  Prosecute the president?  But I thought no matter how massive the evidence against him, I was to stonewall…