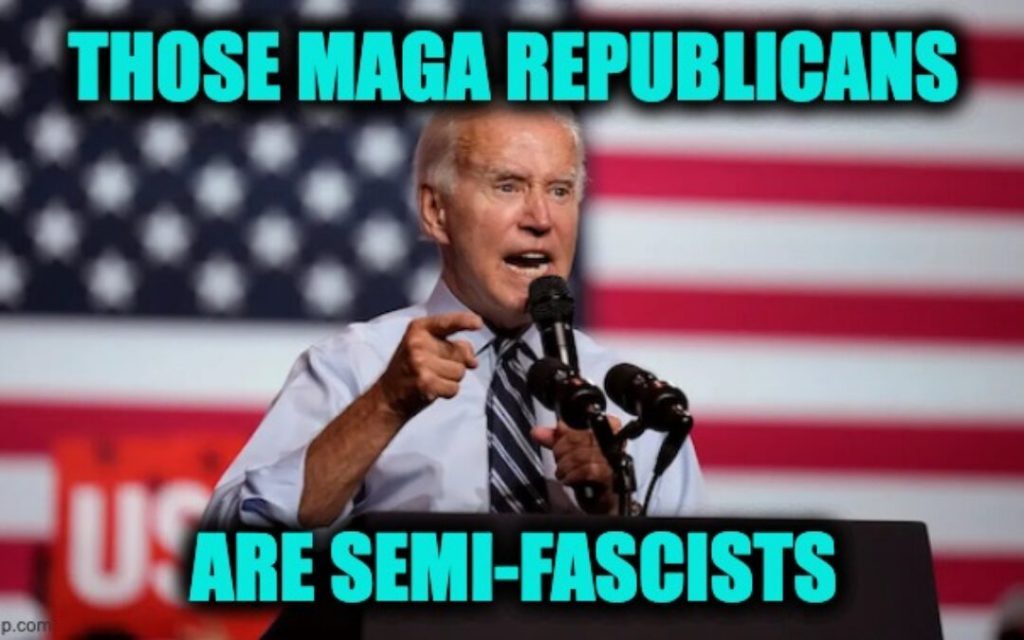 After nearly two years of lies related to the events of January 6, 2021, the regime finally has admitted the truth: The widening legal dragnet to scoop up Donald Trump, his associates, and his voters has nothing to do with the four-hour disturbance on Capitol Hill that afternoon. It is, rather, a thus-far successful crusade to criminalize wrong thinking about the outcome of the 2020 presidential election.

A barrage of subpoenas issued recently by the Department of Justice—U.S. Attorney for the District of Columbia Matthew Graves’ office specifically—against Trump aides is not seeking  information about the Capitol protest but personal communications discussing what happened with the election and plans to fight the results. Graves wants records dating back to October 2020 “constituting any evidence (a) tending to show that there was fraud of any kind in or relating to the 2020 Presidential Election, or (b) used or relied upon to support any claim of fraud in relation to the 2020 Presidential Election.”

Targets must produce correspondence detailing “any strategies or options for ensuring the certification of Donald J. Trump.” Graves also is demanding information about how Trump raised money from “efforts to contest the 2020 election.”

Of course, this is what the January 6 hysteria has always been about. As the chaos unfolded on January 6, Joe Biden and his apparatchiks immediately denounced believers of the so-called “Big Lie”—the claim the election had been rigged, if not stolen, by powerful interests who wanted nothing more than to defeat Trump—and vowed revenge would come swiftly. “The totalitarian company line is any suggestion that election fraud exists is tantamount to sedition,” I wrote on January 11, 2021.

“Americans who dare doubt the results, a popular political sport for Democrats over the past four years, are now vilified as ‘insurrectionists’ and plenty of our fellow countrymen want it punished accordingly.”

Oh, how their dreams have come true. Nearly 900 Americans face criminal charges for mostly nonviolent participation in the Capitol protest; lives have been destroyed, even ended, as a result of this cruel, vengeful prosecution recently rebranded the “Capitol Siege” investigation by Graves’ office.

The weapons used in the first war on terror—secret surveillance, invasive investigation, armed raids, torture, and political prisons to name a few tactics—have been aimed at Trump supporters across the country in a show of force and intimidation.

“Operation MAGA Fascist” appears to be the commander-in-chief’s unofficial name of the regime’s war on terror against millions of Americans, which now is reaching a version of the Battle of Fallujah but without the bloodshed. (Let’s hope.) The unprecedented FBI raid on Mar-a-Lago on August 8 ratcheted up the fever of the war by a considerable measure—the regime’s desired response.

Political leaders and media figures over the weekend remembered 9/11 and equated that attack with the events of January 6 in another brazen comparison between murderous jihadists and Trump supporters. Bragging that the West won the first war on terror, Senator Mark Warner (D-Va.) on Sunday urged Americans to unify in the same post-9/11 “spirit” to defeat “election deniers [and] the insurgency that took place on January 6.”

Homeland Security Secretary Alejandro Mayorkas warned on the 21st anniversary of 9/11 that “anti-government” domestic violent extremists now pose the greatest threat to the nation. Vice President Kamala Harris reminded “Meet the Press” host Chuck Todd that she has taken an oath to protect the country from “all enemies, foreign and domestic” on numerous occasions. “We know they can exist and we must defend against it,” Harris solemnly pledged.

The inflammatory rhetoric is provably false—aside from January 6, Mayorkas could only point to three recent mass shootings perpetrated by lone gunmen with no ties to Donald Trump as alleged examples—but serves the purpose of fueling the raging political fire.

Democrats want nothing more than for “MAGA terrorists” to become a self-fulfilling prophecy. Far from trying to prevent political violence, the Biden regime is turning up the slow, steady burn hoping for an event they can label “Insurrection 2.0” before the midterm elections.

Look no further than Biden’s laughable “Soul of the Nation” speech. Screaming from a set drenched in red light, Biden devoted much of his angry address to those who still won’t support his ill-begotten presidency.

“Donald Trump and the MAGA Republicans represent an extremism that threatens the very foundations of our republic,” Biden ranted from the stage at Philadelphia’s Independence National Historical Park. “MAGA Republicans do not respect the Constitution, do not believe in the rule of law. They did not recognize the will of the people and refuse to accept the results of a free election. MAGA forces are determined to take this country backwards.”

MAGA Republicans, Biden claimed, “embrace anger,” “thrive on chaos,” and “live—in the shadow of lies,” descriptions loaded with irony coming from an angry inveterate liar who has thrown the nation into chaos. Without evidence, Biden further warned that MAGA Republicans have “fanned the flames of political violence.”

Yet that is precisely what Democrats hope to see as a consequence of fixating on January 6.

In just the next few weeks, the January 6 select committee will hold another primetime performance as it threatens to compel testimony from Trump and former Vice President Michael Pence; the seditious conspiracy trial of several Oath Keepers, an alleged militia group involved in the Capitol protest, will begin in Washington, D.C.; and the committee’s final report is set for an October 18 release—all to provide fodder to again show how Trump’s base is populated with “insurrectionists” who tried to “overthrow democracy.”

Now, with the possibility that a third party will scrutinize the Justice Department’s assertions that classified documents were illegally housed at Trump’s residence, House Democrats suddenly announced that the national archivist staffers told Congress the agency isn’t certain it has all required presidential records.

Will this result in another raid of Mar-a-Lago? Or Trump’s summer residence in Bedminster, New Jersey?

But the MOAB in Operation MAGA Fascist will detonate after a D.C. grand jury, working in secret with Biden’s Justice Department, hands down a criminal indictment against Donald Trump.

It isn’t a question of if that will happen, but when.

Will Democrats drop the bomb before Election Day or after? How long can they drag out the dramatics before their own base turns on them?

Either way, the goal is to stoke a political uprising in much the same way these interests accomplished what they wanted on January 6, 2021. It follows a familiar pattern of name-calling, false accusations, and blatant cover-ups in the reckless pursuit of power.

One upside is that Joe Biden and the ruling class have a lousy track record in winning wars. This may end the same but for now there’s little doubt these bloodthirsty war-mongers are gaining ground.

Julie Kelly is a conservative political commentator who writes for The Federalist, National Review, American Greatness, The Hill and elsewhere.