OFF WITH THE HEADS OF THE INTERNATIONAL BUREAUCRACY 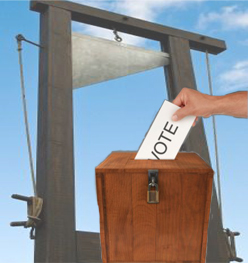 [ssba]The Brexit vote is just the beginning of the revolt against unaccountable institutions and persons. The global political-economic class reacted with horror when a majority of British citizens said “enough is enough,” by voting to leave the EU.

The EU has morphed from a desirable free-trade and free-movement-of-capital organization into an entity that has stripped people of their sovereign rights while, at the same time, attempting to micromanage them in ways many have found to be intrusive and abusive.

Andrew Roberts, writing in the Daily Telegraph, captured the mood:

“The role of bloody-minded insurgents willing to do the opposite of what they’re told by the authorities has been long central to great political events in British history.

Almost every single agency of the international establishment was deployed to thwart them — the IMF, Bank of England, OECD, big business, Goldman Sachs the World Bank, Presidents Obama, Hollande and Abe, the EU Commission The Guardian, Davos, The Times, and so on — yet over 17.4 million people told them precisely what they could do with their expert opinion.”

At the end of World War II, there was the widespread belief that if a number of multinational institutions were established, future wars could be prevented and economic growth and stability could be ensured. Hence, the United Nations (UN), the International Monetary Fund (IMF), and the World Bank (WB) were created, among others.

These institutions were designed to supersede national laws and sovereign rights, all in the name of creating peace and prosperity for the greater good. Now, more than 70 years later, it is obvious that this idealism has not worked out as planned.

The UN has not prevented war — far from it — and the fact that there has not been a third world war has more to do with the development of nuclear weapons.

The UN has been mired in a never-ending series of financial scandals where contributions of the high-income nations have been mismanaged or stolen by many in the so-called developing world and by the corrupt and dictatorial governments that control many UN agencies and departments.

The IMF was set up to manage the international payments system, but with the movement off gold to flexible exchange rates in 1971, the IMF morphed into an overseer of all governments’ financial and monetary management.

Under its tutelage, most of the world governments have become larger, with higher taxes, and the predictable slowdown in economic growth. IMF bailouts of corrupt and incompetent governments may well be increasing systemic risk to the world financial system.

The World Bank was set up to lend governments money for development projects. The fact is, if the governments were competent and honest, they would not need World Bank money, because the private sector would supply all that could be profitably used.

As could have been easily predicted, many, if not most, of the World Bank projects have failed to meet their goals because of incompetence and theft by the recipients.

As the late, distinguished development economist, Lord Peter Bauer, once correctly said, the World Bank is an institution that takes money from poor people in rich countries and gives it to rich people in poor countries.

The Paris-based Organization for Economic Co-operation and Development (OECD) was created in 1961 to promote trade and economic growth among the developed countries. But over the past two decades it has morphed into an institution that supports higher tax rates under the guise of opposing tax avoidance by businesses and individuals, and advocates tax harmonization.

Its ultimate goal appears to be a worldwide tax system where low-tax countries would be forced to pay higher tax rates with the attendant complexity. The OECD is a very clear example of how these unaccountable international bureaucracies change from pro-growth to anti-growth institutions, while their staffs enjoy tax-free salaries and endless perks.

The major central banks, the Federal Reserve, the Bank of England, the Bank of Japan and the European Central Bank, have all moved away from ensuring the stability of the currency and banking system into vehicles to provide low-cost financing of government debts, by stealing the savings of the people through low or even negative interest rate policies.

The American Fed, through its new Consumer Protection Bureau, is in the process of killing the small-loan industry, hence, driving those in need of such loans into the hands of loan sharks.

Most middle-class people do not precisely understand how the establishment and its institutions have been destroying economic opportunity, job creation and growth, but they are increasingly aware they are being “had,” which explains the Brexit vote, the rise of Bernie Sanders, Donald Trump and many populists politicians in Europe.

At the time of the French Revolution, the guillotine was the instrument of choice to purge the unaccountable establishment. Hopefully, this time around, the ballot box will be sufficient to bring those who have been unaccountable for their mistakes and misdeeds to account.

Richard W. Rahn is on the board of the American Council for Capital Formation and is chairman of Improbable Success Productions.