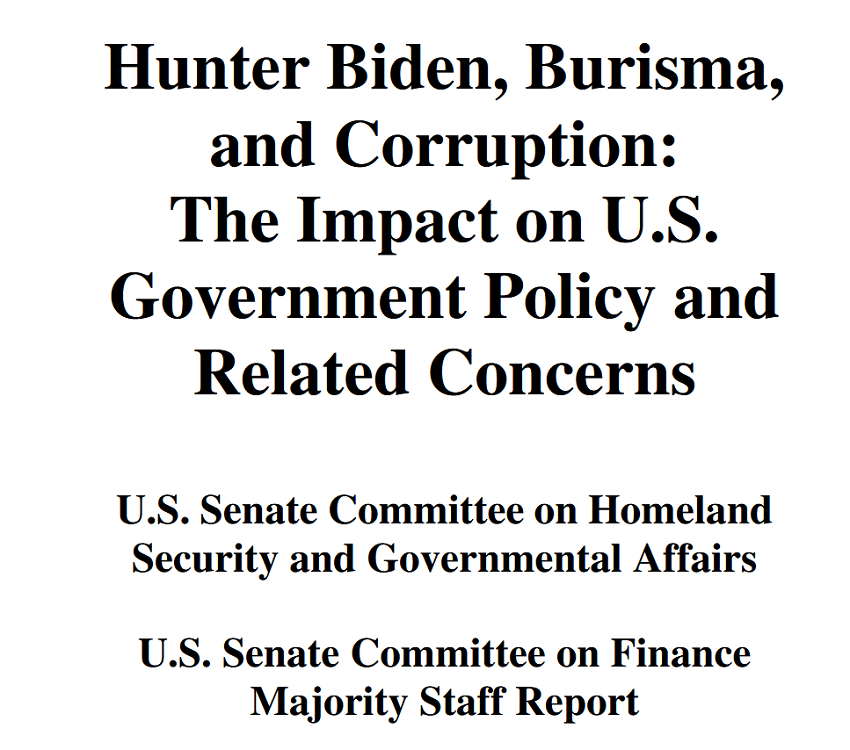 Breitbart: Senate Report Says Joe Biden Allowed Family to Enrich Themselves Abroad While He Was VP

And the headlines on CNN, WaPo, NY Times, or Fox?  Zip, zero, nada – not a word, not a peep.  ROTFLMAO City – let’s see how long they can keep this up.

Not for long, that’s for sure.  The Title of the official Senate Report is above.  Just look at the Table of Contents:

IV.  THE VICE PRESIDENT’S OFFICE AND STATE DEPARTMENT OFFICIALS WERE AWARE OF BUT IGNORED CONCERNS RELATING TO HUNTER BIDEN’S ROLE ON BURISMA’S BOARD.

V.    SECRETARY OF STATE JOHN KERRY FALSELY CLAIMED HE HAD NO KNOWLEDGE ABOUT HUNTER BIDEN’S ROLE ON BURISMA’S BOARD.

VIII.   HUNTER BIDEN: A SECRET SERVICE PROTECTEE WHILE ON BURISMA’S BOARD.

X.       THE MINORITY FALSELY ACCUSED THE CHAIRMEN OF ENGAGING IN A RUSSIAN DISINFORMATION CAMPAIGN AND USED OTHER TACTICS TO INTERFERE IN THE INVESTIGATION.

Then the Executive Summary:

In late 2013 and into 2014, mass protests erupted in Kyiv, Ukraine, demanding integration into western economies and an end to systemic corruption that had plagued the country. At least 82 people were killed during the protests, which culminated on Feb. 21 when Ukrainian President Viktor Yanukovych abdicated by fleeing the country. Less than two months

later, over the span of only 28 days, significant events involving the Bidens unfolded.

The day after his visit, on April 22, Archer joined the board of Burisma. Six days later, on April 28, British officials seized $23 million from the London bank accounts of Burisma’s owner, Mykola Zlochevsky. Fourteen days later, on May 12, Hunter Biden joined the board of Burisma, and over the course of the next several years, Hunter Biden and Devon Archer were paid

millions of dollars from a corrupt Ukrainian oligarch for their participation on the board.

The 2014 protests in Kyiv came to be known as the Revolution of Dignity — a revolution against corruption in Ukraine. Following that revolution, Ukrainian political figures were desperate for U.S. support. Zlochevsky would have made sure relevant Ukrainian officials were well aware of Hunter’s appointment to Burisma’s board as leverage. Hunter Biden’s position on the board created an immediate potential conflict of interest that would prove to be problematic for both U.S. and Ukrainian officials and would affect the implementation of Ukraine policy.

During the Obama administration, the Committee on Foreign Investment in the United States (FIUS) approved a transaction that gave control over Henniges, an American maker of anti-vibration technologies with military applications, to a Chinese government-owned aviation company and a China-based investment firm with established ties to the Chinese government.

One of the companies involved in the Henniges transaction was a billion-dollar private investment fund called Bohai Harvest RST (BHR). BHR was formed in November 2013 by a merger between the Chinese-government-linked firm Bohai Capital and a company named Rosemont Seneca Partners. Rosemont Seneca was formed in 2009 by Hunter Biden, the son of then-Vice President Joe Biden, by Chris Heinz, the stepson of former Secretary of State John Kerry, and others.2

Access to relevant documents and testimony has been persistently hampered by criminal investigations, impeachment proceedings, COVID-19, and several instances of obstructive behavior. Accordingly, this investigation has taken longer than it should have. The Chairmen’s efforts have always been driven by our belief that the public has the right to know about

wrongdoing and conflicts of interest occurring within government, and especially those conflicts brought about by the actions of governmental officials. This is a good-government oversight investigation that relies on documents and testimony from U.S. agencies and officials, not a Russian disinformation campaign, as our Democratic colleagues have falsely stated.

What the Chairmen discovered during the course of this investigation is that the Obama adinistration knew that Hunter Biden’s position on Burisma’s board was problematic and did interfere in the efficient execution of policy with respect to Ukraine. Moreover, this investigation has illustrated the extent to which officials within the Obama administration

ignored the glaring warning signs when the vice president’s son joined the board of a company owned by a corrupt Ukrainian oligarch. And, as will be discussed in later sections, Hunter Biden was not the only Biden who cashed in on Joe Biden’s vice presidency.

This report not only details examples of extensive and complex financial transactions involving the Bidens, it also describes the quandary other U.S. governmental officials faced as they attempted to guide and support Ukraine’s anticorruption efforts. The Committees will continue to evaluate the information and evidence as it becomes available.

* In early 2015 the former Acting Deputy Chief of Mission at the U.S. Embassy in Kyiv,      Ukraine, George Kent, raised concerns to officials in Vice President Joe Biden’s office about the perception of a conflict of interest with respect to Hunter Biden’s role on Burisma’s board. Kent’s concerns went unaddressed, and in September 2016, he emphasized in an email to his colleagues, “Furthermore, the presence of Hunter Biden on the Burisma board was very awkward for all U.S. officials pushing an anticorruption agenda in Ukraine.”

* Although Kent believed that Hunter Biden’s role on Burisma’s board was awkward for all U.S. officials pushing an anti-corruption agenda in Ukraine, the Committees are only aware of two individuals — Kent and former U.S. Special Envoy and Coordinator for International Energy Affairs Amos Hochstein — who raised concerns to Vice President Joe Biden (Hochstein) or his staff (Kent).

* The awkwardness for Obama administration officials continued well past his presidency. Former Secretary of State John Kerry had knowledge of Hunter Biden’s role on Burisma’s board, but when asked about it at a town hall event in Nashua, N.H. on Dec. 8, 2019, Kerry falsely said, “I had no knowledge about any of that. None. No.” Evidence to the contrary is detailed in Section V.

* Former Assistant Secretary of State for European and Eurasian Affairs Victoria Nuland testified that confronting oligarchs would send an anticorruption message in Ukraine. Kent told the Committees that Zlochevsky was an “odious oligarch.” However, in December 2015, instead of following U.S. objectives of confronting oligarchs, Vice President Biden’s staff advised him to avoid commenting on Zlochevsky and recommended he say, “I’m not going to get into naming names or accusing individuals.”

* Hunter Biden was serving on Burisma’s board (supposedly consulting on corporate governance and transparency) when Zlochevsky allegedly paid a $7 million bribe to officials serving under Ukraine’s prosecutor general, Vitaly Yarema, to “shut the case against Zlochevsky.” Kent testified that this bribe occurred in December 2014 (seven months after Hunter joined Burisma’s board), and, after learning about it, he and the Resident Legal Advisor reported this allegation to the FBI.

* Andrii Telizhenko, the Democrats’ personification of Russian disinformation, met with    Obama administration officials, including Elisabeth Zentos, a member of Obama’s National Security Council, at least 10 times. A Democrat lobbying firm, Blue Star Strategies, contracted with Telizhenko from 2016 to 2017 and continued to request his assistance as recent as the summer of 2019. A recent news article detailed other  extensive contacts between Telizhenko and Obama administration officials.

* In addition to the over $4 million paid by Burisma for Hunter Biden’s and Archer’s board memberships, Hunter Biden, his family, and Archer received millions of dollars from foreign nationals with questionable backgrounds.

* Hunter Biden received a $3.5 million wire transfer from Elena Baturina, the wife of the former mayor of Moscow.

* Hunter Biden had business associations with Ye Jianming, Gongwen Dong, and other Chinese nationals linked to the Communist government and the People’s Liberation Army. Those associations resulted in millions of dollars in cash flow.

* Hunter Biden paid nonresident women who were nationals of Russia or other Eastern European countries and who appear to be linked to an “Eastern European prostitution or human trafficking ring.”

That’s for openers. The rest of the 87 page report details all the above.

Here is the full text of the Senate Report.  It is an irrefutable documentation of Biden pathological mendacity.

It will be morbidly fascinating to see how our fascist-commie media’s pathological mendacity will try to squirm the Biden Mafia out of this.

The Senate Report is a stunning early October Surprise.  The one caution is that it provides POTUS with such a super-abundance of ammo against his pathetic opponent on their first debate next Tuesday (9/29), he’ll have to carefully pick only the choicest most obliterative rounds to blow Joe away.

What fun to watch which ones he’ll choose.