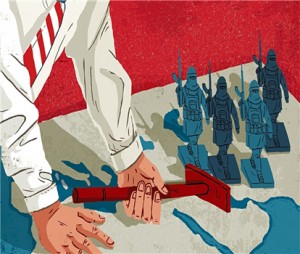 [ssba]For those who thought that America was stealthily pulling out of the Middle East in pursuit of a policy of gradual disengagement pursued by Obama, a shocking truth is beginning to unfold. Far from disengaging, the Obama administration has for some time now actually been forming a de facto alliance with Iran in its war against the Sunni Arabs.

Exploiting the conflict against Daesh (ISIS) as an opportunity to ethnically cleanse the Sunni Arab population of al-Anbar and other provinces in Iraq, the Iranian regime has poured military personnel and resources into the sixty separate and predominantly Shi’ite militias operating in that country.

These militias, commanded by the Islamic Revolutionary Guards Corps Qods Force leader – General Qassem Soleimani – have arrested, tortured, butchered and beheaded many thousands of innocent Sunni men and even boys, during their fight to ‘liberate’ the Iraqi cities of Tikrit, Ramadi and Fallujah.

The few houses that are left standing, following relentless bombing by American aircraft, are being burned down by the sectarian Shi’ite militias. Iran and its so-called allies are ruthlessly razing these once great and ancient Iraqi cities to the ground and virtually annihilating their occupants.

The leader of one of the Iranian-backed Shi’ite militias said last week: “There are no patriots, no real religious people in Fallujah. It’s our chance to clear Iraq by eradicating the cancer of Fallujah.” This is the reality of the Iranian regime, with which the  Obama administration is allied –  it is a regime hell-bent on a campaign of genocide across Iraq, Syria, Libya, Lebanon, Palestine, Yemen, Bahrain and ultimately Saudi Arabia and Israel.

The next target for the Iranian-backed militias is Mosul, Iran’s second largest city and home to over two million Sunnis. American airstrikes have already begun around the outskirts. An unprecedented human catastrophe will quickly develop unless the West wakes up and exposes Obama’s duplicity.

The only way to combat Daesh (ISIS) is to recruit and engage the Sunni tribes in Iraq. They are best placed to root out the Daesh terrorists who have occupied their homeland for the past two years.

But the Sunni tribal leaders have good grounds to believe that America has now joined forces with Iran to wage war on the Sunni Arabs and they will be reluctant to help a coalition that may inevitably lead to their own destruction at the hands of sectarian Iranian-backed Shi’ite militias.

Obama’s desperate push to sign the nuclear deal with Iran should have been the clearest signal to the world that he was carving out a new and dangerous alliance.

The Joint Comprehensive Plan of Action (JCPOA), commonly known as the Iran nuclear deal, was signed in Vienna on July 14, 2015. It was widely promoted by U.S. and EU officials as a foreign policy breakthrough, although much of the detail was kept under wraps.

Only now is the true picture beginning to emerge and it makes for disturbing reading.  Last week (7/18) the Associated Press published a leaked document which showed that the deal will allow Tehran to enrich uranium 11 years after the agreement was implemented and not 15 years as previously announced.

The Iranian regime reacted furiously to this revelation, claiming that the West was now guilty of violating the agreement by leaking this secret information to the media.

It has now become clear that the deal was quite one-sided, containing page after page of clauses relating to the lifting of sanctions, in return for which we got very little, apart from a few scant paragraphs detailing Iranian cooperation in slowing down its nuclear enrichment process for a period of up to 15 years, which we now know in fact to be much less.

As far as scrutiny of the nuclear program is concerned, regular inspections by the International Atomic Energy Agency (IAEA) are limited to the Natanz site in Isfahan Province, the country’s main underground nuclear facility with over 19,000 operational centrifuges. Natanz itself was first revealed by the PMOI opposition group in 2002; until that point it had been a closely guarded secret site.

The agreement states that: “Iran will permit the IAEA regular access, including daily access as requested by the IAEA, to relevant buildings at Natanz.” The fact that only ”relevant” buildings will be accessed and only at Natanz is perhaps indicative of how Iran intends to restrict inspections to the bare minimum.

The West was reassured by a clause that stated: “For 15 years, the Natanz enrichment site will be the sole location for all of Iran’s uranium enrichment related activities including safeguarded R&D.”

So that’s all right then, we can trust the Iranian regime who previously hid all their nuclear facilities, to centralize their nuclear enrichment processes at one site which will be open for regular inspection! The agreement goes on to say that access is prohibited to all military sites, which of course is where most of the on-going nuclear activity is now concentrated.

It should be remembered that Iran entered into nuclear negotiations because, following the whistleblowing of the Iranian resistance, sanctions had crippled the Iranian economy. Nevertheless to capitulate to almost every Iranian demand exposed a level of weakness that has been eagerly exploited by the mullahs ever since.

The lifting of sanctions released an estimated $150 billion in frozen assets, providing a windfall for a regime whose biggest export is terror; a regime which funds Hezbollah in Lebanon, Bashar al-Assad in Syria, the Houthi rebels in Yemen, and the brutal Shi’ite militias in Iraq.

Now Vladimir Putin has commenced the delivery of S-300 surface-to-air missile systems to Iran. North Korea has also been an active partner with the regime in supplying weapons technology; frequent visits by senior North Korean missile experts to Tehran have confirmed fears that the mullahs are accelerating the size and quality of their intercontinental ballistic missile capability.

This activity led to a report on July 7 from UN Secretary General Ban Ki-moon criticizing Iran’s regional and missile activities. The report stated that the ballistic missile launched by Iran in March was at odds with the U.N. deal and “not consistent with the constructive spirit” of the nuclear agreement.

Again this caused a furious outburst in Tehran and threats to tear up the nuclear pact.

Tension is mounting internationally as the flaws of the nuclear deal are repeatedly uncovered and Iran’s aggressive expansionist policy in the Middle East, to cover its internal fragility and weakness, is exposed.

Now is the time to expose Mr. Obama’s war alliance with Tehran,  and for a complete re-think of US Middle East policy before it is too late.