OAMU – A FIELD MANUAL ON ORGANIZING A MASS UPRISING 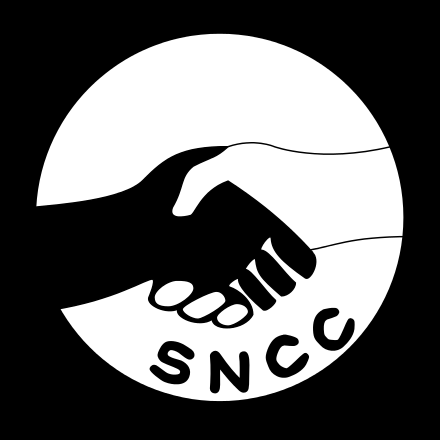 [Note by JW:  As freedom is being extinguished in a post-Trump America, the principal hope of regaining it is mass peaceful civil disobedience.  TTPer Dale Woolridge has written a manual on how to achieve this.  It will be presented in a series of installments on Mondays.  We expect a lively discussion of his method, strategy and tactics on the Forum, and encourage you to participate]

“America was born of protest, revolution, and mistrust of the government. Subservient societies neither maintain nor deserve freedom for long.” Ron Paul

This manual describes a method for organizing mass uprisings. The method was used with great effect during the American civil rights movement of the early 1960s by a little-known group called the Student Nonviolent Coordinating Committee (SNCC, pronounced “Snick”).  Note its logo above of racial cooperation, rather than the antagonism of today:

SNCC was by far the most effective force behind the movement. It was at least a major participant, and usually the creator, of almost all of the major developments of the civil rights movement.

The method gave SNCC operatives, called “field secretaries,” the ability to engage the participation of large numbers of ordinary people, who were empowered to rise up by the thousands against the poor treatment of black people in many areas of the United States.

If you were around during this period you experienced a volume of activism unlike anything since in the United States. Some events were big extravaganzas, perhaps featuring Martin Luther King, Jr. as the central figure. Others were small actions on street corners or in public parks.

There were protests, marches, demonstrations, sit-ins at whites-only lunch counters, school strikes, walkouts, and all sorts of disruptive actions coming from every corner of the nation. Around mid-1963 the struggle turned in favor of the pro-black activists, despite the weapons of oppression — bullets and bombings, police dogs, fire hoses, tear gas – sometimes used against them.

The media reported black students being enrolled in certain universities for the first time. More and more blacks were becoming voters, although decades of violence had previously prevented them from registering. Lunch counters, churches, and facilities of all sorts were desegregating.

SNCC fingerprints were everywhere. The historian Taylor Branch examined a ten-week period in mid-1963 and counted 758 racial demonstrations in 186 cities involving 14,733 arrests. And the elevated levels of activism continued month after month, well into the year 1965.

Times of exceptionally high levels of grassroots activism have occurred before in American history. Frances Fox Piven, in her recommended book, Challenging Authority: How Ordinary People Change America, analyzed two such periods and found legislative frenzies inside both.

In the areas of welfare, labor, and civil rights, almost all American legislation of consequence was enacted in just two brief “big bangs,” the years 1933-38 and 1963-68.

The years 1963-68 brought the Civil Rights Act of 1964 and another civil rights act in 1968, the Voting Rights Act of 1965, Medicare, Medicaid, anti-poverty programs like Head Start, and much more.

Could it be that exceptionally high levels of grassroots activism cause big bangs? Well yes, according to Piven, and she presents a plausible theory of the causal mechanism linking a certain kind of activism to political change.

In brief, your goal as an activist is not to win the hearts and minds of the nation and its political leaders, but to make those leaders fear that their constituents won’t reelect them if they don’t fix what needs to be fixed. As John Wayne explained: 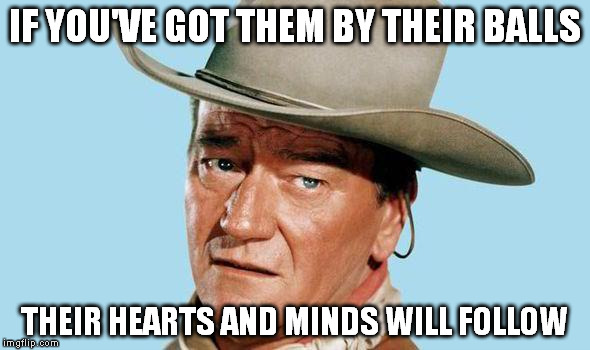 It is our great fortune that the behemoth black uprising in the early 1960s left behind a large body of documents that were thoughtfully collected and, thanks to Google and the internet, can be easily accessed and studied.

SNCC and their fellow rebels sat for many interviews, wrote many books and articles, appeared in many videos. We have old newspaper articles, file notes from meetings, even records from Mississippi’s domestic intelligence agency, which was spying on the rebels.

If you spend enough time reading these materials you will gain a clear understanding of the method as well as insight into the minds of rebels and the inner workings of a major rebellion. Gaining this knowledge would not require an IQ of two zillion, since the rebels themselves tell in the plain language of ordinary people exactly what they did, why, and how.

This manual uses the SNCC experience as an example of how to rise up. Chapter Two is about the SNCC way of finding and recruiting the right people and starting to build a local activist organization.

Chapter Three is about meetings, how people can work together effectively to solve problems and make decisions.

Chapter Four is about efficacy, the magic that turns conquered populations into effective revolutionaries.

Finally, Chapter Five presents Piven’s “Five D’s” model, which is a practical tool for understanding and using her theory. It breaks the theorized process into five components so that each can be focused on independently. It is intended to promote fresh thinking on the topic of revolution so that we can do it in a better way.

There are two areas of knowledge that activists must master to bring about a successful mass uprising. The first area is about what must be done. The other area is about how to do it, how to engage the participation of enormous numbers of ordinary people, transform them from sheep into wolves, tap their intelligence and creativity, and help them act as a unified fighting force.

Thus, the Five D’s model and Piven’s theory is about how all the marching, trouble-making and rabble-rousing can cause laws to change.

William Zebulon Foster, a future national chairman of the American Communist Party[1], was then considered one of the very best labor organizers in the United States. He organized workers in the meat packing industry and then became a leader of the Great Steel Strike of 1919, in which 365,000 workers went out on strike.

The steel strike failed for reasons beyond Foster’s control, but by the mid-1930s he was at it again, even more ambitiously. In 1936 he published his pamphlet, “Organizing Methods in the Steel Industry.” The following year he published another pamphlet, “What Means a Strike in Steel,” which discussed strategy and tactics as well as organizing methods and was considered the “Bible” for labor organizers.

It was in wide use during the 1930s. As you can see in the links above, both pamphlets are online. And guess what? The Foster method is basically the same as SNCC’s. It is slightly cruder and is missing SNCC’s methods of conducting meetings (Chapter Three of this manual) and SNCC’s emphasis on efficacy (Chapter Four.)

We are going to be throwing some of Foster’s points into our field manual to add emphasis. Would the method work today? Maybe so.

In1946, the union share of the American workforce reached a peak of 37%. In subsequent years that number fell, reaching about 10% by the end of the century. Many union leaders and researchers have offered possible explanations for the decline, but one fact stands out: certain union locals are doing very, very well today.

Understanding why certain locals succeed while others don’t would take us too far beyond the scope of this manual. Students interested in the topic might want to check out a book by Bronfenbrenner, et. al., Organizing to Win, published in 1998, and another by McAlevey, No Shortcuts, published in 2016.

But we can say that the organizing techniques used by today’s successful locals, as described by the above authors, look a lot like those used by Foster and SNCC.

This Introduction’s conclusion: All signs point to the exciting possibility that we have a road map to a world having less overbearing governments and more self-determining people.

Dale Woolridge has been a TTPer since 2004. He holds a scientifically-oriented Ph.D. in social psychology and has been a government manager and conservative political activist.

[1]  Foster remained a straightforward Stalinist all his life.  In 1932 he authored Toward A Soviet America. He moved to Moscow at age 80 where he died in 1961. The Soviet government gave him a state funeral in Red Square personally attended by Nikita Khrushchev . [Note by JW]